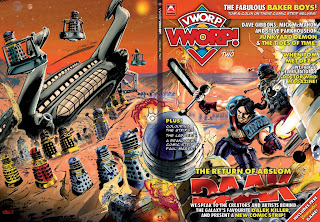 
Vworp Vworp! is a magazine dedicated to Doctor Who Magazine ... and in particular to the comic strip it publishes. Issue two has just been published after a year's wait following issue one, and it's something that is well worth waiting for.

My copies (yes, there are two variant covers available for the magazine) arrived bagged, and opening the plastic bag, what should fall out but free gifts!  Not just any old tat, but some new games called 'Vworpabix' - based on the 1970s Weetabix Doctor Who giveaways, the team have lovingly created some new ones using new series characters. More than that, there are even some stand up figures to play the games with. Now. Listen up. This is seriously impressive. It would have been fairly straightforward to have created the art and printed the figures up so that you could cut them out with scissors. But that's too simple for the Vworp Vworp! team ... the figures are scored and perforated just as the original Weetabix ones were!  You have no idea how much that simple factor impressed me! 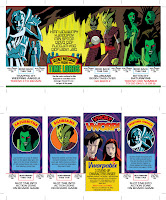 But this attention to detail is what marks this fan magazine out. It is simply gorgeous. 102 pages. ALL in full colour. Containing pictures and interviews, facts and figures, and stuff which simply has never been seen before. There are interviews with the first few editors of Doctor Who Weekly/Monthly - from the inspirational Des Skinn, through to Sheila Cranna. There is an extensive section looking at Absalom Daak - Dalek Killer ... covering all the ideas and aspirations that his creators had for him which never came to fruition. There are interviews with artists like Dave Gibbons, Steve Parkhouse, David Lloyd and many others. There's a new comic strip by Paul Magrs. A strip featuring the Adipose and even another 'Star Tigers' strip - continuing the adventure already seen. 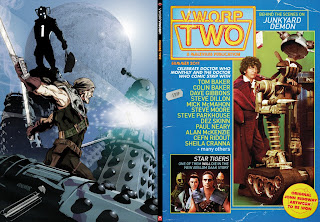 But raving about this magazine cannot do it justice. It is every bit as professional and as absorbing as Doctor Who Magazine itself. The writing is interesting, the layout amazing, and the whole thing just reeks of quality, professionalism, enthusiasm and WOW all rolled into one.

Seriously. If you are remotely interested in the Doctor Who comic universe and the history of Doctor Who Magazine, then this is an essential buy.

More information and ordering of copies can be done online at http://www.vworpvworp.co.uk/. Note that as of the date of writing, ordering is temporarily suspended due to the demand! But they say that ordering will be reopening soon.