I've never 'got' Roleplaying Games. I've always been more interested in reading and watching film and television to take part in Dungeons and Dragons or other game activity, and so the whole genre has mostly passed me by. 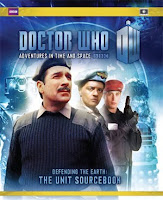 One thing I have observed, however, is that some of the assets produced for these games are rather lovely, and can range from gorgeous little metal figures to books and boxed sets which far surpass many other items on the market. And so it is with The UNIT Sourcebook, a hardbacked book published to accompany a game called Adventures in Time and Space. The publisher is Cubicle 7, a UK-based company, but the game seems to be primarily targeted at America and thus features dollar prices on the packaging and so on.

The UNIT Sourcebook is, as it suggests, a guide to all things UNIT, and the writers - Will Brooks, David F Chapman, Alex Gutteridge, Gareth Ryder-Hanrahan, Andrew Peregrine, Gareth-Michael Skarka and Jason Vey - really go the extra mile. Every element of UNIT is covered, from all the TV stories and appearances through analysing their modus operandi, how they are structured, weapons, Bases, Personnel and everything in between. It's the ultimate factual guide to UNIT!

Add to this a beautiful layout from Paul Bourne, graphic design by Bourne and Lee Binding and a cover from Binding, and you have a stunning volume, packed with photographs and interest. Okay, the latter chapters move more into how to use UNIT as part of a role playing game, and giving mission suggestions and plot ideas to develop - and some of these are worthy of being television episodes themselves! - but these only cover the last third of the book, leaving lots and lots for the Doctor Who fan who is not into Roleplaying Games to enjoy and consume.

More information on the book can be found on the Cubicle 7 Website here: http://www.cubicle7.co.uk/our-games/doctor-who-aitas/defending-the-earth-the-unit-sourcebook/