I a massive fan of Doctor Who on Audio, and also, of course, a fan of the old Target books ... so I was especially pleased to see that those lovely people at BBC Audio have a Myspace Page now all about the titles. There's even an excerpt from the forthcoming reading of Doctor Who and the Doomsday Weapon on there :) http://www.myspace.com/bbcaudio_classicdoctorwho
Posted by David at 10:47 pm No comments: 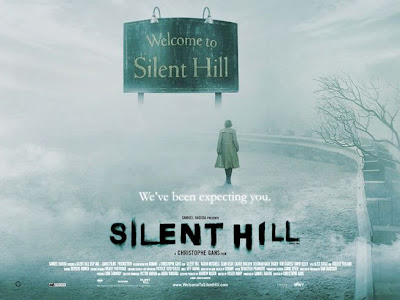 Regular readers will know that I have a penchant for horror, and try and keep up with as much as I can.

I'm not a great fan of the current batch of 'torture porn' as I've seen it imaginatively described - where pretty young boys and girls end up trapped and being tortured for no apparent reason. I've not yet seen Saw, which is where this all seemed to start, but I'm told that Saw at least has a decent plot and premise behind it. And follow that with Hostel, sequels to both Saw and Hostel, and several other riffs on the same theme, and it all seems a little stale. I know, not having seen the films, I'm not qualified to comment, and yet there's nothing in what I have seen about them which makes me want to see them in the first place.

However, what I really wanted to talk about was a film I picked up on DVD lately called Silent Hill. I'd seen some pics and features about it when it came out, and it intrigued me, but to be honest there wasn't much of a buzz about it, and I don't recall anyone reviewing it who was blown away.

Well, I loved it! It's the same with several films that really get to me - I love them but I can't put my finger on why, apart from that they are imaginative, well shot, have some great monsters, and just draw you in.

Silent Hill managed all these for me. It's based on a computer game apparently, but I've not played that, and follows the adventures of a woman called Rose who is trying to find her lost daughter in a ghost town called Silent Hill. The mist-shrouded town seems cut off from the outside world, and ash falls constantly from the sky. Every so often, a siren sounds and darkness falls, and then, in the darkness, monsters emerge to hunt, and the whole place rots and putrifies before your eyes.

There are some great CGI effects in here, the town literally rotting away before your eyes. Then there's the monsters. Mind boggling visions of red hot baby-like creatures mewling and shuffling in chase, an armless man-like creature which spews red hot acid-like material from a hole in it's chest, and a huge, hulking muscular man in a giant triangular steel mask who can literally rip your skin from your body! Some of these are enhanced by CGI, but by and large the creatures are real, created by actors, prosthetics and make-up and this is in itsself very refreshing.

I don't want to say too much as the film is expert at drawing you in and along, and the explanations come right at the end. It is a little clunky that they are all told/explained in more or less a single sequence, but I found myself nodding and smiling as I figured out how it all fitted together. The denoument is well crafted and freakily original, and the film even has a thought provoking ending.

One of the best parts for me came when Rose has to pass down a corridor full of nightmare 'dark nurses' - faceless bandage-swathed woman in ripped and torn grey nurses outfits who home in on light and sound, and who are intent on stopping Rose. Their jerky, twitchy movements are awesome and reminded me of the horrific ballet dancers in the video for Christina Aguilera's 'Fighter' - the ones who approach moth-Christina with giant pins ...

I enjoyed the imagery and the originality of the designs - far better than something generic and way above using pure blood and guts to get an audience reaction. Overall one of the better films I've enjoyed lately

There's an official site: http://www.sonypictures.com/homevideo/silenthill/index.html so go and have a look at some of the visuals. However the site does give a lot away about the film, and I feel it's something perhaps best experienced with little advance information as to what happens.