I Bid You Welcome

When out looking for Christmas presents recently I stumbled across a Dracula triple bill DVD in Asda of all places. This is one of the previously released Universal Collection, but here is was £5 ... so I snapped it up. The collection contains the original Universal Dracula with Bela Lugosi, the 1931 Spanish version of the same film, then two other films: Dracula's Daughter and House of Dracula. I'd not seen the latter three at all, and so we were set for a few evenings entertainment. 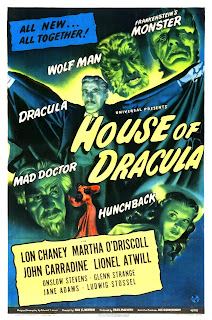 In reverse order, House of Dracula is a curious beast. Not quite a horror film but also not quite a comedy - that would come later when Abbot and Costello got in on the scene. But the set-up is distinctly farcical. Count Dracula visits a Professor to try and find a 'cure' for his vampirism, and the Professor and his beautiful hunchbacked nurse set about helping him. Then Larry Talbot arrives seeking a cure for his lycanthropy, and, when it's not forthcoming, jumps off the cliff into the sea ... the Professor goes down the cliff and they find a cave wherein lies the Frankenstein monster ... as well as some sort of fungal spores which will cure Talbot. Dracula is however trying to trick the professor and passes some of his blood into the human, so the Professor turns, Jekyll and Hyde-like into a human/vampire hybrid ... Honestly if you submitted this as a plot for a film or book then you'd be laughed out of the office ... It's all very hokey, but all played straight, and this helps matters. The cast are all pretty good and make the most of the ludicruous script, and the whole thing is entertaining in its own way. 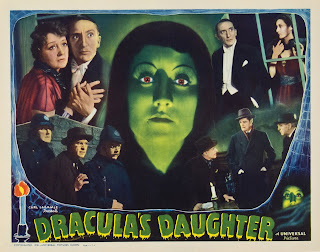 Dracula's Daughter is pretty dire though. Lacking the real thing, the plot is about Dracula's daughter and her attempt to ressurect her father ... it's slow and tedious and has comic characters inserted for no good reason. Not the best thing I've ever seen by a long shot. 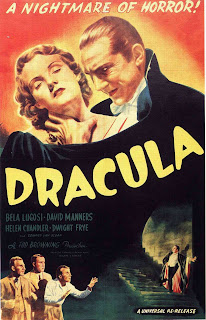 Then we come to the two Draculas. I'd always been told that the Spanish version was superior to the American one, but I beg to differ. The Lugosi version is far far better, with more atmosphere and character. That Lugosi was very comfortable in the role of the count is obvious, and he takes it all very seriously, wheras in the Spanish version, Carlos Villarias is something of a ham, playing it much like generations would spoof the character later on - all expressions and raised cloak. 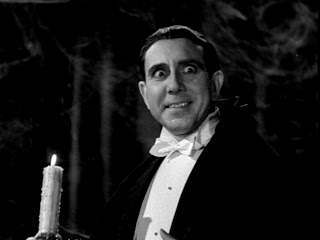 It is interesting to compare the two versions though as they both used the same script and were filmed on the same sets - but with different actors and directors, the end results are quite different. I preferred Dracula's appearance from his coffin in the Spanish version - wreathed in smoke and mist, but the general settings are better in the American one. I think that perhaps the cinematography just has the edge in the Spanish, but Tod Browning is a better director with more interesting ideas as to how it should all come together ... it's a fascinating exercise and I'm aware of only one other film which has two versions, both from the same script - though in this case filmed on entirely different sets. This is Psycho, where the 1960 Hitchcock version is reportedly vastly superior to the colour 1998 Gus van Sant version.
Posted by David at 12:03 pm No comments: 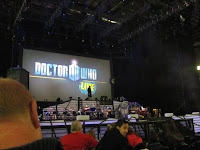 Interesting idea ... hire some stadium-sized venues and then put on a Doctor Who extravaganza with Monsters and everything ... Hmmm. When they announced Doctor Who Live, I, probably like everyone else, was quite excited. Sounded like fun and something different. I'd seen the play The Ultimate Adventure which was OK - a fun little diversion - but this promised to be bigger and better. So we got tickets to the Manchester News Arena, and the day arrived. When we got there, the place was packed with people all buying merchandise from the stalls around the outside corridor. It's always a little sad that these events seem to thrive more on how much money they can extract from your wallets than on word of mouth. So lots of stuff was being bought. Aside from the items produced specifically for the event (a glossy brochure, T Shirts, Mugs and the like) they were also hawking old Top Trumps card sets and other things which presumably had been sitting in boxes somewhere unsold and unloved. 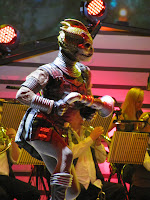 We had good seats - in Section C right down the front. So we settled down to see what might happen. The first slight surprise was that the place was not full. There were lots of empty seats around, but there was enough of a crowd for it to feel full of anticipation. There were lots of kids in Fezs and in David Tennant-like suits. I love seeing that :) When Doctor Who transcends fandom and everyone is dressing up. And so the show started. Live music from the band was excellent, and Nigel Planer comes on stage as Vorgenson, a showman who has a captured selection of monsters in his Mini-scope-like device. Yes, it's a riff on the old Pertwee story 'Carnival of Monsters'. Nice idea, but it got tired very quickly. 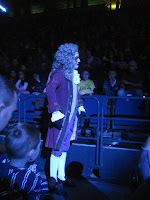 Planer would talk a bit, then announce a monster, they appeared at the back of the auditorium and stomped around a bit, before going on stage and back into the machine. We saw some Silurians, Ood, Judoon, Scarecrows, Clockwork Robots, Vampire girls, Cybermen ... and all did pretty much the same thing. There was a faintly amusing bit of business where a stooge in the crowd is taking pictures and the Cybermen take him on stage and 'convert' him ... but anyone not in the immediate area would have had trouble seeing what was going on. All this monster stomping activity was interspersed with some clips from the show set to music ... hmmm ... if I'd wanted to watch some clips on video, then I could do that at home without spending £45 to sit in an Arena. The first half came to a close, and we stretched our legs and watched people buying ice creams for inflated prices. Then it was part two ... More of the same. A lengthy video thing about Amy Pond, the Doctor on a video screen ... I thought this was Doctor Who Live! But the Doctor wasn't there! What a disappointment. I held out hope to the end that Matt Smith might bound from the TARDIS in the flesh, but no. He remained a distant video image throughout. The only live aspect was the music, and the two actors who spoke - Nigel Planer and Nick Briggs as Churchill. Briggs was wonderful. A brilliant performance. He was obviously having a great time. But Planer seemed out of sorts - going through the motions. In the second half, some of the audience cottoned on that this should be a little like a Panto and so booed and hissed Planer when he appeared. But this was too little too late. The script was pretty dire, and where it should have been obvious that this was a Panto with audience participation required, the script did not allow for that interaction to happen. Even a somewhat forced element of the Doctor wanting the audience to shout something out when he called ... it was all practiced, but then never happened ... disappointing. There was a sequence with the Weeping Angels which was pretty neat - soldiers coming in from the back to investigate and then all being whisked away by the Angels. Nicely done on stage with lighting effects hiding the transformations and vanishings. 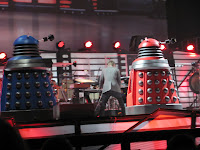 The climax of course featured the Daleks - the large, chunky wheely-bin-like Tellytubby Daleks, and they looked pretty good on stage, trundling about barking orders. The Doctor saves the day from his video hideout, and a White Dalek floated around on a pretty well hidden crane arm. Then it was all over. Ultimately, Doctor Who Live did not live up to the hype. It had a basic script, pared down to the minimum to make it as cheap as possible to stage. Two speaking cast members, and a crew of maybe 8 or 10 others who played all the monsters. There was too much video footage and music - this was not billed as a Proms event, so why try and highlight that? - and not enough innovation and variance in the script in terms of how the Monsters were used. Nigel Planer seemed to walk through the whole thing and lacked any real conviction as a villain, and overall the fact that the Doctor was not live and in person at an event billed as 'Doctor Who Live' was really inexcusable. We enjoyed it, don't get me wrong, but at £45 a ticket, we expected perhaps a little more than just an extended, animated exhibition of monsters, accompanied by music and big-screen videos. 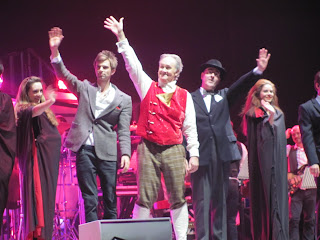