Our three films this week consist of the usual diverse mix ...  so here we go. 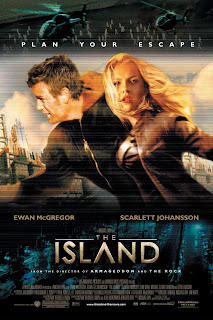 First up is a recent film called The Island. I'd somehow missed this up until now, but Sam had remembered it mainly because it totally rips off a novel called Spares, written by a friend of ours called Michael Marshall Smith. Here's what Wikipedia has to say about that: 'Michael Marshall Smith's 1996 novel Spares, in which the hero liberates intelligent clones from a "spare farm", whose clients are told they are not conscious, was optioned by DreamWorks in the late 1990s but never made. It remains unclear if the story inspired The Island, and so Marshall Smith did not consider it worthwhile to pursue legal action over the similarities. Paramount (once sister studio to DreamWorks after its parent Viacom purchased DreamWorks in late 2005, then spinning it off again in 2008) was in talks to option the novel after DreamWorks' rights expired, but declined after The Island was released. Marshall Smith considers it unlikely a Spares film will ever be made.'

It's actually not a bad movie and comes over as a sort of descendent of Logan's Run, where a couple (Ewan McGregor and Scarlett Johansson), apparently living in some futuristic world where everyone is fit and perfect, find out the truth about their 'world'. There's a sort of lottery running, where the winners get to go to 'The Island' - a paradise place where only the select few live - Earth being contaminated and dying above ground.

Of course, it's nothing of the sort, and in fact all these people are paid-for clones of people in the 'real' world topside who are called upon for spare parts when their doubles need them. Going to 'The Island' means that they are basically killed for their body parts.

The film looks good and has had a lot of time spent on the sets and effects. It's an entertaining watch, and so is such a shame that it's all tainted by allegedly being based on someone else's novel. 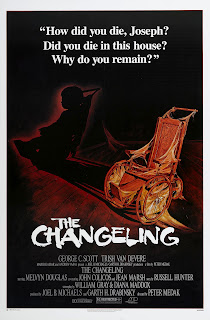 Next up is The Changeling. Not the recent film of that title, but a brilliant little ghost story from 1979 starring George C Scott. I saw this at the cinema many, many years ago and I remember it scaring the bejeezus out of me. This may even have been the last film to actually scare me!  And it really is that good.

Scott plays a composer, John Russell, who, after the death of his wife and daughter in a car accident, comes to stay in an old mansion ... which of course seems to be haunted by the restless ghost of something.

Events come to a head, and Russell starts to investigate further, delving into the past of the house, and finding out just what might be haunting it.

It's a brilliant tale and well told. The scares are not so much the jump out of your seat kind, but a slow, slow build, which end in you feeling so nervy that a ball slowly bouncing down a flight of stairs is enough to send you running for the light switch!

There's some classic moments too with a children's wheelchair which have been re-used and echoed through the years in films as diverse as Boo and Session 9.

If you've not seen it, then I heartily recommend The Changeling. 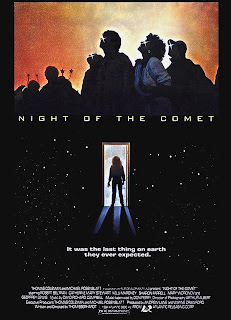 Finally, a zombie flick called Night of the Comet. I'm really not sure about this at all, as I don't think it is a zombie flick.  There are some zombies in it, but you seldom see them (when you do, the make-up is terrific though) and it's mostly about a couple of dumb American teens (Catherine Mary Stewart and Kelli Maroney) who manage to survive the destruction of all life on Earth, and who end up joining forces with a DJ (Robert Beltran) to try and survive.

It's trying to be Last Man on Earth, The Breakfast Club and Night of the Living Dead all at the same time, and it doesn't do any of them very well. It's also trying to be funny, and fails at that too ... I dunno ... I'm probably not the target audience for it anyway. I know many of my horror afficionado friends like it, and Sam quite enjoyed it ... but for me it failed to really make any impression (apart from the fleeting zombie makeups).  It's managed to gain a bit of a cult following, and so like many cult films, perhaps it's this trashyness which appeals.  Not for me though.