Review: The Evil of the Daleks Animation 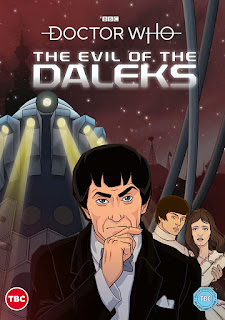 Long before we had telesnaps ... before audios ... before the novelisation ... before we really knew that much about the story, I loved The Evil of the Daleks. The main reason being that I'm one of the lucky ones who actually remembers watching it on its first transmission ... I was also watching Doctor Who when it was repeated, but strangely I have no memory of that second showing ...
The Evil of the Daleks was only the second time that Doctor Who had been repeated, and the first time that a whole story had been repeated (the first time, fact fans, was the very first episode, which was repeated the following week before the second episode aired, because power cuts had blacked out screens over much of the north of England the previous week - nothing to do with the assassination of JFK as is often claimed). But what a story to enjoy a second showing.
There is much history around the story: it was intended as a final swan-song for the Daleks as creator Terry Nation was trying to sell a Daleks-only series to America at the time (it didn't happen), it was written by David Whitaker, the show's first story editor, and the man who penned much of the Dalek spin-off fiction in the sixties, a new companion was introduced in the form of Victoria Waterfield ... lots happening. 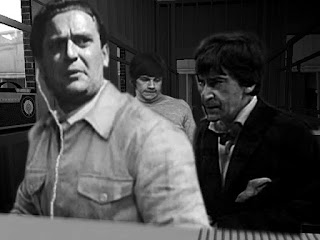 The structure of the story is also superb. It's seven episodes long, so lots of room for characters and situations to grow and to breathe. The first two episodes are set in the 'present day', kicking off at Gatwick Airport at the conclusion of The Faceless Ones with the TARDIS being stolen by Edward Waterfield (John Bailey). From there we head back to 1866 and a country house owned by Theodore Maxtible (Marius Goring) wherein he has been experimenting with turning base metal into gold, and has inadvertently summoned the Daleks through a static electricity-charged mirror-lined cabinet. The Daleks have their own agenda though and have kidnapped the Doctor (Patrick Troughton) and Jamie (Frazer Hines) in order that they might help the Daleks discover what 'the Human Factor' is. Jamie is to be tested, and all the elements which go to make him human are recorded by the Doctor. This leads to a cracking and action packed set of episodes featuring Jamie and his new friend, the mute servant Kemel (Sonny Caldinez), as they try to find and rescue Victoria (Deborah Watling) from the clutches of the Daleks. 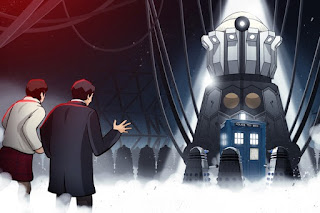 From here we then all head to the Dalek's home planet of Skaro, where the Doctor finally meets the Dalek Emperor (voiced brilliantly by Peter Hawkins) and discovers that he has been duped - the Daleks only wanted the Human Factor so that they could distil its opposite - the Dalek Factor - the impulse to kill and destroy.  They want to spread the Dalek Factor over the Earth, and intend to use the Doctor to do that.  The Daleks have developed an archway which will impregnate the Dalek Factor into any creature which passes under it, and thus Maxtible is turned into a human Dalek!  The Doctor, as always, is one step ahead, and replaces the Dalek Factor in the arch with the Human factor. He then pretends to be controlled and arranges for all the Daleks to go under the arch, creating a rebel faction of Daleks which have the Human Factor within them ... and of course civil war erupts on Skaro and the Daleks, and their Emperor are all destroyed. 'The Final End' he whispers from a rocky ledge overlooking the devastated Dalek city ... and perhaps, at the time, it was. 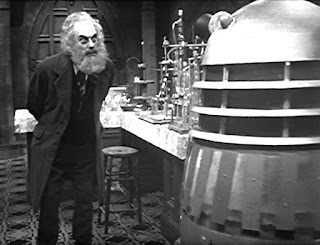 Now, I'm not the world's greatest fan of the new animated episodes of Doctor Who. I find them hard to watch as those involved tend to take it upon themselves to change too much. When we have the audios, telesnaps and even existing episodes, as well as camera scripts, photographs, and the memories of those who made the original shows, there's really no excuse for this divergence from the intended look and feel of the episodes. However scenes are repositioned, backgrounds made bigger and grander, plot elements are changed around, scenes are cut completely, and even the audio soundtrack is changed to match the alterations made to the visuals ... all this is done, it is claimed, to reimagine the episodes for a modern audience ... and yet the BBC markets them purely as an animation of a missing story ... neglecting to mention all the changes, tweaks and editorial differences that have been applied. For me, I wish they'd leave the soundtrack alone, and animate to try and replicate the original product, and not to try and get all creative and to make something totally different. 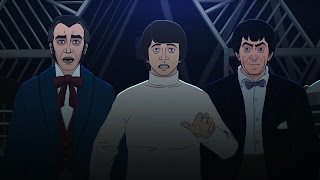 All that said, The Evil of the Daleks actually works magnificently as an animation. I watched the colour version - I thought why not - they're not trying to replicate the original, so why not watch the colour presentation... The main reason it works so well is that the story and the soundtrack is so good. The actors' performances leap from the screen, and the animation - which is more akin to The Faceless Ones or The Power of the Daleks rather than the frankly abysmal animated episode of The Web of Fear - supports it and brings the scenes to life. The settings are well done, reflecting the original sets nicely, and generally speaking the characters look like their televisual counterparts. 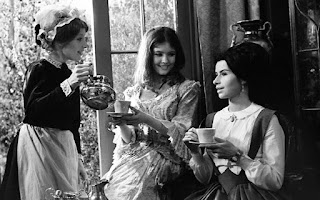 I feel that the characters who appear earlier in the story come over better - Maxtible, Waterfield, the Doctor, Jamie, Kennedy (Griffith Davies) and Perry (Geoffrey Colville) ... possibly because episode two of the adventure does still exist and so we can see how they moved and dressed. The weakest is possibly Victoria - she doesn't look much like Debbie Watling unfortunately. However the character of Arthur Terrall (Gary Watson) is also weak - again possibly because there's limited photographs and no visuals of his movements. I also suspect that Terrall was included in the original scripts just to pad them out in the middle section. He seems to play no significant role in the plot, and the idea that he is full of electricity and magnetism is introduced and then forgotten - is he some sort of Dalek-controlled robot? No, as he seems human and has a Dalek control device on the back of his head ... but then why is he magnetised? It's an interesting idea which is never developed in the original teleplay.
In the first two episodes, unfortunately the animation team decide to pepper the visuals with little easter eggs again - this is including in-jokes and Doctor Who elements into the scenes which were not there on the original. This time I spotted the following: 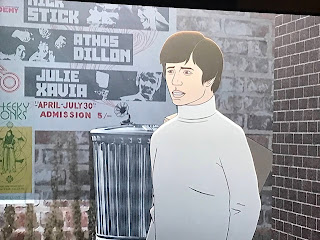 - 'Hickmans' written on the cans of oil and anti-freeze in the warehouse (referencing fan Clayton Hickman). This is a carry-over from The Faceless Ones animation where the same thing appeared
- The posters outside the garage. Here we have 'Birdcage WHO' - I'm not sure what this is, but we see that John Smith and the Common Men is appearing in concert (mentioned in the first ever episode of Who), there's a Chameleon Tours poster (from The Faceless Ones), Izzy Sound might be a reference to Izzy, the eighth Doctor's companion from Doctor Who Magazine's comic strip, but then we also have 'Julia Xavia' with a photograph of the Drahvin Maaga (Stephanie Bidmead) from the Galaxy Four Doctor Who story. There are some other photos too here, but nothing I could recognise. Perhaps 'Dillon' is referring to Steve Dillon, one of the Doctor Who Magazine artists? No idea.
The music played in the Tricolour Bar has been changed - we should have had The Beatles with 'Paperback Writer' ... at least its removal and replacement is pretty seamless, so well done on the audio front. There were rights issues when the soundtrack for The Evil of the Daleks was first released and the track was replaced there with 'Hold Tight', by Dave Dee, Dozy, Beaky, Mick and Tich. On the animation release this track remains. Maybe the rights issues persist ...

Another random thing I spotted was that the clock in Waterfield's office always showed 4pm ... and other minor gripes are the Daleks' countdown clock for the detonation of Maxtible's house having the Dalek measure of time - rels - on it, and the window that Kemel falls out of during the fight with Jamie now becoming a door (a door to an outside sloping rooftop - very odd). 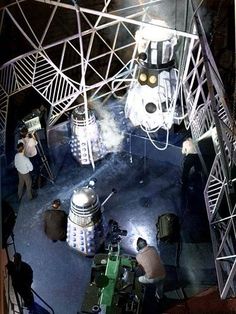 When we get to Skaro at the end of the story, the animation really steps up a notch. There's little in the way of visuals for these episodes - there are some lovely telesnaps (https://www.bbc.co.uk/doctorwho/classic/photonovels/evilofthedaleks/) - but the animation of the Dalek city, the corridors, and the encounter with the Emperor Dalek are all really well done. The Daleks too are nicely animated and move well ... I liked the various smoke effects and the way it was all integrated together. The final battle in episode seven is also well done, and while the TV version had to make do with toy Daleks and miniature explosions in the longshots, here we have proper Daleks, and it all looks the better for it - good example where deviating from what was on television works, as you can improve on what was originally intended, rather than just changing it for change sake.
I do have one further strong memory from watching the show, but unfortunately it's not one which is ratified by any of the telesnaps or other surviving material. It had an impact on me as a child though ... When Maxtible, and then the Doctor, pass under the conversion arch and are changed into human Daleks, my memory is that one of their hands was pressed to their forehead, while the other was outstretched like a Dalek plunger arm - thus they were physically pretending to be Daleks as well as speaking like them ... This is of course how we all 'played' Daleks in the school playground, and so it's possible that this element was picked up on and incorporated by the production team into the narrative ... or it could be my totally misremembering it.  What I do recall however, is even aged around 5, that it was a little silly to see on screen - that feeling is part of the memory and may be why I recall it. There's a point on the soundtrack when the Doctor or Maxtible turn around having been converted, and the watching friends express horror that they are now a Dalek - in my memory they knew this because the hand went up to the forehead and the other arm outstretched ...  And the reason for my explaining all this is that in the animation this doesn't happen. 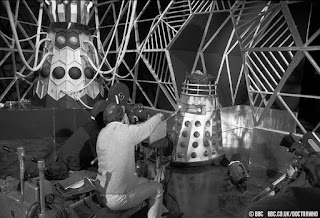 Overall, this release really brings The Evil of the Daleks back to life. There's a black and white version of the animation on the disks, and the colour. There's also a version which uses the telesnaps in case you fancy watching that, as well as the usual making-of documentaries and photo galleries. The existing episode two is also here to enjoy.  All in all it's a great package, and truly cements in my mind that The Evil of the Daleks is indeed one of the best Doctor Who adventures ever made, and that if it still existed, we would be celebrating it along with other classics like Pyramids of Mars, The Talons of Weng-Chiang and The Caves of Androzani ... all times when Doctor Who really pushed the boat out as far as scripting and performance and visual impact ... and all reasons why we still talk about, and enjoy those adventures today.
Posted by David at 9:04 am No comments: