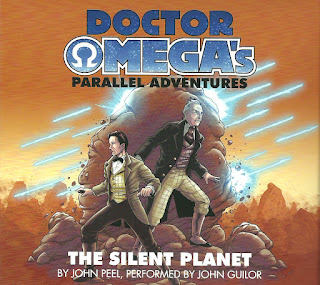 Doctor Omega is a strange beast indeed. We've all heard of Doctor Who of course, and probably most people know that it started in 1963, having been created by a committee at the BBC ...

But in 2003, American-based French writer and researcher Jean-Marc L'Officier, 'discovered' a French science fiction novel from 1906 by Arnould Galopin called Docteur Omega. A 1940s reprint of the French book contained illustrations which showed the eponymous Doctor as bearing great resemblance to William Hartnell's portrayal of Doctor Who, and so L'Officier decided to translate the French Docteur Omega to create a novel which contained a great many references and allusions to Doctor Who (I've not read it, but reportedly it includes sonic screwdriver, time travel and a grand daughter). Really playing up the possibility that the one could have inspired the other (it didn't, it's all just coincidence).

This Doctor Who-ised translation was published in 2003 (available here): http://www.blackcoatpress.com/fiction-doctor-omega.html) and given a very Target book-esque cover, and heavily promoted off the back of the imaginary Doctor Who connection.

The book was followed by a newly written sequel consisting of many short stories: Doctor Omega and the Shadowmen (Available here: http://www.blackcoatpress.com/fiction-doctor-omega-and-the-shadowmen.html)

The original novel was then translated again in 2013, without adding in all the gratuitous Doctor Who references, and this is available here: http://www.lulu.com/gb/en/shop/arnould-galopin/doctor-omega/paperback/product-21150648.html

There's also an audio of this later translation, read by John Guilor. Copies are available here (at time of writing): https://www.amazon.co.uk/Doctor-Omega-Fantastic-Adventure-Mars/dp/B00M5AJBP8/ref=sr_1_sc_1?ie=UTF8&qid=1484126882&sr=8-1-spell&keywords=doctor%20omega%20advernture%20mars

To confuse things further, John Guilor was hired by the BBC to impersonate William Hartnell's voice for 2013's 'The Day of the Doctor' Doctor Who story on television, but for the reading of the original novel, he chose not to do it in Hartnell-ese.  As he explained: 'I felt that he should only sound vaguely familiar and I also thought that people would listen to how well I was impersonating Hartnell (or not) rather than the story - and the story's great!'

Now we come to 2016, and Doctor Omega gets another life in the 'Parallel Adventures'.  I'm not quite sure what they are meant to be parallel to ... maybe Doctor Who? Or maybe it's that the 'Tuner' (which I keep disconcertingly hearing as 'Tuna') that the Doctor travels in, moves across dimensions and space in a parallel fashion ...

The first CD, The Silent Planet (perhaps after C S Lewis' Out of the Silent Planet (1938)) has been written by John Peel, a prolific and successful writer and novelist, and he has based this very much on the original text by Galopin, so there are no blatant Doctor Who-isms on show. To completely befuddle everyone though, John Guilor is back narrating it, but this time he is performing Doctor Omega as though he were played by William Hartnell playing Doctor Who.

Thus we have a curious CD, which runs for a little over 21 minutes, which sounds like a Doctor Who missing adventure if the TARDIS was called a Tuner ... And it's not at all bad. The plot is slight, but then there's only 21 minutes to play with, and it has elements of War of the Worlds about it, as well as some gadgetry and other things pertinent to the contemporary writings of Wells and Verne and so on ...

The packaging is really nice. A gatefold card cover containing the CD and a little black and white mini-comic called Galapagos Planet by Steve Andrew. Indeed the CD is raising money to help save and preserve the Galapagos Tortoise population ...

So on the surface this has nothing whatsoever to do with actual Doctor Who, and yet can be listened to as a First Doctor adventure, or as something completely different ...

Copies of the new CD will be available in the UK from Who Dares Ltd at some point soon (http://www.who-dares.co.uk/)