Been watching quite a few films lately ... so here's a quick rundown: 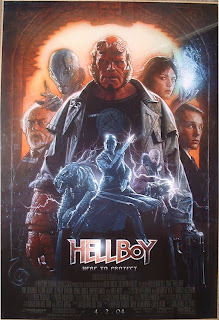 HELLBOY - watched this again in preparation to seeing the new one. I like the way it mixes up the physical, prosthetic effects with CGI giving an overall impression of realism which can so often be lost with CGI-only effects. I remembered enjoying this the first time, and a second viewing doesn't disappoint. 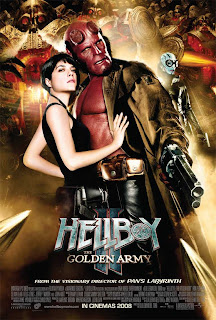 HELLBOY 2 - went to the pics to see this one ... and it's well on a par with the first. What is interesting is that the first film is complete in and of itself, and so this second film, although it is a continuation of the story, doesn't really link to the first. There is a quick recap at the start of Hellboy's origins, and a fairly pointless scene of him as a kid - ramming home what the eventual denoument to the whole film will be - but otherwise it's another great romp. I thought Luke Goss eas magnificent as the Elven prince, and the princess was also very nicely played. The mix of physical vs CGI is used to good effect again, and the whole thing rattles along in very enjoyable style. There are touches of Del Toro's design preferences coming through in the Elven Chamberlain and the strange Eagle/witch/woman, and his imagination still soars through the visuals and mix of fantasy and science fiction. The main part that annoyed me was the attack by the tooth fairies at the start. There are millions of them, and they shoot at them! That's like trying to disable a swarm of bees or wasps by shooting at them ... it's simply never going to work. And yet they spend quite a bit of time plugging away at them before Mrs Hellboy does her 'flame on' act and saves the day (speaking of which, her flames are red in this film but blue in the first ...) 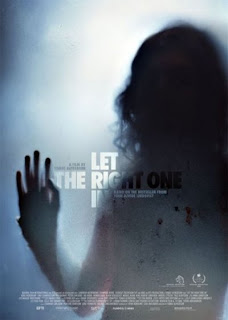 LET THE RIGHT ONE IN - This is a Swedish vampire film I saw at Frightfest. Before it started, the writer stood up on stage and said that anyone who didn't like it was evil ... well I must be a bit evil then. The film was OK ... but glacially slow. It really dragged which is a shame as there's a good plot there, good characters (though the two child leads struggled a little) and some nice set pieces. It's basically the coming of age story of an 11 year old boy who is bullied at school. He befriends a 12 year old girl next door who also happens to be a vampire, and she encourages him to fight back against the bullies. Meanwhile her helper, a man who could be her father, or brother, or just a friend, is killing the menfolk around the town to provide blood for Eli to drink until he is trapped and, in a strange moment, disfigures himself with acid before allowing Eli to kill him too. In this way, there is an undercurrent that Eli is just using the boy and he will grow, killing for her and hiding her just as her previous human did. Maybe I'm cynical, but it did throw another level onto the kids' relationship. Maybe with half an hour cut out (it's around 2 hours long) it might work, but even shorter the pace is so very very slow. There is a cracking final sequence in a swimming pool which had the audience applauding, but it was a long time to wait to get to it. Another friend said he loved the slow build-up and the pacing, so maybe it's me and the film is fine. I've been spoiled on a diet of fast-paced blockbuster movies! 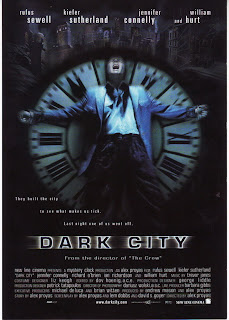 DARK CITY - I picked up the new director's cut of this and watched it ... great film! It's a long time since I saw the original, and so I couldn't tell what was new/different this time. However the film really hangs together well, and it all belies when it was made, the effects are smooth and integrated and the visual design of the film is boggling. Richard O'Brien is awesome as the somewhat obsessed Mr Hand, and the strange aliens led by Ian Richardson are a cross between the Hellraiser Cenobites and the Gentlemen out of Buffy. It's a film that makes you think and appreciate the performances and the love and care that went into it. All the cast are superb, and overall this has to be one of the best films for re-watching as I'm sure you'll see more and get more from it every time. David
Posted by David at 4:27 pm 1 comment: