Tarco, who produced a rather nice range of Vending Machine figures last year, have several more items now available, with more to come in 2015. 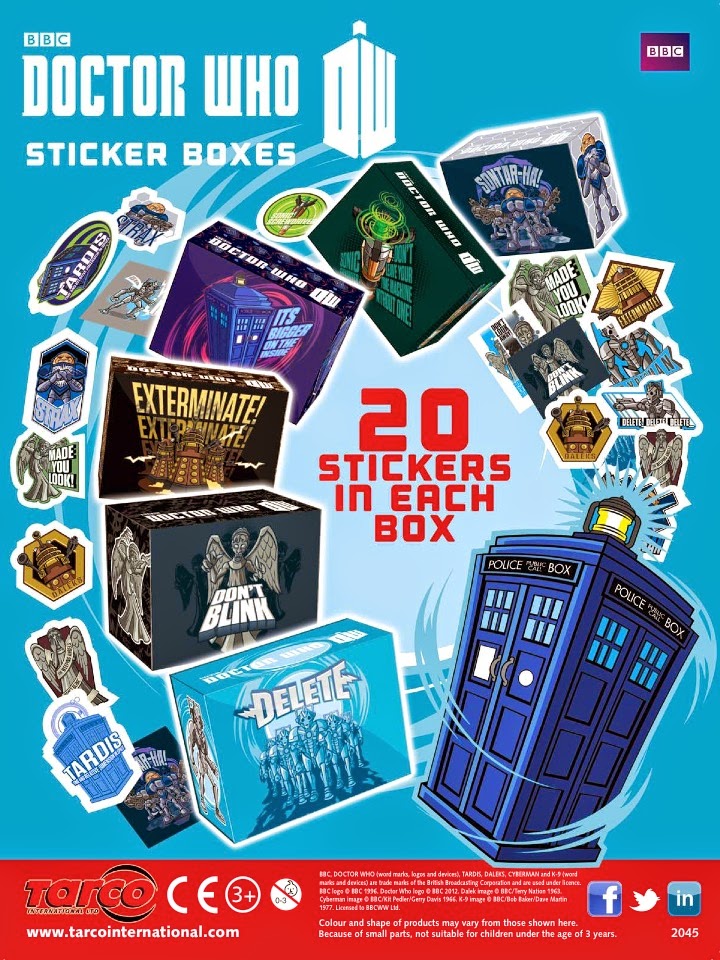 Each box is tiny (it has to be in order to fit in the vending machine ball) and around 4cmx3cmx2cm. Thus the little stickers inside are also tiny. Each box contains 5 each of 4 different designs, and despite the teeny size, they are all very nice indeed. 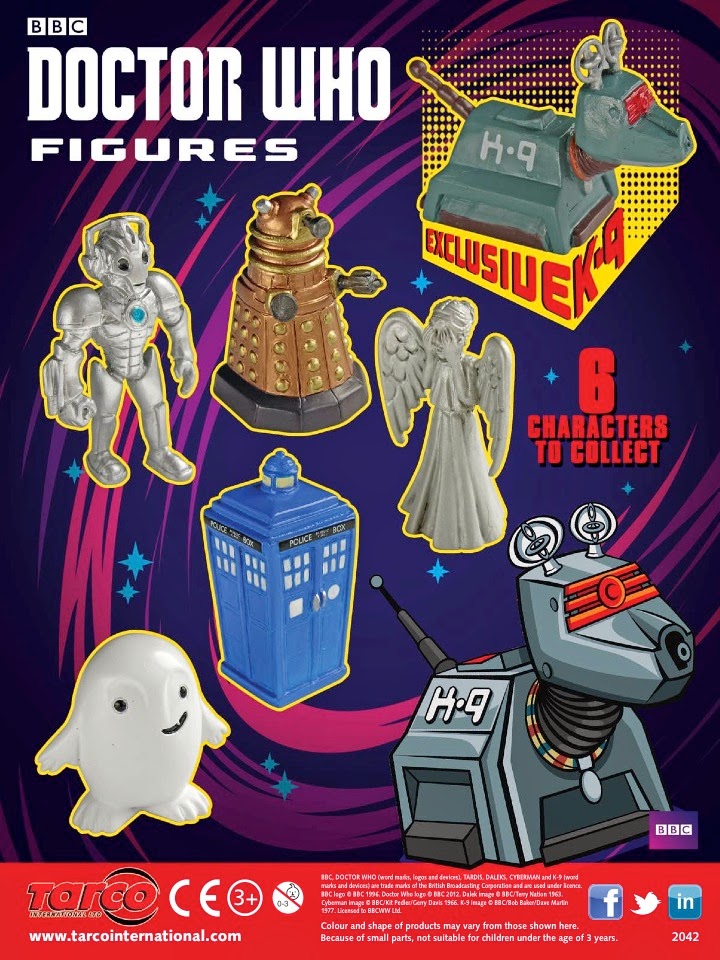 Just released is a second set of figures:

Unlike the first set of figures, which were based on the more stylised characters from the animated game, this second set are screen-designs and thus more accurate.

They are all very nicely modelled and painted - again each is only around 4cm high! The Cyberman is a little stylised, with a large chest and tiny waist, and the Adipose is of course just cute!  I like that the TARDIS is slightly smaller at the base, giving it a sort of stretched look - but this just makes it unique! 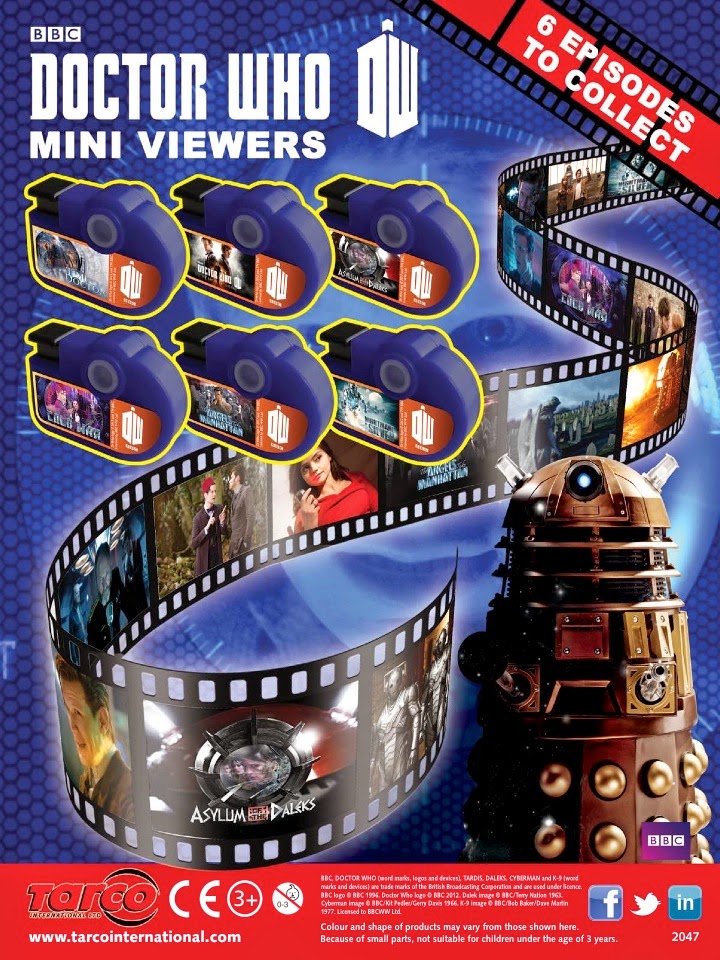 And coming late December/early January is a set of little mini-viewers, each containing 8 screenshots from the shows transmitted during 2013:
The Time of the Doctor
The Day of the Doctor
Nightmare in Silver
The Angels take Manhattan
Cold war
Asylum of the Daleks

These items are rather lovely. Each is a little tiny viewer - and those with long memories will remember the old Viewmaster sets of years past. Again the viewers are minute - around the 4cmx3cmx2cm mark, and have a small viewing hole through which can be seen the slides which are moved on by pressing a button on the top - its a mechanical action though - no batteries!

All the episodes chosen were part of the 50th anniversary year, and take in all the current staples of Daleks, Cybermen, Angels, Ice Warrior and of course the Doctor.

For just £1 each, these are rather lovely, and a nice way to remember the episodes in question. 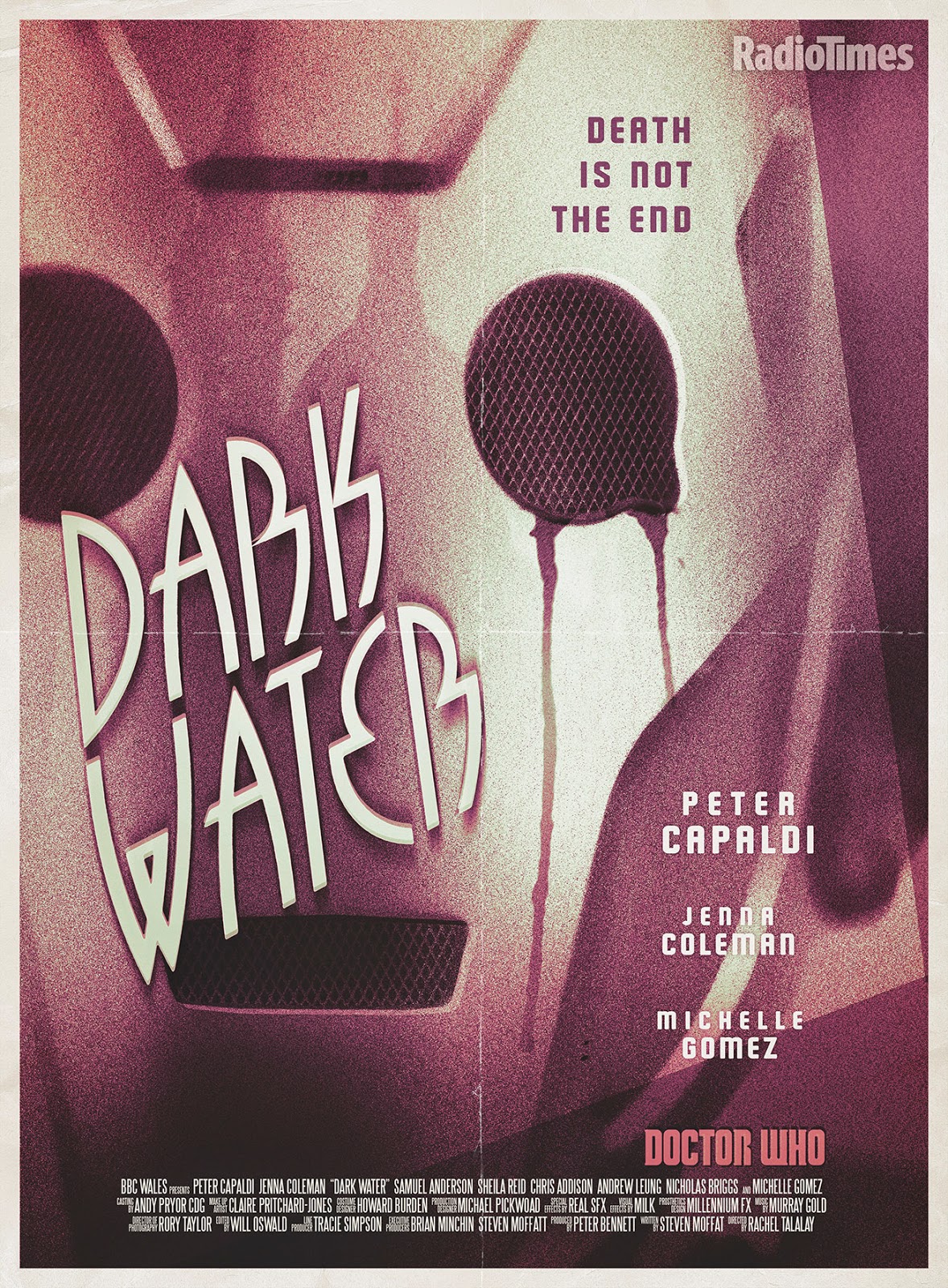 Finally succumbed and got round to watching the two-episode WHO finale last night ... and it wasn't as bad as I feared. In fact, I quite enjoyed it. The plot made sense (of a sort) and the elements which were a little 'mad' were no 'madder' than things that the show has presented before - at least pretty much everything was explained (sort of - there are some niggles from earlier in the season which were not resolved). I liked the female Master idea, and was pleased that she wasn't as bat-shit-crazy as John Simm played him - and as the Master doesn't have a 'real' body any more anyway (after the TVM when he was a plasma snake which could take over other people's bodies - an extension of what we saw at the end of KEEPER OF TRAKEN) then there's no reason why he couldn't have a female persona. I like the 'Dark Water' idea and the Cyber-reveal (even if it was only there for that purpose), but the idea of the Cyber-nanites reanimated all the dead was a little silly - surely after a time, the bodies would have decayed to the point that there's nothing left but bone, and that's not really of much use to create a Cyberman. Likewise the Dark Water only revealing skeletons would have been better if there had been other organic tissue revealed as well - there's more in those suits than just bone (as we saw when Danny-Cyberman was revealed at the end. Their voices had changed again (as per tradition I suppose) and were more like the Judoon now ... still not a patch on the sixties ones. I thought the Brigadier bit was silly mainly because there was no explanation as to why, of all the millions of Cybermen, it's only Danny and the Brigadier who can still think independently ... and if it was *all* of them could do this, then I suspect the Cyber-invasion would never work in the first place. Unless of course that the Master's mad plan is basically fatally flawed in this regard ... in which case they should have explained that. 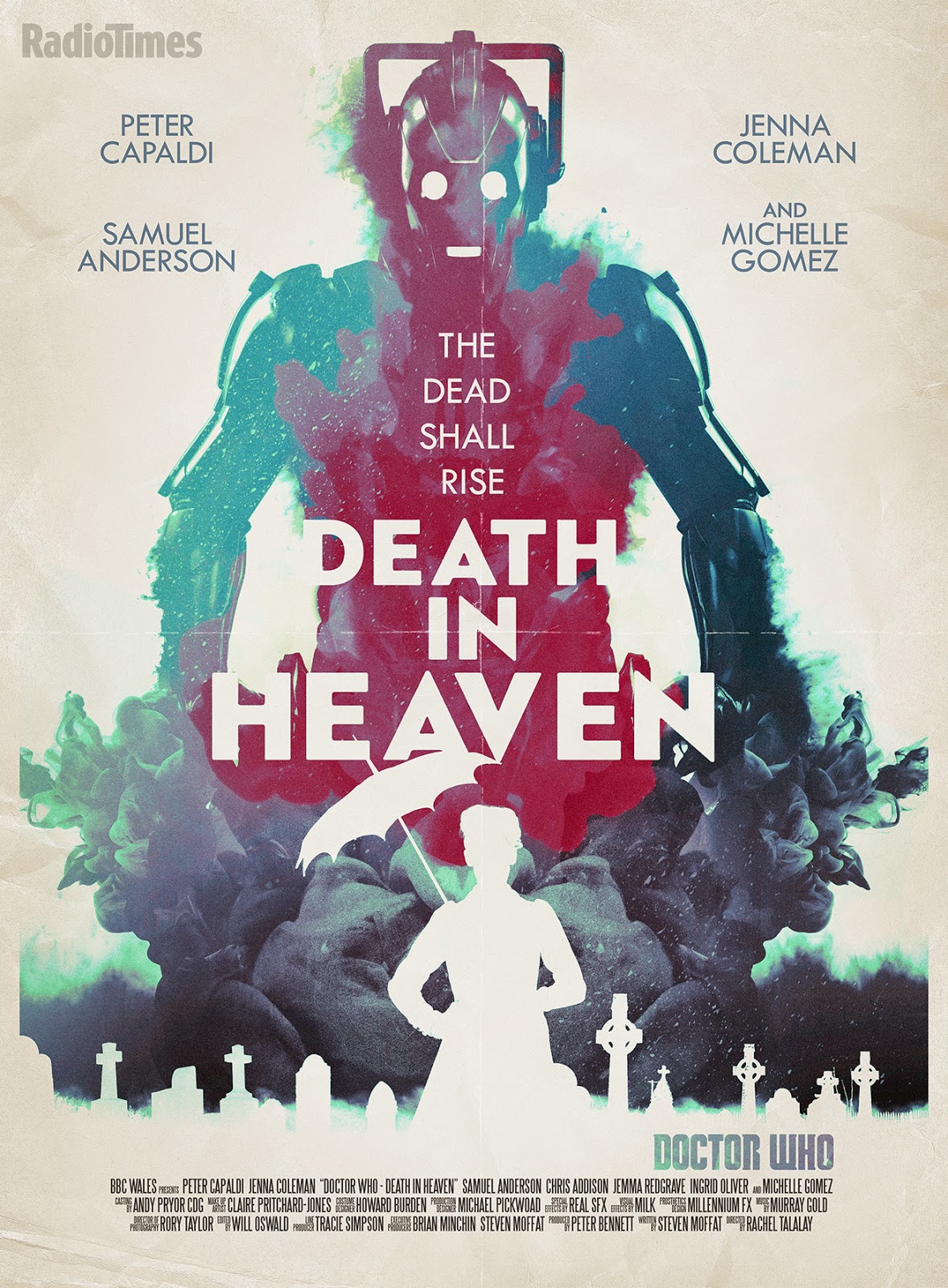 What the conclusion didn't do, was to explain any of the plot holes and flaws of the earlier episodes. which rather suggests that they were plot holes and flaws rather than being part of some master plan ... So overall, for me, this is certainly the weakest season of WHO ever transmitted. While Capaldi as the Doctor was brilliant, he was sidelined by the scripts and not allowed to shine. The plots were far more in fantasyland than ever before (and with no reason for this, they stand out like a sore thumb) and lacked decent conclusions and feasible (or even any) explanations throughout. The whole Clara/Danny subplot kept bubbling to the fore when it should have remained a subplot, and genuine excitement was replaced by angst and talky schmaltz ...

I can see that I need to steel myself and re-watch the season (including the episodes I've not yet seen) so I can pen a proper review of it ... noting the elements which didn't work for me and trying to explain why that is ...