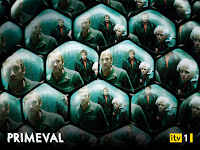 I suspect that like myself, many people tuned in to watch ITV's answer to the good Doctor ... a sci-fi thriller series called Primeval. The concept is OK I suppose, there are rifts in time which open up apparently randomly and let all manner of creatures from Earth's distant past come through: like lizards, dinosaurs, giant crocodile things and Dodos. On hand to try and clear up the mess that this causes is a small group lead by a bloke called Cutter who is pining for his lost wife who vanished through one of these portals years ago.

Also in the team is a lizard expert called Abby (played by the unbearably cute Hannah Spearrit - the other blonde one from S-Club 7), a dorky bloke whose name I forget who fancies Abby, and an older cute guy that Abby fancies - is he called Stephen? Add to this some love interest for Cutter in the form of a woman who works for a time-rift-investigating government department led by a mis-cast man whose collars are too starched and too big.

Oh, and all the monsters are created by the same CGI team used on Walking with Dinosaurs and sequels.

Hmmm ... no, it's not a patch on Doctor Who. The idea is sound, but in only 6 episodes, they have already, by the end of episode four, 'rescued' Cutter's wife from prehistoric times, had her guff on about nothing and then escape again (and is it just me or is she a dead ringer for Sidney Bristow's mother in Alias?) and short circuited most of the background suspense in favour of a 'monster of the week' approach. Not that there's anything wrong with 'monster of the week'. I like monsters ... but there needs to be something of a plot to hang it all on.

At the moment, the last episode - the one with the Dodos - was by far the worst of the lot. From comedy Dodos to horrific internal parasites in two scenes. From Abby in her pants (which was the highlight - that's two weeks running now we've enjoyed Abby wandering around in her pants for no good reason) to dorky-boy's dorky pals kidnapping a Dodo and getting themselves infected into the bargain. And then a mawkish ending ... it's just not cutting the mustard.

But it's inoffensive for the most part, and watchable if you disengage your brain and skim over the inconsistencies and plot holes. The worst part though has to be the CGI. It's so obvious and unreal that it leeches all the tension from the episodes. And why do all CGI monsters, from the annoying cute lizard to the giant centipede and the comedy Dodos have to be embued with human characteristics of cocking their heads cutely, chittering at you cutely, and then attacking you and continuing to attack even when you are behind a closed door and therefore out of sight, sound, and smell range. Are there *any* animals (apart from Man) which continue to hunt and attack even when the prey is out of reach? And do this to the extent of trying to batter a door down with their head! Owch ...

Oh well ... in about4 weeks the good Doctor is back and as usual I'll try and keep up with the weekly episode reviews here once more. Until then ...

As regular readers of this blog will know, end of last September I left my employers, LloydsTSB, under their voluntary redundancy scheme after 27 years of working there. Since then I've been searching and looking and applying for jobs, trying to find contract work in what I am trained and expert in - IT Change and Implementation Management. But to no avail. One of the things that is recommended for finding a new job is networking ... calling on friends to see if they have any suggestions, leads or opportunities at their own places of work ... and so, as I consider everyone here a friend :) Does anyone work in the IT sector? And if you do, might you have any need of an experienced manager of Change and Implementation activities? If so, then I'd dearly love to hear from you. Just drop me an email at david@howeswho.co.uk and we can talk. Then this somewhat stressful period of no-work can come to an end. Cheers
Posted by David at 1:46 pm 1 comment: