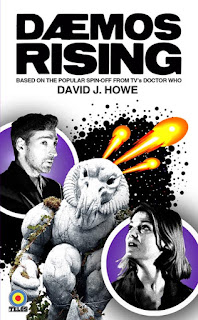 Way back in the dim and distant past I was a massive fan of the Target Doctor Who novelisations ... I joined the Target Book Club to get advance information about them, I was sent cover proofs and cherished them ... eventually I got advance copies which was wonderful ... and of course ultimately I wrote a book all about them called The Target Book. Never has a range of books been more influential and iconic.

One thing I always wanted to do was actually write one! However that opportunity was never to be. Even though I knew the final editors working on the ranges, and was even being published by them, and was acting as proof reader on several titles ... I was never asked to pen one. Again, back in the day, I wrote my own novelisation of Image of the Fendahl. I remember listening to the audio I had recorded over and over in order to get the dialogue just right ... I probably even have my text somewhere! I think I even sent it to Terrance Dicks - having no clue as to how things worked - to see if he thought it might be usable ... of course it wasn't going to stand a cat's chance in hell ... but I was young and keen.

So it gives me such immense pleasure to announce that I have finally written a novelisation ... and moreover it's a novelisation of something I wrote which was made into a proper film that you can buy on DVD from Amazon and watch and everything ...

Daemos Rising was as most things tend to be, a labour of love, and I am eternally grateful to Keith Barnfather for allowing me to play with the toys for that production. Of course it's not just Keith I have to thank, as Marc Platt created the characters of Kate Lethbridge-Stewart and Douglas Cavendish, and the Daemons on Doctor Who were created by Barry Letts and Robert Sloman, and the whole Time Hunter idea and concept was co-created with Stephen James Walker for Telos, and that spun off of a Doctor Who  Novella by Daniel O'Mahony called 'The Cabinet of Light', and then the final book in that series, 'Child of Time' was written by myself and George Mann ... so you can see what a fractured, complex and interesting these ideas have in their birth, gestation and eventual realisation.

For the novelisation, I have taken what we presented on screen in the film of Daemos Rising and enhanced it with additional material which, given the budget, could not be seen on screen at all ... There's the back story of the Ghost and his companion for a start, and the machinations of the Sodality in the future, as well as the real plans and intentions of the Daemons ... such a lot to cram into a novelisation.

But I think I've done it all justice, and the book works in the way I wanted it to.

It's such a thrill and a rush to take something written for the screen and to interpret it for prose ... lots of things change, motivations become clearer, and missing scenes and other helpful elements can be injected at the appropriate places.  I hope readers really enjoy it, and start to appreciate what we all collectively saw the story of the Daemons as being ... from their debut in a 1971 Doctor Who adventure, through Daemos Rising, through my story for the White Witch of Devil's End anthology series, and ultimately to the Time Hunter novel 'Child of Time' ... Hopefully people will seek these things out, watch/read them in order, and have as much fun as we did ...

KATE LETHBRIDGE-STEWART is summoned by an old friend, Douglas Cavendish, to help him with a problem he has with ghosts and voices in his head. But when Kate arrives, she finds more than she expected. Aided by a time-traveller from the future, Kate must outwit both the ancient race of Daemons, and the Sodality, a human cult-like organisation from the future, which is intent on gaining control over time.

Daemos Rising is based on, and expands upon, the Reeltime Pictures drama production Daemos Rising originally released in 2004 and available from www.timetraveltv.com. It also spins off from the 1971 BBC Doctor Who adventure ‘The Daemons’, and is a prequel to the Telos Publishing Time Hunter novella ‘Child of Time’. All characters used with permission. This book has not been licensed or approved by the BBC or any of its affiliates.

The special edition is an A-format paperback release, sized and designed to fit in with the Target Doctor Who novelisations. It features a retro-art cover by Andrew-Mark Thompson, and includes an 8 page full colour section of photographs from the making of Daemos Rising in 2004.


Daemos Rising is written by David J Howe, noted Doctor Who collector and historian who wrote the original script for the film.

'White Witch of Devil's End' is available from Amazon.
Or on physical media or to stream from https://timetraveltv.com/programme/431
'The Daemons of Devil's End' the novelisation is available to order here: https://telos.co.uk/shop/horror-dark-fantasy-and-science-fiction/telos-originals/the-daemons-of-devils-end-special/