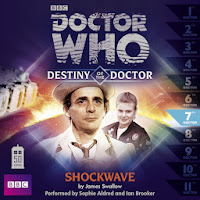 Continuing my run through of the DESTINY OF THE DOCTOR CDs, we come to those for the seventh, eighth and ninth Doctors ... and they are a mixed bag.

For Sylvester McCoy's seventh Doctor, we see him paired with Sophie Aldred's Ace for 'Shockwave' by James Swallow.  I have always enjoyed Jim's writing and this is no exception, being something of a straightforward tale of a spaceship fleeing a disaster which has engulfed their homeworld. But there is a traitor on board, and it doesn't take a rocket scientist to figure out who they are.  One problem I had here was that the rehabilitation of the traitor comes a little too easily I felt. But the story is well told and performed by Aldred and has a good sense of excitement about it. 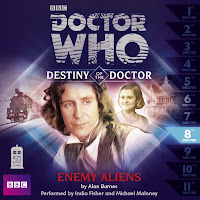 For Paul McGann's ninth Doctor, we have 'Enemy Aliens' by Alan Barnes which pairs him with India Fisher as Charlie - one of the Big Finish audio companions and one which I never felt really worked. She doesn't work here also, coming over as too proclamatory and world-knowledgeable for my liking. The story is a bit daft too, being based around a musical cue, attacking monsters, and a cross country trip by train where the Doctor conveniently turns up in a coffin, and where just about every incidental character turns out to be a spy of some sort. I didn't really enjoy it to be honest, just found it a little muddled. 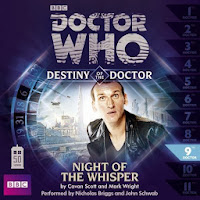 Finally we have 'Night of the Whisper' by Cavan Scott and Mark Wright, where we have Nicholas Briggs doing the narration chores, and, I must say, doing the most brilliant impression of Christopher Eccleston's ninth Doctor that I have ever heard! It is magnificent!  I loved the story here too, it seems to 'fit' the era nicely, and well done to Cavan and Mark for pulling it off.  The only issue I have is that John Schwab's American accent is very close to Briggs' own, and sometimes it's confusing who is speaking ...  but overall this is one of the better releases in the range.

There are two more to come ... and the final release got mixed up in AudioGo going into Administration ... luckily Big Finish managed to get hold of the stock and are selling the CD themselves ... so I have it ... need to listen to it ... and then I can pen my final comments on this 11 CD, year long adventure for the Doctor!

One of the things that we really loved when we bought the house in which we now live, was that the front room had two fires in original surrounds.  One - the main one - was an old gas affair, which we had replaced with a more modern gas fire which really looks like it has coals in it, and which serves to heat the room nicely. The other, however, was an open fire, set in a beautiful original Victorian setting, with marble and inlay and bags of character.

We checked the chimney out and had it swept, and then we didn't use it!

This winter, both the radiators in the front room decided to stop working, and the room was chilly!  So earlier in the week, rather than spend money on gas and electric radiators, I got hold of some kindling and paper, bought some smokeless coals and firelighters, and set about discovering the joys of a real fire!

I love it! Cleaning out the hearth with metal spade-thing and brush. Scrunching the newspaper into balls, scattering crumbled firelighter brick (which smells of chemical paraffin) over them, and placing a larger chunk of the stuff in the centre ... then apply a match to the central brick. The flames burst slowly into life and the paper crackles as it's consumed. Then I place the kindling in a small tower around and over it.

The flames lick higher and when the wood is burning, I then carefully collapse the tower with lumps of the coal, building a small pile with a core of hot, burning wood beneath it.  The fire crackles and smoke is drawn up and out the chimney. It smells like autumn and comfort. Like childhood and those long, perfect evenings spent tending bonfires in the garden with my dad.

Sam and I then curl up with a glass of something red, watching the firelight playing on the glasses, the room lit with candles and flickering shadows. It's wonderful and cosy, and the fire seems to heat the room far better than the gas fire does. Indeed, because the open chimney runs the height of the house, the fire heats the other rooms too - very clever those house designers of long ago.

Every so often I'll move the coals around, add more, making the little fire bigger and more effective ... it's a strangely satisfying thing tending a fire ... sort of restful and relaxing. I love how the coals glow and crackle, how the new fuel smokes and steams for a time while it dries out and then starts to burn gently. Moreover there's a wonderful sense of calm ... just what we need in these hectic times.

I've just finished the editing and publication work on a new book for Telos called Celtic Spells - a collection of 52 simple spells (one for every week of the year), chants and meditations which guide people to a more thoughtful and spiritual association with nature and the wonders of the world around us. The book is beautifully illustrated with photographs and so this newfound delight at the simplicity of a hearth fire is well timed.
Posted by David at 3:52 pm No comments: