I'm feeling well wierd today as I left my job. I started with LloydsTSB when it was just Lloyds Bank back in September 1979 - in IT as a programmer. I've been there ever since, progressing from programming to design, system test, team leading, project managing, business analysis and most other jobs in between. Ended up being an IT Implementation Management specialist working on many of the Bank's major implementations over the last 10 years or so. But earlier this year they offered VR and I applied and they accepted and so as of today I left! It's hard to describe what it's like clearing your desk, deleting old emails and files, packing stuff into a bag to take home, recording the final Out of Office message for the answerphone and emails ... after 27 years of it being my home ... I had a great send off party last night, and a lovely lunch with the people I work with currently. Left the office about 2pm today ... and sort of wandered London. ... I'm glad to have made the decision to leave. It was the right decision at the right time, and I have some great opportunities opening up for me. But I'm going to miss all my friends terribly - even though I'm determined to stay in touch with many of them - as it's the people who make work fun even when it's hard going and stressful. So I'm in a funny tired and drained mood, happy and yet incredibly sad.
Posted by David at 7:48 pm 6 comments: 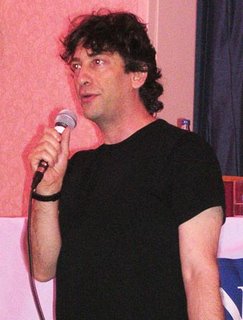 Just got back from FantasyCon ... pretty awesome this year, with guests Clive Barker, Neil Gaiman, Ramsey Campbell, Juliet E McKenna and Raymond E Feist. But there were also LOADS of other creative folk there: Steve Gallagher, Paul Cornell, Simon Clark, Joe Hill, Pete Crowther, Storm Constantine, Anne Sudworth, Mark Morris, Susanna Clarke, Colin Greenland, Steve Lockley, Paul Lewis, Paul Finch, Simon Morden, Dave Sutton, Sarah Ash, James Barclay, Mark Chadbourn, Chaz Brenchley, John Connelly, Gary Greenwood, Dominic Harman, Graham Joyce, Amanda Hemingway, Matthew Holness, Paul Magrs, Adam Nevill, Steve Savile, Tim Lebbon, Les Edwards, Stephen Jones ... and many, many more I can't recall (sorry guys and girls). I was Master of Ceremonies for the event which basically meant doing all the announcements and stuff, hosting a quiz on Friday night, the Raffle on Saturday night and the Banquet/Awards on Sunday afternoon. Exausting a little, but great fun - especially when things didn't go quite to plan calling for ad libs and hasty covering ups. There were *loads* of people there this year - due to the combined effect of the guests and that FantasyCon is just the best literary conference going - and everyone seemed to have a great time, with lots of favourable comments and mutterings being heard. But it was great to catch up with Neil Gaiman - we had many conversations about new Who and books and stuff which was cool - and also caught up on news of projects - like the film of Neil's STARDUST which sounds simply awesome. And Clive ... I'd last seen Clive some 10 years ago, and when I finally got to see him after one of his panels, he looked at me, and then exclaimed 'Dave!' and stood and gave me a massive hug. I have no idea what the others around thought! 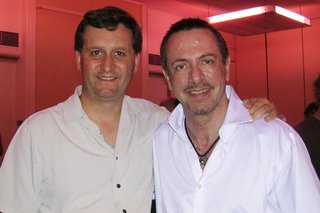 Here's a pic of me and Clive at the end, after the Banquet and the presentation of the Awards. 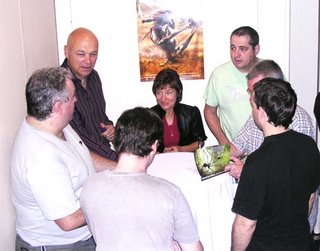 We had a launch for the book SHROUDED BY DARKNESS which went really well - the pic is of a group of the contributors: L to R clockwise: Paul Finch, Simon Clark, Dawn Knox, Steve Lockley, Paul Lewis (with book). The book went really well which was pleasing. So, a great weekend overall. Lots of interest in Telos' books, and a great many of the new horror anthology, SHROUDED BY DARKNESS, which is raising money for the DebRA charity, were sold - so go and order one from Telos this instant (www.telos.co.uk) David
Posted by David at 10:01 pm No comments: