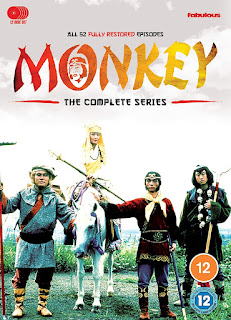 What a strange and memorable series Monkey is ... I'm sure many readers of a certain age will recall the adventures of the Buddhist Priest Tripitaka (Masako Natsume), and his travelling friends Monkey (Masaaki Sakai) (a monkey God), Sandy (Shiro Kishibe) (a fish spirit) and Pigsy (s1: Toshiyuki Nishida, s2: Tonpei Hidari) (a pig spirit), along with (in the second season) Dragon (Shunji Fujimura), a horse which can turn into a human ...

We've just finished rewatching the entire series, and so I felt a few words of review were in order.

The show originated in China, along with its soul mate, The Water Margin. Whereas The Water Margin was for adults, with more serious plots and storylines, Monkey was definitely for kids. It had lots of fighting, demons who were basically humans wearing furry hats and make-up, and who often as not had horns on their heads, and plots which presented the simplest of moral challenges for the protagonists. 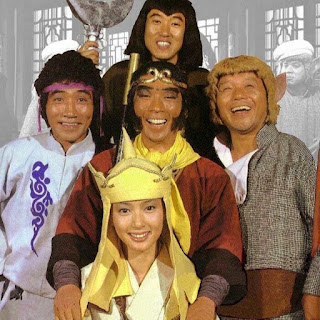 Series One is the better of the two. Here, it all seems to take itself more seriously, and the actor playing Pigsy is better (he changes for Series Two for no apparent reason).

Why the show succeeds is in the dubbing into English. As with The Water Margin this was undertaken to try and match the words to the characters' lip movements, rather than being a literal translation of the dialogue. Thus it all seems to work, even if what they're saying isn't what was intended. This all reminds me of the dubbing of The Magic Roundabout, where the original French soundtrack was scrapped, and it was given a new English narration based on what the writer thought the story was about, rather than what it actually was. I have no idea if any episodes of Monkey ended up being about something completely different, but it's amusing to think they did. 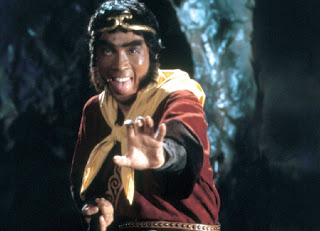 Another thought that struck me was how the series prefigured all the Power Rangers shows, which also have a band of heroes fighting monsters and demons, many of whom have outrageous costumes and make-up ... there are a lot of parallels.

You may notice that the monk Tripitaka, is voiced by a woman ... well he's played by one as well (Masako Natsume) ... but no-one ever comments or suggests that the character is anything but a boy! It's the British Pantomime tradition alive and well! 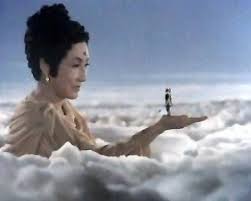 When we move into Series Two, several things change. The titles are different, and not as good. The closing title music is different, and not as good. Pigsy is played by a different actor, who is not as good, and indeed Peter Woodthorpe seems to give a different vocal performance to the character, again which loses much of his charm. Overall the show becomes sillier, more one-note and less compelling. The stories are all samey and generally involve a village being terrorised by Demons which the group have to try and defeat ... It's a shame really as the series still had much potential which was unfulfilled.

One thing I really enjoyed were the visual effects. Generally speaking, every panoramic longshot of mountains or lakes or whatever were models, with tiny figures of the characters in them, and the effects of Monkey on his cloud, spinning through the sky, and other such visuals, are superbly realised. There are such a lot of them too - the effects budget must have been quite high for the series. 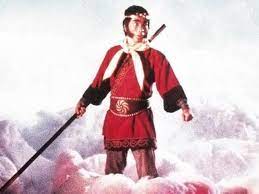 There's surreal episodes too, like one where a small child has toothache, and so Monkey reduces himself in size so he can enter the boy's mouth and beat up all the decay who are singing songs as they attack the enamel! The effects here are again tremendous, and the sets and costumes suitably strange.

Overall, Monkey is a fun little series, which benefits from a rewatch. It's not quite as good as perhaps we remembered, but it has lots to commend it. 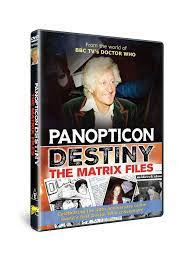 Anyone fancying a delve back into the early days of UK fandom, and, indeed to the first ever convention dedicated to Doctor Who, could do much worse than to seek out these DVD releases from Reeltime Pictures.

The year was 1977, and a young chap called Keith Barnfather organised the world's first ever Doctor Who convention ... held in a Church hall in Battersea, London, the event was attended by about 200 fans from all over the country (and some from overseas!) who were members of the Doctor Who Appreciation Society, under whose aegis Keith organised the event.

In 2017, 40 years later, Keith organised a reunion event, which brought many of those same fans back to the same venue to meet and reminisce and to see special guests including John Leeson, Mat Irvine and Terrance Dicks talk about the event and their memories of it.  The whole thing was recorded by Reeltime Pictures and released as Panopticon Genesis the same year.

Now Keith has delved into his storage cupboards, and found the original cassette tapes on which he recorded the panels at that original convention all those years ago. Back then there was no budget video, and no-one thought, or had the funds, to record the event for posterity on film ... so all that remains are still photographs, and Keith's tapes.

Thus Panopticon Destiny revisits the event with footage from the 2017 gathering, along with commentaries from various people involved to set the scene for the audio restoration of these tapes. The task was undertaken by Alistair Lock, an audio genius of some standing, who talks us through what he had to do to extract listenable sound from the murk and hiss and hum of the years. What he achieves is quite incredible, and you can hear Jon Pertwee and Tom Baker's replies to questions with clarity.

It's incredible to think that this was the first ever time that the actors - including Louise Jameson - current producer Graham Williams, Visual Effects designer Mat Irvine, and writer Terrance Dicks, had ever been faced with a roomful of 200 or so fans and taken questions from them! There had been smaller events and gatherings previously, but nothing on this scale before.

There's also included on the DVD a panel at a more recent DWAS event - 2017's Capitol II - where Keith Barnfather, Kevin Davies and Andrew Beech talk about that first ever convention.

It's an incredible glimpse back into the past, and it's superb that Keith had the foresight to record - and keep! - the cassette tapes of the panels ...

The audio from that 1977 event is also presented on the DVD ... so you can listen again to those questions and answers from 44 years ago!

The DVD is available from: