What a strange little tale. I think this is another story where it could really have done with a second episode to add some meat and depth to the situations. As it is, the whole thing is so fast and furious that you don't get to know anyone. Which is a shame as the episode is about relationships and we could have done with more time to explore it all. The Doctor and Rose are at a school - Deffy Vale High School as it tells us on the wall of the canteen hall - as a result of Mickey calling them to let them know that something strange seemed to be happening. There are two plots emerging, and neither have the slightest thing to do with each other - a very strange state of affairs and something which doesn't work in dramatic terms. The established wisdom is that in a drama (be it literary, theatre, TV or film) it will work better, be more rounded and 'feel' right if all the characters are driven by the same or similar needs or aspirations, if the core themes are reflected throughout. But here we have a very strong theme of companionship and love running side by side with the story of a bunch of generic 'monsters-r-us' trying to gain ultimate power for themselves. These are uneasy bedfellows and show why this story should have been longer. It would have been far more effective if, for example, the Krillitanes were not evil, but were seeking something related to that which Sarah Jane is seeking: closure on a period of her life; maybe hanging onto past dreams ... Then the whole of the mcguffin about the intelligence-enhanced schoolkids using computers to solve the so called 'Skasis Paradigm' (perhaps a sly acknowledgement of the Skeksis from the 1982 Henson film Dark Crystal the design of which seem to have inspired the Krillitanes) and provide ultimate power to the Krillitanes could have been dropped and rethought. If it was really that easy to crack this paradigm then why has no-one else ever done it? As it is, the Krillitane plot is the poorest aspect of the episode. But by far the strongest element was the complex relationship between Sarah Jane Smith, Rose, Mickey and the Doctor. Sarah is feeling cheated, as though there was something wrong with her, that she had done something wrong which was why the Doctor never came back for her and why she spent the rest of her life waiting for him. Rose realises that she is just one in a long line of travelling companions for the Doctor, and that just as the Doctor never mentions Sarah, so may she never be mentioned once she leaves him. Mickey realises that he is the robot dog - the reliable source of information. The 'stay in the car'/'stay at home' character who has all the answers. And the Doctor is forced to admit that he loves his companions (though he cannot use the word), and is alone despite seeing them all grow old and die. It's a hard equation, and yet the scripting and the acting allow it to soar, and the end result is a sequence of realisations and acknowledgements on all levels which brings tears to the eyes. The idea of Mickey realising that he is the 'robot dog' also made me wonder if this was setting up something for later on. With Mickey travelling with the Doctor and Rose at the end (much to Rose's displeasure) does this mean that he will sacrifice himself for them the same way that K9 does in this episode? Certainly food for thought. 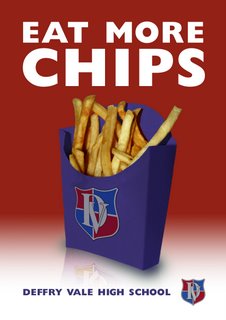 Unfortunately there are some less than satisfactory elements. The inclusion of the reference to Torchwood at the start was OK I suppose, but are we going to have this rammed at us every week? What was all the stuff about the Krillitane oil about? Where does the oil come from? Why does the school explode at the end? Did K9 detonate himself? It's probably, however, the Krillitanes exploding after getting the oil on them - as happened with the dinner lady earlier in the episode. And the cliched fat kid, Kenny, who saves the day. Oh dear. Also, why did Sarah have K9 in the back of the car at all? She said the dog didn't work and had broken ages ago. Maybe she drives around all day with the dog there? And how did he get out of the car to save the day in the canteen? Maybe we can just gloss over this - perhaps Mickey lifted him out after crashing through the school doors. There are some lovely elements too. I was especially impressed with the simple effect of the Krillitanes attacking the staff seen through the frosted staff room window. Very nicely done. As were the Krillitanes themselves, though a little too CGI fast, they looked quite effective. I was slightly puzzled as to why Mr Finch (or Brother Lassar - spelling guessed at) was human when the rest were bat-things. I know they sort of explained this, but I don't think it made much sense. And if Finch was in human form, how did he get on top of the building opposite the cafe to keep an eye on the Doctor and co? A final puzzling point with regards to Finch. He hears the Doctor say he's a Time Lord, but then seems to know that he's the last surviving one. But the Time War was in the future wasn't it? The Dalek in Dalek had fallen back through time and that was to the year 1938 (50 years before 2012 when Dalek was set), so how can there be no Time Lords in the year 2006 or whenever School Reunion is set? Overall I really enjoyed School Reunion, despite all my prior reservations about bringing back Sarah and K9. Elisabeth Sladen did a great job with the character and the role and managed to bring out the pathos well. Her early line 'I thought you died!' sounded so like her earlier incarnation, and she managed to play off against Billie Piper very well indeed. Anthony Head was awesome as Finch - a superb character, underplayed, and very well observed. Every movement, every word was delivered with understated precision and was a joy to watch. Next up ... clockwork people ... spaceships ... history ... I have no idea what The Girl in the Fireplace will be like!
Posted by David at 12:33 pm 1 comment:

Doctor Who - Tooth and Claw

So the BBC tries to up the anti with Doctor Who and to provide more content for the pre-teen audience that the show has attracted. However Totally Doctor Who was a shambles from start to end. First of all, it didn't have any real sense of being related to Doctor Who at all. Aside from a somewhat confused title sequence showing cartoon monsters and Doctor and the music, the presenters seemed so out of their depth it was embarrasing. Liz Barker reportedly left Blue Peter to do this ... boy was she mis-advised. I wonder who it was aimed at as well - Doctor Who is primarily for a family audience (ie aimed at adults and kids love it as well) and yet the BBC seem to think it's watched primarily by under-5s judging from Doctor Who Adventures magazine and some of the other merchandise, and so this show tried to be hip and with it for today's 'yoof' and totally missed any target in doing so. It will be interesting to see how it develops and if it gets any better as it goes along ... to be honest it can't get worse. It reminded me most of those Saturday morning shows that ITV tried to do to compete with the BBC's Live and Kicking when it was at its peak - almost all totally missed the mark. To be honest I would rather have seen all of that Doctor Who film made by the two fans and featured on the show as that was pretty impressive given their resources.
Posted by David at 12:39 pm 1 comment:

One of the nicest things about going to the annual FantasyCon event is the friends you make and renew every year. It's great to have an annual event where you can wander through a hotel and see people you've not seen for a year and to catch up ... to spot writers, editors and artists at the bar and in the restaurant and to sit down for a chat and a drink and to renew old friendships. At FantasyCon in 2005, we were, as usual, in the bar, and there was discussion about great horror films and why we loved them. Usual bar chat really. But then Mark Morris, a talented author himself, suggested collecting some of these stories of love and passion in a book and Cinema Macabre was born. Various people were leaping in with suggestions of films to cover, and my suggestion was Suspiria, an incredible slice of Italian giallo from Dario Argento which I have loved ... well forever. So I duly penned my piece and submitted it ... 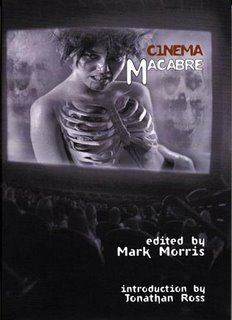 Now, this week, the final book arrived ... and Wow. Oh my God was I blown away. It's been produced by Pete Crowther and the folks at PS Publishing and it is possibly the most gorgeous book I have seen. From J K Potter's eerie cover to a nice black and white photo section it looks and feels wonderful. And that's before you even get to the words. Jonathan Ross contributes an introduction and then we're into appreciations of films from the likes of Simon Clark (The Unknown), Neil Gaiman (The Bride of Frankenstein), Brian Aldiss (Les Diabioliques), Jeremy Dyson (Night of the Demon), Christopher Fowler (Witchfinder General), Mark Gatiss (From Beyond the Grave), Simon Pegg (Dawn of the Dead), Muriel Gray (The Thing), China Mieville (Razorback), Graham Joyce (Jacob's Ladder), Ramsey Campbell (Lost Highway) and Justina Robson (The Blair Witch Project). There are fifty films discussed here and some are obvious choices while some are more surprising. But none are dull. The standard hardback edition is signed by Mark Morris and is limited to 500 copies while there is also a slipcased deluxe hardback, which is limited to 200 copies and which is signed by all of the contributors ... yes, that's ALL of them. The 50 writers, plus Ross, plus Potter for the cover. Copies of both editions are available direct from PS Publishing if you're interested. The standard edition is £25 while the deluxe is £75. Visit www.pspublishing.co.uk for more details. I'm so proud to be a part of this project, and hearty congratulations to Mark and Peter for such a superb job in pulling it together.
Posted by David at 4:30 pm No comments:

So ... we know now it's going to be April 15th ... the new series of Doctor Who starts then. Personally I can't wait. And apparently the trailers and general PR hoo ha starts today as well, so keep your eyes open. Radio Times are planning another Doctor Who special for the launch, with a cover and an insert special magazine and there will be coverage just about everywhere. I'm planning to resume the regular reviews here each week so I hope folks will stop by and have a look ... until then.
Posted by David at 9:37 am No comments: