Doctor Who: The Faceless Ones - Animation 'Easter Eggs'

As I'm sitting at home in 'social isolation' due to the Coronavirus Pandemic, the release of the new animation of the Doctor Who story 'The Faceless Ones' came at the right time!

But what a lot of little 'Easter Eggs' the animators have taken upon themselves to add to the completed imagery - none of which were in the original story!

I actually found these somewhat distracting from watching the production - which on the whole is a pretty good effort, even though the animation style and approach grates with me. I like the story and the last three episodes are excellent.

But anyway, here's a list of the things which I spotted, including a couple of deviations from the televised story ... In fact there's quite a lot of these as comparison with the two existing episodes proves - the original direction and camerawork is stylish and varied, whereas the animation (out of necessity I guess) tends to be more flat and basic. We lose Sam Brigg's outrageous hat for a start!


I also noticed that all the Policemen seem to be clones and look identical to each other. Another cost-saving measure for the animation I assume.

Anyway, here's all the added extras I spotted ... if anyone spots any more then let me know and I'll update the list!

We see images of the Roger Delgado and the Sacha Dhawan Masters on the noticeboard as the Police leave the station.

There's also a poster for WATERFIELD ANTIQUES on the board (This references the next story EVIL OF THE DALEKS, wherein Edward Waterfield owns an antiques shop). I'm not sure why the police would have this on their information board mind you ...

There's also a large poster for a Variety Night but I can't see any DOCTOR WHO connection with that - it's vaguely TALONS OF WENG-CHIANG-y but obviously totally the wrong year!

In the hangar where the chap is killed with the raygun we have cans of HICKMAN'S Anti-Freeze, Oil and Merlot(?) and in the office there's a file with HICKMAN'S ORDERS on it (presumably referencing ex-DWM editor and cover designer CLAYTON HICKMAN)

There's a brand name on the side of the monitor used to track the aircraft: CONDON LTD (this references well known fan Paul Condon who died in 2019)

On the newspaper that Jamie and the Doctor are reading, there's an advert for BARNEY'S ELECTRICALS and their ROUGH AND TUMBLE machine (this references the scene the animators cut from the animation of THE MACRA TERROR of just the same device)

There's also an advert for OLD SMUGGLERS WHISKY (slightly obscure but this could be referencing the story THE SMUGGLERS? Not sure where the Whisky comes in though - the available evidence suggests that the Smugglers were smuggling Rum, though there's nothing in the dialogue to suggest what the drink is!)

The newspaper they read at the airport is the Mill Hill Times, where Troughton used to live and where there's a theatre named after him...

The RADIO TIMES edition on sale in the shop behind the Doctor and Jamie is actually the one for just before when this story was transmitted, not the one for when it is set! Here's some covers:

'WAR MACHINES DEFEATED' is the headline on the newspaper on the Commandant's desk - interesting ... At the end of the story, Ben states that it's July 20 - the day it all started ... here's what Jon Preddle determined in his amazing work of Doctor Who Chronology, TIMELINK: 'In order to reconcile The Faceless Ones' dates with the dates in The War Machines, it is necessary to're-interpret' Sir Charles' comment [about C-Day or Computer Day]. It is more likely that he got the date wrong than the day of the week, so we can accept that "Monday" is correct, but that "July the Sixteenth" is wrong. On the basis that 1966 is the correct year, we can make C-Day to be "next Monday", July the Eighteenth. The story therefore starts four days prior to C-Day, 14 July. The duration is three consecutive days plus the day when the TARDIS leaves . As given in The Faceless Ones, that day is 20 July, so a further four days passes between WOTAN's destruction and the Doctor's departure.'

The dates are all a little strange anyway. On the Chameleon Tours desk there's a little calendar thing which says SATURDAY ... so presumably it's a Saturday?  Except that July 20 was a WEDNESDAY ... so maybe three days are meant to pass between the activity in the airport at the desk, and the end of the story?  I'm not sure that can be accounted for by what we see on screen ...

Here's what Jon Preddle assessed in TIMELINK: 'In the final scene at the hangar in The Faceless Ones, the date "July the Twentieth, 1966" is given by the Doctor (presumably his "12 hours" airport pass has the date on it). In The Evil Of The Daleks it is stated that the TARDIS was stolen from the hangar at "" (the time appears on Bob Hall's time sheet: "Police Tel Box. Collection: "). In Ep4 of The Faceless Ones the Chameleon Tours flight to is at "1530 hours", i.e. . Therefore these two events are on two separate days: the final scene of The Faceless Ones and the start of The Evil Of The Daleks are set on , with the bulk of The Faceless Ones therefore taking place on . Ben and Polly realise that is the very same day in which they first entered the TARDIS (see The War Machines).'

Maybe that SATURDAY date thing on the check in desk has not been updated then ...

The eyechart which is used to check the Chameleon Conversion has BADWOLF and BIGRON spelt back-to-front.  (BAD WOLF is the 'key phrase' from Doctor Who season 1 in 2005; and BIG RON was a character in EASTENDERS used as part of a fundraising effort around the charity skit DIMENSIONS IN TIME. Viewers were encouraged to call in on a pay telephone line to vote for one of two EastEnders characters to help the Doctor. In the competition, between Big Ron and Mandy Salter, Mandy won with 53% of the vote.)

In the airport there's an advert for HIBBERT PLASTICS (referencing SPEARHEAD FROM SPACE and the plastics factory). Hibbert was the Production Manager of the factory, called AUTO-PLASTICS by the time of 'Spearhead from Space' and it's debatable whether he was actually the owner as well. There's no evidence to suggest this. Perhaps HIBBERT PLASTICS was a company run by Hibbert which was taken over by AUTO-PLASTICS and Hibbert given a Production Manager job as a result ...

In the airport there's also an advert claiming LESS MUCK, LESS DEVASTATION, LESS DEATH - which is for GLOBAL CHEMICALS, the company polluting the Welsh mines in THE GREEN DEATH. The phrase echoes something said by Professor Jones in that story: 'Muck and devastation' which he possibly used if the company was using this as it's catchphrase in advertising.

There's another newspaper stuffed on a table with a news report about the War Machines and a photograph of William Hartnell as the Doctor.

There's an error here in that the Doctor picks up two white Chameleon arm sheaths but has a black and a white one when he's in the control room later.

When we see the Police emerge from the station again, the image of the Sacha Dhawan Master has been replaced with one of the Meddling Monk (from the story THE TIME MEDDLER) not quite sure how there can be a photo of the Monk - cameras weren't invented at the time he appeared in the show!

Thanks to Robert Haynes for pointing out that some of the cans on shelves have something else written on them ... 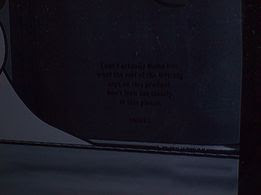 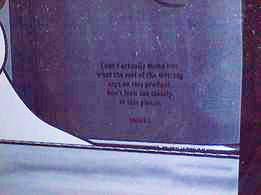 It says:
I can't actually make out
what the rest of the writing
says on this product
don't look too closely
at this please
thanks