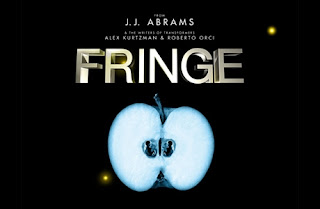 We've just finished watching the whole of the series Fringe and it was an interesting experience. We'd heard a lot about the show from friends, mostly raving about it and saying how amazing it was ... and so we thought we'd see for ourselves.

The series follows the exploits of a small group of people who comprise the FBI's Fringe division - investigating strange events which normal methods cannot explain. In this way it's a little like The X-Files in it's set up, but it takes a completely different direction to that show.

Fringe is headed by Agent Phillip Broyles (Lance Reddick), a no-nonsense officer who acts very much as the voice of reason. He is often seen striding with the others to the scene of the event, explaining everything they need to know. In this respect, he's a little like the caricature which Sergeant Asap portrays in the Touch of Cloth comedy crime series. Then there's Olivia Dunham (Anna Torv). Blonde, beautiful, but haunted by her past (and so she should be, as we discover). She's the perfect, logical, FBI agent looking into these strange happenings. Helping her, and in many ways the mastermind behind Fringe, is Walter Bishop (John Noble). Old, bumbling, forgetful, and with a penchant for red liquorish sticks, Walter knows all the science and the tech and pulls random things from his fragmented memory which helps them to understand what is happening. Walter's assistant is Astrid Farnsworth (Jassica Nicole), a sassy girl, who passes him his test tubes and generally dotes on him. Completing the Fringe 'family' is Peter Bishop (Joshua Jackson), Walter's son, a fairly serious young man, who helps out with the investigations.

So as the series starts, and with Seasons One and Two, each episode, the Fringe division investigate some strange happening: all the passengers on a plane have been infected with some flesh-dissolving toxin; a baby born fully developed and then aged to death in a matter of minutes; a man able to channel electrical energy; genetically engineered parasites; all are fair game for the Fringe team. All this strange activity seems centred around a lake, and there is a 'pattern' to what is taking place. This also seems to lead back to a massive conglomerate company called Massive Dynamic, and the CEO there is Nina Sharp (Blair Brown). 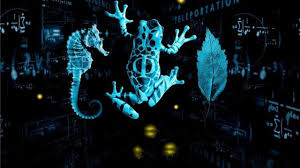 These investigations also often seem to point back to Walter's past, and the things he can't remember - he spent a long time in an institution as he was deemed insane, but then Peter rescued him. And this starts to form the backstory.  It seems that Walter was working with another man, William Bell (Leonard Nimoy), and that Billy might still be out there ...

This basic idea forms the backbone of most of the seasons. But at the end of the first season, we learn that there is more to all this than meets the eye. There is an alternate and parallel dimension, with equivalents of the Fringe team living there ... in fact it's an almost duplicate of our dimension (but they have airships and a gold Statue of Liberty!). But sometimes the dimensions can touch, and bleed through, and this accounts for several of the Fringe events. But there's more than this ... it is revealed that Peter is actually from the parallel dimension, and that Walter, having lost his own son, arranged to travel between dimensions to steal Peter away.

And so the scene is set for conflict ... But then we have the Observers. A strange, bald man seen and pictured at many of the Fringe events (apparently he appears somewhere in every episode of the series in which they are investigating an event), and indeed at many significant events throughout Earth's history. He never seems to change, never ages, but is always there. As we discover, the Observers have been watching us through time, making sure that significant events happen when they should, and that the balance of time is maintained. But this was until Peter is rescued from drowning in a lake by one of the Observers - a creature called September (Michael Cerveris) - and in doing so, he changes the course of history. 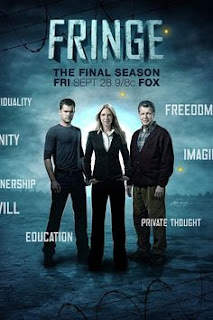 Thus Season Three follows the two parallel universes as they each try to understand what is happening and why. There are parallel Olivias and Walters and Astrids and Broyles', and the two sides investigate similar Fringe happenings ... and of course they can cross over, one to the other as well. There's an element here too of distrust, that each side thinks the other is behind everything. We found that Series Three dragged terribly for the first half, not seeming to know what it was doing or where it was going, then it settles down to being more shenanigans from William Bell in trying to disrupt the dimensions.  Added to which Faux-livia (the Olivia from the alternate dimension) swaps places with our Olivia, and has an affair with Peter while spying for her side ...

Series Four starts when the Observers decide that to get time back on track, they have to remove Peter from existence, so they do this, but Peter is too strong, and keeps bleeding through. Thus Season Four is a confused mess ... the Fringe Team don't remember Peter at all, and as time has been reset, some of the Fringe events and characters which we had previously seen and dealt with reoccur ... Peter comes back properly and Olivia regains her memory.

One of the episodes is set in the Eighties, and has a suitably retro title sequence ... and another is set in the Future, where the Observers have taken over and are running Earth like some military state. And indeed, this is then what is used for the basis of Season Five. The Fringe team were all trapped in Amber (a gaseous substance which hardens instantly to an amber crystal. This had been used in the parallel universe to block off areas where the universes were bleeding together to keep both universes safe) for twenty one years, and now are released by Peter and Olivia's daughter Etta (Georgina Haig) to help in the resistance against the Observers.

But there are issues with all of this. The Observers could time travel and appear at any time, so why do they have a base in a fixed time, and why do they want to take over anyway? (It says on Wikipedia: Numerous Observers from the 27th century, having made the Earth uninhabitable in their own time, travelled through time to take over the Earth from humanity, instituting a Purge to kill off a large fraction.)  Battles with them would be pointless as they could just step back ten minutes and disable any plans that humanity tries against them ... but all this seems to be forgotten. Also, Peter gets an Observer chip and puts it in his neck ... not sure why, but the implication is that he is becoming like them - he can move fast, and loses his emotions and hair ... but part way through Season Five this is forgotten about and never mentioned again ...

Unfortunately this inconsistency with the back story hampers the ongoing series. There are some great characters and ideas here, but if people and things are going to change their operating models from one episode to the next, there's something wrong. Season Five also starts off with Walter, 21 years previously, recording on video tapes all the steps to defeat the Observers, and then sealing them all in their lab with Amber so they can't be seen. So the team have to re-access their lab (which is in the middle of Observer Central, so very unlikely), and get the tapes out one by one with a laser ... but then they are obscure and obtuse ... so the team manage to do about three missions to get the elements they need, but then it's all forgotten again, and for some reason September is now a normal human living in hiding (again from Wikipedia: now more human due to his 'biological reversion' by other Observers for aiding Fringe), and he comes and builds the machine that they have been trying to create ... this leads to the endgame (there are only 13 episodes in Season Five) where they have to somehow change history to stop the Observers taking over. But as noted, these creatures can time travel themselves, so I can't see how this could possibly work ...

There's some great conceits all the way through. The title sequence changes depending on which reality we're following - Blue for ours, Red for the Alternate Universe, Orange for both, and Black for the Observer-controlled future. The characters are all brilliant, with Anna Torv's Olivia Dunham, John Noble's Walter Bishop being the stand outs. Especially when they get to play their alternate universe counterparts, who have different body language and approaches. It's all very well done indeed.

Overall, I'm very glad we spent the time to visit with the Fringe team. The show is original and fast paced as you might expect from J J Abrams, and the acting and scripting is usually first rate. There are some brilliant episodes, and even a partially animated one! The show manages to stay bright and relevant and compelling pretty much all the way through, but as mentioned, it does have its issues, and for Season Three especially, you need a little perseverance to get through the first half! The series is very complex, and it has taken me some time to pen this little piece, trying to ensure I get the facts right, and realising that I missed several elements of the show as we went through!

It feels that after the first three Seasons they started to run out of ideas (but there are so many ideas and concepts in the show - far more than I have mentioned in this quick review - check out the Wikipedia pages for a more detailed summary of the seasons and their themes and backstories) that this must be wrong ... there is a sense of sameness creeps in though, not helped by the characters being taken back and 'reset' at various points both in our and the alternate universe), but kept getting renewed and so had to come up with reasons and plots to keep it all running. The individual episodes of investigation mostly stop around Season Three, and the show becomes all about the characters and backstory, as common with nearly all genre shows, and as I have said in the past, it suffers for it.

If you'd like to see all the different title sequences they used, well here they are ...