Chose this film from Blockbusters because a) it's a comedy and we were in the mood for something a little lighter, and b) it's got time travel, which suggested something a little different. It's actually a very ordinary film. I don't think I laughed at all throughout, and the situations were very predictable and staid. Just what you might expect a generic 'lads' film to be like after it's been filted through 200 studio executives, all having their own crack at the scripting. Far superior is Doghouse - similar initial idea of a bunch of pussy-whipped losers heading off for a holiday, but far better in execution (and it has zombies in, which is always a winner). 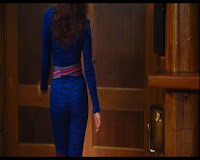 About the best bit in it is when one of the young ladies comes racing into a room dressed in a skin tight ski outfit - she certainly has a nice figure! But the promise of anything more is non-existant. The humour is, if anything, down at the Porkies level, with projectile vomiting and removing faeces-covered keys from a dog's bottom being just two examples of the gross-out factor in the film. Completely out of place and unnecessary really. The time travel element is very lightly used. Basically the hot tub gets some 'Hi Energy' drink poured in it and transports our leads back in time. Then there's some slight interest in that one ends up being the father of the youngest in the group, and a running gag about how a bellhop loses an arm ... but it's all very predictable. A shame as the basic idea - a back to the eighties type of vibe - is not bad. They should have ditched the crude gross-out humour and gone for some good belly laughs instead ...
Posted by David at 9:46 am 1 comment:

Sometimes life throws stuff at you ... again and again and again. I'm aware that I've not blogged as yet on the ending of that Matt Smith season of Who. Not talked about Sherlock. Not mused on the new merchandise which has come out. Not discussed FantasyCon, nor told you about all the films I've been watching on DVD ... or the old Telly shows I picked up from Network DVD ... and probably lots lots more. The reason. Life. And having too much to fit into the days. I seem to have been living in a whirlwind of late - travelling hither and thither, visiting friends, going to conventions and events, working, more working ... So a few highlights! 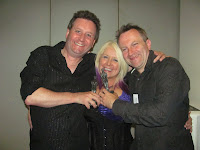 At FantasyCon, the annual convention for the British Fantasy Society, I was humbled to win the British Fantasy Award for Best Small Press! So taken aback was I, that I stumbled through my words on stage, welling up, and barely got away intact! It was amazing for Telos to win in our 10th year of operation, and on the Telos site blog, there's a piece about it all in more detail. Check out www.telos.co.uk for that. I also managed to leave FantasyCon as Chair of the BFS! Not sure how that happened - I volunteered! Must be mad ... but there's some great things that the Society can achieve, and I hope I can help them do that ... we shall see. Visit www.britishfantasysociety.org for more info on the Society.

My partner Sam has been doing very well indeed with the launch of her third novel, called Demon Dance, it's a vampire tale with a difference. Time travelling vampires! There's a thing. She's a great writer and I urge you all to check out her books, starting with Killing Kiss (which as well as a paperback from www.murkydepths.com, is also available as a download for Kindle, iPhone, iPad and a variety of digital editions from places like W H Smiths and other online stores).

Telos has just released several very cool titles, including a guide to the last days of Tennant (End of Ten) plus horror from Graham Masterton (The Djinn) and an amazing crime noir novel by Graham with William S Burroughs! Not often that Burroughs has a new work in print these days as he died in 1997 ... but Telos has one! Seek out Rules of Duel if you're intrigued, and like a shot of sixties paranoia fiction about authority and private investigators and surrealiarity in Burroughs' expected style. It's a book which challenges the reader, but which really delivers in a poetic and insidious way if you persist. All available from www.telos.co.uk.

We also have pretty much wrapped on Wiped! a new guide to all those frustratingly missing Doctor Who episodes. It's a fascinating tome of tables and discovery ... really enjoyable and informative. I'm proud to be publishing it! That should hit the mailboxes and shops in maybe 3 or 4 weeks time, depending on how long it takes to print. I know I keep saying that I'll blog more ... and honestly ... I mean to. I have no idea how Neil Gaiman does it! The man's a genius, and yet has time to write witty and erudite blogs every week! I guess it's organisation and routine ... I tend not to have either of those (well I do, or nothing would get done ... I mean that blogging tends to fall to the bottom of my things to do list all the time). Until I can find an hour or so to share some thoughts of new films, DVDs, and to get those comments about the Pandorica opening down on here ... be seein' you.
Posted by David at 9:07 pm 3 comments: