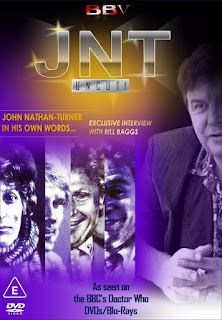 JNT Uncut is a new DVD release from BBV, and I think there's some words of explanation needed to put this interview into context, and to provide a little history.

Way back in 1993/4, a chap called Bill Baggs was a big fan of Doctor Who, and, like many other fans, he decided to do his own Doctor Who on audio. However, aware of the BBC's rights position, he took the actors who had appeared in the show, and made his own adventures, calling them 'The Stranger'. He even named his production company BBV, the rumour being that people might mistake it for BBC - in fact BBV doesn't even stand for Bill Baggs Video as you might expect, but Bill & Ben Video!

Baggs also licensed the rights to use various Doctor Who monsters from their creators and copyright owners, and thus we had audios featuring Zygons, Kryoids, the Rani, K9 (also featuring 'The Mistress', played by Lalla Ward), the Sontarans and The Wirrn, and written by people like Mark Gatiss, Nicholas Briggs, Lance Parkin, Robert Shearman (writing as Jeremy Leadbetter) and Pip and Jane Baker. Where he couldn't get the rights, he did something similar, as with the Cyberon - converted humans and nothing at all like the Cybermen ... 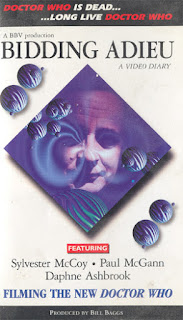 In amongst all this audio and video drama work, Baggs also released some documentary tapes. There was an interview with Sylvester McCoy and others, recorded by McCoy himself as a sort of 'travelogue' when he was travelling to the set and location for the making of the 1996 TV Movie, which starred Paul McGann as the Doctor. Bidding Adieu was something of a coup at the time, and there was much interest in what Baggs was doing.

Indeed, Baggs had in many ways picked up the baton of Doctor Who spin off audio started by Briggs and Gary Russell back in 1984 when they launched their own cassette series called Audio Visuals, a range of tapes which ran until 1989. It wasn't until 1999 that Big Finish started releasing audios, again starting with Bernice Summerfield spin-off stories, and Baggs had very much paved the way for them to do that with his own releases, showing what could be done with the monsters and the characters when freed from BBC budgets. 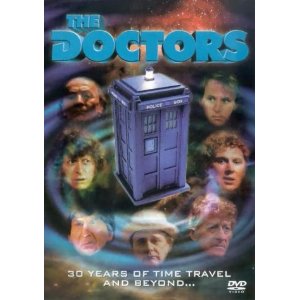 Another project which Baggs created was a video version of a factual book by Adrian Rigelsford called The Doctors. The book was released by Boxtree in February 1995 and covered the whole of the Doctor Who series to that date. Unfortunately Rigelsford's research methods extended to making up facts, interviews and quotes from many who were involved in the show, and then using them to enforce his own invented narrative about the show, and thus the book was largely discredited once historians and proper researchers got to see it. However, the book was released, and Baggs decided to do a video version of it. The problem of course is that in interviewing anyone he could find, much of Rigelsford's 'research' was discredited ...

However, Baggs managed to pull together a creditable documentary, called The Doctors: 30 Years of Time Travel and Beyond which was probably most notable for the interview with Peter Davison, where the actor was less than complimentary about the show.

The interview with producer John Nathan-Turner presented on this Uncut DVD was also recorded for this documentary. It was recorded at a time when Doctor Who was no longer being made by the BBC, and the year before the TV Movie was released. Nathan-Turner was at this time no longer a BBC Producer, having left the role a few years previously. He was, however, still involved with the merchandising, advising on the official Video and Audio ranges for the BBC.

It's a surprise therefore that he agreed to be interviewed by Baggs at all, but in this piece, recorded down in Nathan-Turner's home town of Brighton, he seems guarded and unamused by everything. Baggs can be heard off camera, asking questions and trying to lead Nathan-Turner in to offering opinions, but the Producer isn't biting, and is giving serious and straight answers. He comes over as professional, considered, and, indeed, given what went on in the Doctor Who Office, generous to his colleagues and actors in praise and understanding of what they were all dealing with.

There are no scandals rehashed here, and I wonder if Nathan-Turner had half an eye on keeping back anything which might be of genuine interest for his own documentary or set of memoirs.

It's amusing, however, to hear Baggs trying approach after approach to get the Producer to open up, and Nathan-Turner blocking him at every attempt. This isn't to say that the interview isn't interesting ... it is ... and Nathan-Turner has a lot to say - he's not responding with simple 'yes' and 'no' answers, but with long and considered responses. He's just not dishing the dirt. 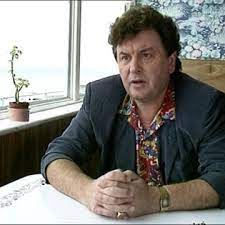 It's a fascinating interview with John at a certain point in time, which is why it's a shame that this is all that is on this disk. There are no sleeve notes which put the piece into context, there are no extras on the release - save some PR video for Baggs' audios and other current projects - and I have to say that the DVD sleeve is awful. With dark text on a black background, tiny font and poorly reproduced pictures, this just screams 'poor quality fan release'. However the quality of the piece with John is fine - Baggs however is very hard to hear, but then to be fair, his questions were never intended to be heard on the final interview anyway.

There is some further information on the interview on the BBV website: 'Bill Baggs first met JNT as a fan at the BBC Doctor Who Production Office in the 80's. He later worked with JNT on various projects. Bill conducted this interview as part of the BBV DVD 30 Years of Time Travel and Beyond produced in 1995. In the recording sequence of filming, Bill conducted this interview last in order to give John the opportunity to respond to criticisms from other contributors. The cafe where it was filmed was local to JNT in Saltdean, near Brighton where he was a regular visitor. When Bill first approached John about the documentary, John was initially resistant to take part, asking why he'd been left until last. However, once Bill explained the logic of 'save the best 'til last' John agreed.'

It's a shame that this text isn't also on the DVD case!

If you are a fan of Doctor Who, then this is an interesting view of John Nathan-Turner, with the story told in his own, measured, words at that particular time.

JNT Uncut can be obtained from https://bbvproductions.co.uk/products/JNT-Uncut-DVD-p339234531