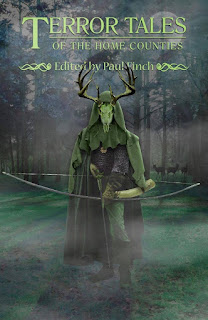 I'm absolutely delighted that the lovely Mr Paul Finch has taken one of my stories for his latest Terror Tales collection, Terror Tales of the Home Counties.

Moreso as that's where I was born and grew up: Tolworth in Surrey, near to Surbiton and Kingston-Upon-Thames. It was nice to revisit some childhood memories for the story, and to also bring in some real places, locales and people ...

I decided to set the tale down by the Hogsmill River, which runs through Tolworth and Berrylands and on into Kingston where it joins the Thames. Just beside the A3 road - which is the main thoroughfare from London down to the South Coast, and which is claimed to be the UK's busiest stretch of non-motorway road - there is a patch of greenbelt alongside the river called the Elmbridge Open Space. The river also runs under the A3, and just beside there, as in my story, there is a small block of flats (https://www.instantstreetview.com/@51.388114,-0.270892,329.16h,8.1p,1z). The tunnel under the road is there too, as are the hideouts and fallen trees where my brother, Alan, and I used to go as kids. It was a different world back then, when there were not predatory pedophiles hanging around on every street corner to snatch you away, and when your pocket money could buy you a bag of chews and sweets to last a week - or at least it seemed that way. The view of the river from the A3 can be seen here:  https://www.instantstreetview.com/@51.388533,-0.270032,343.93h,-7.03p,1z.

To the mix of my story I also added a real life character, sadly now deceased, called Moses. And it is from him that the story gets its name. For I have realised Moses - a friendly chap, outrageously dressed, who was often to be seen in and around Kingston and New Malden, just chatting away to people - as a sort of unknown and unappreciated superhero!

To find out more you'll have to read the story!  It's in Terror Tales of the Home Counties, edited by Paul Finch and available from Telos Publishing Ltd - https://telos.co.uk/shop/horror-dark-fantasy-and-science-fiction/dark-endeavours/terror-tales-of-the-home-counties/

In the meantime, here's a pic of the locale: 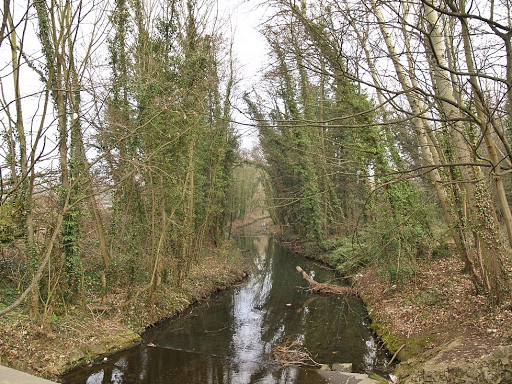 And there's a nice piece all about the river here: https://www.londonslostrivers.com/hogsmill-river.html

And if you'd like to see the real Moses in action, here's a couple of videos: