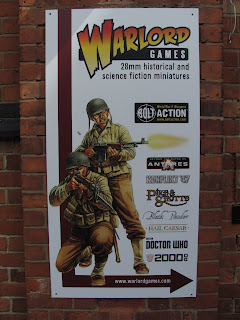 This week I was lucky enough to be invited along to Warlord Games' premises and factory in Nottingham for a sneak peak at some of the Doctor Who line which they have coming up, and also to have a look at how the figures are actually created!

Warlord launched their first Doctor Who game, called Exterminate! the other week, and this is a 'Dungeons and Dragons' type skirmish game, where your imagination is the only limit, and which can be played with all their various metal miniatures as 'inspiration' pieces. There was a launch day for this as well, and I was there, watching the game being played, and seeing how it all worked.

One of the most incredible things about the metal miniatures is the amount of detail that they get into the figures. They really do look like the actors and creatures they are supposed to be. This is because each figure starts life as a little model, and for current series characters, they also have a 3D computer model of the actor, so sculpting tends to be limited to the costumes - but even there there are 3D Models available of some things, so on occasion, no human intervention is needed!

For these figures, they will then print a 3D model in the right scale for initial checks. This is then used to create molds and then these to create masters, everything being approved along the way. Then finally the master is used to create casting molds, and the metal is then poured into these and spun, the centrifugal force pushing the metal into the mold and creating the figures.  They are then removed from the mold and checked.  Any which are not correct are discarded and the metal reused.

If a 3D model isn't available, then one is created. But other figures start life as a hand sculpted figure, which are then cast to create a master, and then it follows the same process as before. It's involved and time consuming, and is by far the most expensive element in the process.

There are also plastic models, and these are outsourced for creation.

For the 'sets' - houses and bridges and vehicles - these tend to be cast in resin, and so there's a similar process, except that the master mold is in silicone, and the resin is poured into each mold to create the pieces needed.  Before this happens though, the kit needs to be broken down into moldable pieces and it is figured out where the resin will be poured in.

There's also consideration for air holes and just how the air will escape when the resin or metal is poured. There is a lot of knowhow and technical skill involved - far more than you might think!

Out of these processes come the figures and kits ... everything you need to build vast armies of Doctor Who monsters and characters.

At the factory we also saw the packing process where the boxes are hand-packed with the right figures, all of which have passed several points of approval and inspection before they reach this point.

Warlord have a licence to produce the Doctor Who figures, and they have an impressive selection of items waiting in the wings.  On display we saw some of the items coming up ... including Ogrons, Missy and Davros ... and a set of every design of Cybermen, including an amazing Tomb set, created as a prototype for the moment, but intended for production.

They would like to see more of this sort of set created in the future, building the history of Doctor Who into an all-encompassing gaming system which allows free reign in time and space, and which can take in places the Doctor has visited ...

The painted figures are most impressive. Given that they are such a small size (25mm), the detail that the painters get into them is nothing short of mind-blowing.

Warlord have plans for a great many more figures and sets and games ...and Doctor Who provides an almost unending source of figures and ideas!  It's a perfect match!

Warlord's figures and the Exterminate! game can be purchased direct from Warlord at http://www.warlordgames.com or https://doctorwhotimevortex.com/

Here's a selection of the painted figures.  Remember that these are just 25mm tall!

C is for Children 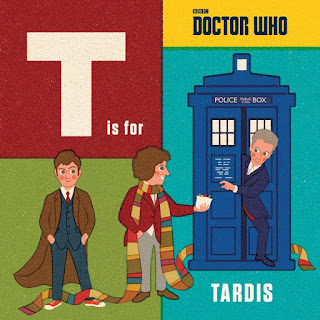 There have been many hundreds of books published on Doctor Who, and many approaches taken over the years ... but this year has seen the first pre-school Doctor Who titles made available ... one really does wonder who the target audience for this stuff is!  Personally, I think it's the adults who love the retro-kids concepts being played with!

The first book is T is for TARDIS, a pretty traditional picture book where we go through the alphabet and picture items from Doctor Who which start with that letter ... thus we kick off with A IS FOR ANGEL ... but we also have Amy pictured eating an apple, and there's also an adipose there for good luck ... I IS FOR IMPOSSIBLE and lo, we have Clara, along with an Ice Warrior ... and so on. 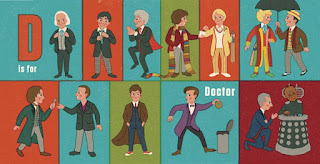 The imagery is basic but cute, and of course they have problems with Y where it is apparently for ALLONS-Y!!  (However there are Yeti pictured ... what about Yartek as well?) And X is for EXTERMINATE but at least we have a picture of an X-Ray as a poor chap is blasted ... but no Xeraphin?

It's a tricky one as is it for kids? In which case it doesn't really matter ... or is it for adults, in which case including other monsters would be fun ... so under W (where we have simply WARRIOR and a picture of the War Doctor, we could have had War Machine, Warrien, Weed Creature, White Robot, Wirrn, Wolf Weeds and Wood Beast ... and that's just from the Classic series ... 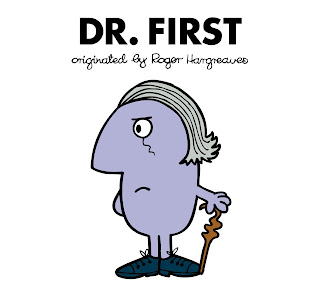 Of far more interest are a new series of Mr Men mash-up books with Doctor Who which celebrate each Doctor, depicted in classic Mr Men style ...  There are four titles in the initial release: Dr Twelfth, Dr. Eleventh, Dr. Fourth and Dr. First and each tells a story about that Doctor, featuring some classic monsters into the bargain.

In Dr. First, the Doctor comes up against the Cybermen while being grumpy ... the Fourth Doctor escapes from a Dalek via some coincidental techniques ... the Eleventh Doctor teams up with River Song and narrowly escapes from Zygons, Silurians, Angels, snakes and a giant spider to rescue his fez ... while the Twelfth Doctor tries to stop Missy as she steals things all over the place. 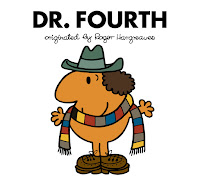 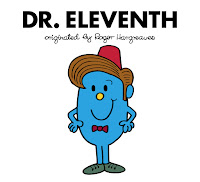 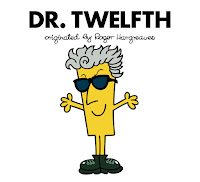 The books are in the same small format as all the other Mr Men titles, and are actually really cute and diverting ...  Just the thing for bedtime stories ... And at £4.99 each are are a much cheaper proposition than the picture book ...