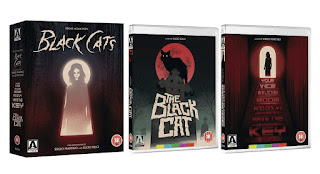 Lucio Fulci may be better known for his zombie fare, but he has made far more films than that, and this offering from Arrow is a Poe adaptation which was made between the heady rotting delights of Zombie Flesh Eaters and The Beyond.

It's not a bad film, but suffers a little from a lack of clarity around what is actually happening. There's a black cat (of course) which seems to have a propensity to attack those around it, scratching hands and faces and causing maximum damage for very little provocation. I think I would have had the beast tracked down and put down to be honest, but here it wanders through the plot with scarcely anyone paying it much attention until it attacks them. 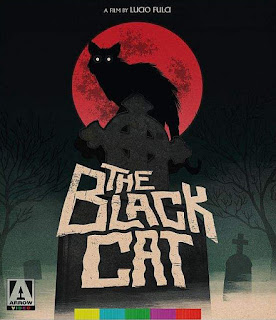 The main thrust of the film follows Patrick Magee as Robert Miles, a college professor and medium. He seems to be being stalked by the cat of the title, and indeed, the creature is killing people in interestingly and slightly supernatural ways ... so Magee does indeed catch the cat and hangs it, but this then unleashes more supernatural shenanigans.  In fact, Magee is a bit of a creep here and tries to hypnotise American Tourist Jill (Mimsy Farmer) which fails due to feline intervention, and who then kidnaps her and walls her up in his house (a typical Poe trope).  She is found when the police hear a cat crying and discover that it has been walled up with Jill ...

There is a strong film here struggling to escape from the script which is vague and meandering, and perhaps is showing a few Giallo roots wherein atmosphere and event takes the place of plot and progression (ie things happen for apparently no reason).  Which is a shame as Fulci does a good job of piling on the atmosphere and Magee is excellent in the lead - his voice is very creepy and adds a lot to the feeling of dread that the film starts to build up. 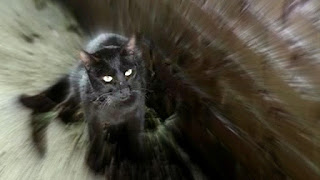 The print from Arrow is very nice indeed, with good colours and great clarity, which makes viewing the film even more pleasurable. It's just a shame that the script is a little too shakey.

Among the extras are a couple with Film Historian Stephen Thrower who discusses the film and visits the locations.  The location piece is actually lovely, and it's nice to see the 'then and now' comparisons, but someone should have told Thrower not to say 'Errm' every second. It's so jarring and is very distracting.  On the studio-bound discussion, I notice that he seems to be cut every couple of seconds, perhaps to remove the majority of these 'Errms' and 'Arrrs'? But some still remain. A shame as he seems very knowledgeable about the subject ... but not a natural performer for camera.

A final note: the DVD set from Arrow also contains the film Your Vice is a Locked Room and Only I Have the Key, but this was not provided for review. 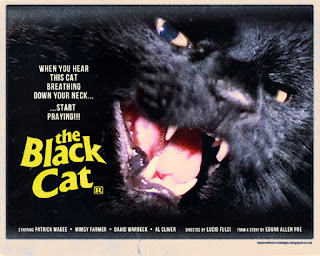 
YOUR VICE IS A LOCKED ROOM AND ONLY I HAVE THE KEY: 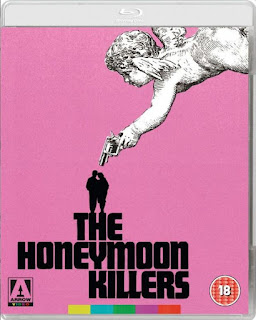 Based, albeit somewhat loosely, on the famous real-life story of the so-called ‘Lonely Hearts Killers’ Raymond Fernandez and Martha Beck, who in the late 1940s murdered a number of women whom Fernandez seduced through a correspondence matchmaking service with a view to stealing their savings, The Honeymoon Killers is a unique film in many ways – at least, I don’t think I’ve ever seen another quite like it.

Shot in stark, documentary-style black-and-white, on a paltry budget of $150,000, this was the first film to be made by its stars Tony Lo Bianco and Shirley Stoler, all of whose previous acting experience had been confined to the stage; the first to be produced by television current affairs programme-maker Warren Steibel; the first to be written and directed by Steibel’s friend Leonard Kastle, who was actually a composer by profession; and the first to be shot by cinematographer Oliver Wood. In fact, Kastle was the third choice as director – the first was a young Martin Scorsese, just starting out on his career, who was fired by Steibel for working too slowly, although the small amount of material he oversaw was retained in the final edit. 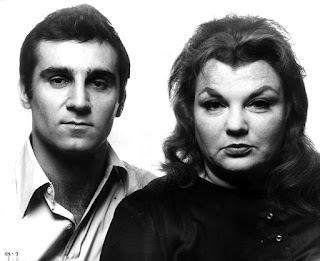 The rookie status of the film-makers and the impoverished nature of the finished production means that, at times, it almost has the look of a student film project. Apparently the actors had to do their own hair and make-up, as no professional input could be afforded for this; and another pointer to the lack of finance is that, instead of a specially-composed score, the soundtrack is comprised of sections from two Gustav Mahler symphonies – the use of which, it must be said, becomes a little over-the-top and distracting at times.

However, in spite of, or perhaps because of, its poverty row trappings, the end product is strangely effective and compelling. There is a cold brutality about the way the couple’s killings are depicted, and it is no surprise to learn that at the time of its release, it was seen as an ‘exploitation film’; indeed, it was banned in Australia until the late 1980s. Over the years, however, The Honeymoon Killers has certainly acquired plenty of admirers – famed French director Francois Truffaut once famously described it as his favourite American film – and reassessing it courtesy of this new Arrow Blu-Ray release, it is easy to see why. 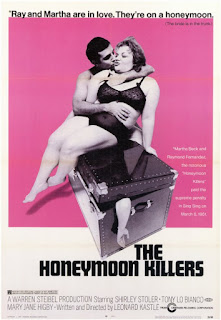 Arrow have handily packaged the Blu-Ray along with a DVD of the film (not seen for this review), making a very nice dual-format release. With a brand-new 4K restoration, the quality of the Blu-Ray picture is excellent, as is that of the original, uncompressed mono audio. There is also a generous offering of well-presented extras: