The annual FantasyCon convention was held in Nottingham over the last weekend, and as usual I was there to hopefully sell some books, but mainly to meet up with friends and have a great - if slightly drunken - time. I arrived on Friday, and after dumping the books in the Dealer Room, headed off to see what might be happening. The organisers were busy filling the delegate bags with a pile of goodies kindly donated for the event, which this year included books, fliers, a poster, a smart little CD of erotic poetry by Sam Stone (on which I am one of the readers!), and a brilliant convention magazine. The first event of the weekend for me was the Quiz which took place on the Friday night. I was hosting, asking questions posed by the devious minds of Sandy Auden, John Aitken and Gary Couzens. The questions ranged from the hard to the impossible, and, as it was International Talk Like A Pirate Day, I had to do just that for some of the time. Initially it looked as though the room would be empty as there was a book launch for Humdrumming taking place at the same time, but we eventually managed to rustle up four teams and hopefully all had a good time. 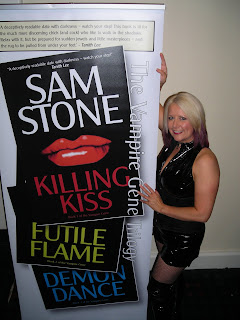 The next morning, Telos had a launch for three of the non-fiction books, and this was combined with a launch by fellow publishers Murky Depths for Killing Kiss, a novel by Sam Stone. Because of the time of day, we decided to go for a tea and coffee themed affair, with chocolate biscuits, A fair few people came along, which was great and we managed to sell a few books too! Sam Stone managed to out-glam everyone though, and her book went down very well indeed, much to the delight of Terry Martin from Murky Depths. 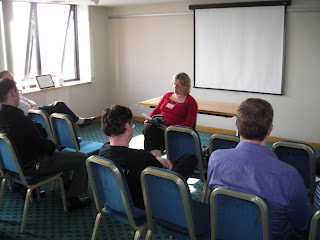 Throughout the convention there were readings in a 10th floor room, which seemed to attract a fair few attendees (probably dependent on what was happening elsewhere to be honest) and among those reading was Allyson Bird, who read from her first collection Bull Running for Girls. It's a great looking book, and Allyson was delighted to sell out of copies over the weekend, proving that the short story is as popular as ever. I was on a Doctor Who panel with friends Rob Shearman, Mark Morris, Simon Guerrier and Simon Clark and we had a great time, but barely scratched the surface of the subject. The audience seemed pleased though and it was great to chat about Telos' novellas and about the whole Doctor Who phenomenon. 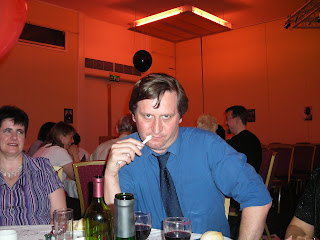 Saturday evening was the BFS Awards Banquet and we all got dressed up to the nines. The food was passable, and there were strange squidgy rubber body parts scattered all over the tables which was interesting! After the Banquet the BFS Awards were presented, and unfortunately Telos didn't win. We were only in the Novella category with Black Tide, a great zombie yarn by Del Stone Jr, but the award was taken by Conrad Williams for his excellent PS Publishing book The Scalding Rooms. 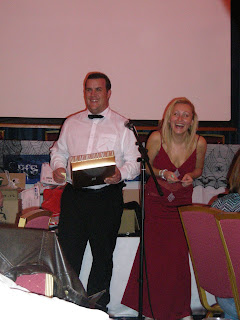 After the Awards came the Raffle. This is almost legendary in BFS circles and can be entertaining and enlivening, but it can also be dry as dust. Thankfully hosts Guy Adams and Sarah Pinborough were lively and engaging and it passed the time nicely. There were books galore, signed copies sometimes, proofs, a corset(!), artwork, goodie bags from the BBC, DVDs and lots more besides. I didn't win a thing of course ... but then that's usual with me no matter how many tickets I buy. The Raffle ended at around midnight when, despite the lure of Dave McKean film shows, I couldn't stay awake any longer and so crashed! 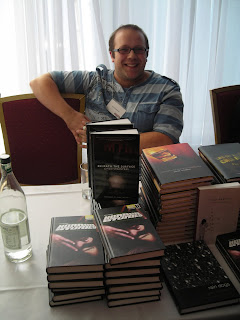 Sunday and things slowly slid down to a quiet close. I was on a panel about organising conventions which was interesting, and then there was a Small Press Launch which seemed to go well and brought the convention to a close. Overall it was an enjoyable affair, enlivened by much alcohol and bonhomie. FantasyCon is always a very friendly event, and it was good to make some new friends this year as well as catching up with people I'd not seen for a year! Here's to next year ...
Posted by David at 6:44 pm 4 comments: