Doctor Who at Earl's Court

After too many years, London is again host to a Doctor Who Exhibition ... this time at the Museum Hall at Earl's Court. I was lucky enough to be invited along for the press showing, and the exhibition itself is open from 20th March for six months.

The venue is perhaps perfect for a Who exhibit, taking up most of a basement area in the Museum Hall. This means that the items on show have room to breathe and some of the larger pieces are very nice to see indeed. I never got to see the exhibition in Manchester but the PR suggests that this one is three times the size ... it certainly is bigger than the one in Brighton a couple of years back, and as we now have three series of new Who to display items from, it's good to see them assembled in one place.

You enter the exhibition down a flight of stairs, and then along a long and wide corridor lined with photographs of past Doctors, giving a nice nod to the history of the show. From there, it's into the exhibits themselves, and they follow the new series almost in order, starting with Series One. 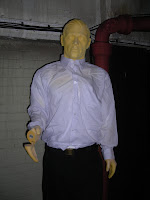 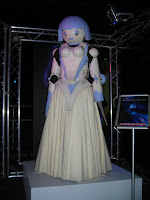 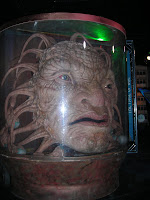 First up then, are the Autons from Rose, and these are displayed in an area made to look similar to the under-store area in which Rose Tyler first encounters them. In a nice touch, some of the manniquins move, and one at the end has a drop-down hand. It's all suitably spooky and well done.

Next up is an area with a TARDIS prop and a blank-faced Doctor onto which a moving image of David Tennant's face is projected to give the impression that he is speaking to you. If you can stand in the right place, this is quite effective, but from the wrong angle it just looks weird!

The End of the World is next, and here we have just two of the characters from that story: one of the diminutive blue-faced helpers, and two of the guests at the party. Rose's costume is also here, and just around the corner is one of the robots from Bad Wolf - Zu-Zanna. Next is the big 'ol Face of Boe in all his impressive glory, and in the same area, a menacing Slitheen and the destroyed St Stephen's Clock Tower model from Aliens of London/World War Three and the model of Cardiff from Boom Town.

Finally in this area for Series One, there is a Clockwork Santa Claus and the Sycorax Leader from The Christmas Invasion. Hmmm ... so nothing from The Unquiet Dead, Dalek, The Long Game, Father's Day, The Empty Child, The Doctor Dances or The Parting of the Ways. Well ... not quite true as there are smaller displays with some items from some of these stories dotted around, as well as some costumes later on (there's Captain Jack's costume at least) - I spotted a gas mask from The Empty Child for example, and some pieces of equipment from The Long Game. With the space available though, it's a shame that there couldn't have been some scenarios from these stories. I guess the budget only stretches so far, and my imagination conjuring up images of a spooky WWII London Street with air-raid sounds and silent gasmasked zombies dotted around, or a corridor, from the ceiling of which a Jagrafess suddenly lunges, are not achievable ... 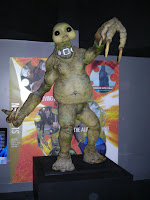 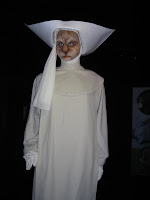 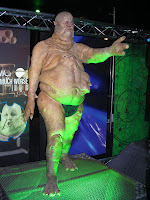 Moving onto the Series Two area, and first off are Cat Nuns from New Earth along with a costume for one of the infected humans. Cassandra is also here in bouncy trampoline form, along with the Abzorbaloff (a really nice piece of sculpture here) from Love and Monsters.

The next area is devoted to the FX development of an Ood, and is a nice sequence of sculptures and development of the mask, with a short video of designer Neill Gorton talking about it. There's a couple of 'heads' of the Doctor's ageing prosthetics on display, all finished off with, strangely, one of the Forest of Cheem from The End of the World from Series One.

It's then onto The Runaway Bride and the very impressive Empress of the Racnoss model. This giant spider is a brilliant prop and dominates the area in which it is displayed. Also here is another robot Santa and one of the unmasked roboforms from the story. Donna's wedding dress is likewise on display.

Around the corner is the large telescope from Tooth and Claw - another massive prop - the small Koh-i-noor Diamond and the costumes for the Host and Queen Victoria. More Ood are next, nicely displayed in a section of Sanctuary Base from The Satan Pit. K9 is here from School Reunion, looking as perky as ever, and also a small display of some of the art from Fear Her. We have Rose's costume from The Idiot's Lantern, and a nice display of the transmitter mask. Across from this there is a beautiful black Clockwork Man and the dissecting table from The Girl in the Fireplace. 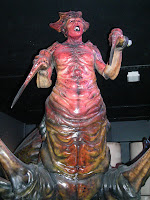 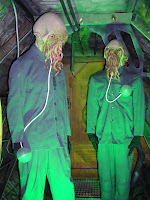 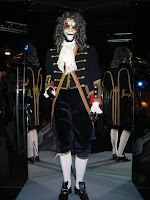 That brings to an end the Series Two area ... so nothing as yet from the Cybermen story, Age of Steel/Rise of the Cybermen or the series finale Army of Ghosts/Doomsday. But then the Cybermen and Daleks have been held back for the moment ...

Just before entering the Cyber-Area, there's a Scarecrow from Human Nature, and then it's into the realm of the Cybermen.

I have to say that this was a little disappointing. There is the Cyber Controller from Rise of the Cybermen in his chair displayed nicely (and a large button which seems to do nothing at this stage), but then there's just two other Cybermen on display. Where are the machines to make more Cybermen? You walk into the area through some clear plastic strips ... but why not make a Cybermaze out of opaque plastic sheeting and have more Cybermen, converted humans and so on displayed in a more spooky setting?

There's a single statue of an Angel from Blink in a darkened corridor area ... nicely lit with flashing lights, but another slightly disappointing scenario as this could have been handled with more statues (maybe four of them) and perhaps even a clever bit of mirror-work where one could appear serene, but switch to attacking at the blink of an eye ...

There's a couple of costumes from the Futurekind from Utopia next, and a little scenario from The Shakespeare Code - again disappointing. A solitary rather frazzled looking witch with a cauldron and the pub sign ...

From Human Nature there are costumes for Martha and the Doctor, and also the Master's costume from Utopia. There's a strange hanging-in-mid-air spacesuited Doctor from 42, and then the Emperor Dalek from The Parting of the Ways ... leading to the Dalek section.

This is very nicely done. A scenario of black Dalek Sec in the middle with two moving gold Daleks either side which acts out a little playlet in a smokey destroyed room ... quite engrossing and a lovely idea. Beyond this area are displays of more Daleks, a Pig Slave, one of the dancer costumes from Daleks in Manhattan, and one of the parallel earth fighters from Doomsday.

Then, in the final area can be found items from Voyage of the Damned. Two Host and Max Capricorn's machine, plus Kylie's waitress costume and a model of Bannakaffalata in costume. After this comes the ubiquitous shop ... 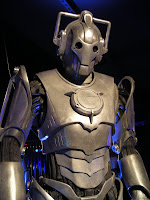 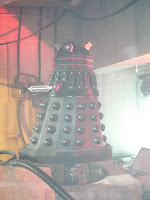 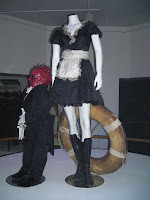 So from Series Three, nothing from Smith and Jones (where were the Judoon?), Gridlock, The Lazarus Experiment, The Sound of Drums and Last of the Timelords. I didn't see a Toclafane anywhere!

As I mentioned, there are 'BBC Props' boxes dotted throughout the exhibition which contained all manner of small props and items from stories, and the whole area is liberally 'illustrated' with graphics, photographs and information, so that, even if there seems to be nothing obvious from a given story, there probably is something somewhere from it. There is certainly lots to look at and absorb as you move through the rooms and areas.

The obvious ommission however were the Judoon - it would have been lovely to have seen some of them there, and also more on the Cybermen. Some of the areas had a lovely feel to them, emulating the television story, but others seemed somewhat soulless, with no effort to create an atmosphere around them. There are supposed to be some Series Four items added in as the Season is transmitted on television, so I guess that some items will be moved around to make space for them as that happens.

The whole exhibition is well lit with strobes, coloured and moving lights. In some cases this makes photography near impossible - the Screaming Angel statue for example is very hard to get a good picture of! However it all adds to the atmosphere. There are some nice touches for younger visitors - there's an area where you put your hand into a series of holes to feel something inside, and then try and guess what it is before lifting the lid to check. And at the end there's a place to make rubbings of TARDIS shapes which could perhaps be developed further.

I do wonder though whether some opportunities to make the exhibits more interactive have been missed. There are some buttons around which make the displays do things - one operates K9 for example, another makes a Dalek talk - but maybe there could have been quieter, more scary areas, like the aforementioned Cyberman area which could have been a maze of hanging plastic with lights and silhouettes before you come face to face with the Cybermen themselves. The Dalek area is great though and could have been extended with a similar theme running through it. I can, however, see this being a bottleneck with people moving through, as you just have to stop and watch and admire.

I suppose for me, the 'ultimate' Doctor Who exhibition has yet to be mounted ... a mixture of costumes, information and props, mixed in with interactive areas (perhaps even with actors to help keep the people moving through and interest high) and with each 'area' having the appropriate 'feel' and setting of the story in question. I went to The London Dungeon a year or so back, and this has some elements I feel would translate well to a Doctor Who exhbition. However it does need staff to help guide the visitors through, and this obviously costs more to stage and keep running. Maybe at some point we will see something along these lines.

Overall then, this is a great set of displays of items from the last three (and soon to be four) years. There is an awful lot to see here, and a lot of thought has gone into the layout and presentation of everything, with video screens, lighting and information boards making it a very attractive and enticing place to visit. Full marks to everyone involved, and I hope that many people come and visit over the summer, refreshing their memories of Doctor Who, and increasing anticipation and enthusiasm for the show as it transmits.