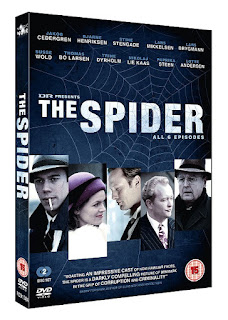 The six hour-long episodes of the Danish TV serial The Spider (original title Edderkoppen) were released as an English-subtitled two-disc DVD set in the UK last summer, fifteen years after their original broadcast, as part of Arrow Films’ “Nordic Noir” strand of crime dramas. Unlike more famous Danish shows such as Borgen and The Killing (with which it shares a number of principal cast members), The Spider is not a contemporary thriller but a period piece, set in 1949, a time when Denmark was still suffering the after-effects of the Second World War, with many everyday items still subject to rationing. The central character, Bjarne Madsen (Jakob Cedergren), is an idealistic rookie journalist on a left-wing newspaper, who becomes preoccupied with investigating a local ring of black marketeers presided over by the ruthless Svend Aage Hjalmar (Bjarne Henriksen) – “the Spider” at the centre of this web of crime. Bjarne is aided by veteran crime reporter H C Vissing (Bent Vejding), who takes him under his wing, but they find their enquiries obstructed at every turn by corrupt police officers, who are in the pay of Hjalmar.

Partly based on true events, the story is set against the background of a nation struggling to come to terms with its wartime past, when some people joined the resistance to oppose the Nazi occupying force, while others became despised collaborators, creating tension within local communities and even individual families, as shown when Bjarne’s cocky collaborator brother Ole (Lars Mikkelsen) – curiously named after the series’ creator, director and main writer Ole Christian Madsen – returns from a period of effective exile in New York with a wad of cash, intending to set up a jazz club. 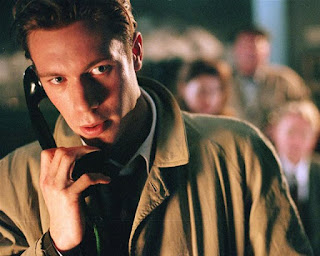 This is a very well-made serial, with strong central performances, high production values and good direction, creating a very authentic-seeming period atmosphere. Unfortunately, it is really let down by its scripting. The characters are clichéd and one-dimensional, the situations hackneyed and predictable, and the plotting disjointed and implausible. The end result is that, although The Spider has an interesting setting and an intriguing premise and is very pleasing to look at, sitting through all six episodes becomes really rather a trial.

Arrow Films’ DVD presentation of the serial is a bare-bones one, too, with no extras whatsoever. So, overall, this is sadly not a release I can recommend. 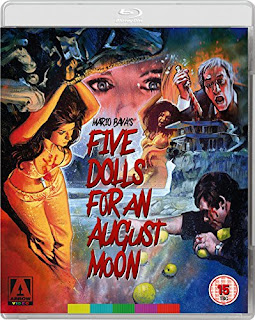 So this is a Mario Bava film, and one that I'd never heard of. The director is famed of course, and rightly so, for such masterworks as Black Sunday, but it seems that somewhere after that he lost his mojo.

I have no idea why this film is called Five Dolls for an August Moon. There are no dolls in the film, and no moon either, and it may or may not be set in August. What it seems to be is a sort of rip-off of Agatha Christie's Ten Little Indians, or And Then There Were None, in that there are ten people, five men and five women, on an island, and that they get killed off one by one ... no-one seems to know who the killer is, not least of all the viewer, and to be honest the film is so talky and slow that the viewer actually ceases to care much ... And when we get to the end, it doesn't make sense anyway, with people seemingly vanishing when the police arrive and then reappearing again ... and the police search the house - by which they go to the top of the stairs and without moving a foot further, or calling out, or checking any of the rooms, declare that the place is deserted. It's all very strange. One of the woman is a sort of 'observer' type character and runs around outside in a short dress or fetching pair of jeans, acting strange, hiding clothes in rocks, eating seafood straight from the water ... that sort of thing. The others are a strange mix of poorly acted Italian stock, looking as though they have just wandered in from whichever Italian Soap Opera was popular at the time ... It's all spinning beds and girls in knickers ... very soft porn stuff.  There is one nice death reveal - where a load of glass balls tumble down a staircase and roll along a passage to a bathroom, falling in the bath where one of the girls seems to have slit her wrists because she can't take it any longer ... I know how she felt!

And the music! Oh my. It sounds as though it's all been played on a Bontempi organ and is dreadful. There's a meat locker in the house (inexplicable) and for some reason all the dead bodies get wrapped in plastic and hung in there. 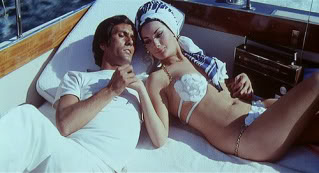 While I can applaud Arrow for seeking out, cleaning up and issuing all these strange films in high quality Blu-Ray format, it's a shame when the subject matter is as poor as this.

There is an interesting and informative documentary on the disc (apparently from around 2000) where Mark Kermode explores the life and work of Bava. Of particular interest were the parallels between Bava's Planet of the Vampires and Scott's Alien ... where it seems that if Ridley Scott hadn't seen Bava's work, then the writers certainly had ... there are a lot of parallels.

So overall, it's a lovely transfer, clean pictures, incomprehensible film and dreadful music ... Probably unmissable for the Bava completist! 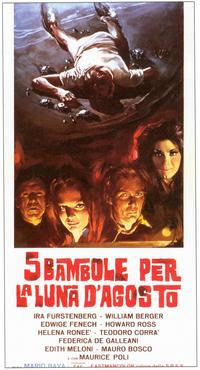