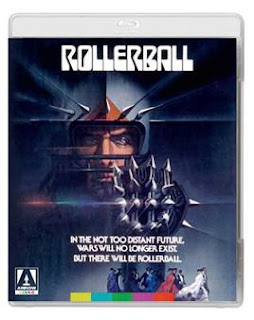 Rollerball is one of those iconic films from the seventies ... something that most people have heard of, even if they haven't seen. And now Arrow Video have a lovely new remastered DVD and Blu-Ray release to remind everyone of this minor classic.

The overall plot is pretty simple. It's the future (well a future as envisaged in the 1970s, so all chrome and 'futuristic' design), and the populace enjoy an entertainment called Rollerball - in which two teams compete to score points by getting the 'Rollerball' - a silver metal sphere - into a net. But both teams are on rollerblades and ride motorbikes and circle an arena. The Rollerball is shot around the arena at speed, making it le

thal if it hits you, and anything seems to go in the game. Players can barge and attack each other, knocking them over and into the path of the ball, and fatalities are expected. However there is a deeper theme at play, one of the futility of individual effort. The game is designed to keep the populace subdued by showing that you have to work as a team to win - the individual means nothing. However, in terms of the film,James Caan is playing an individual, Jonathan, who is determined to succeed, even when corporate 'powers' want him to fail, bribing him with the return of his wife. The film ends with Caan becoming a hero, the opposite of what the corporation wanted. 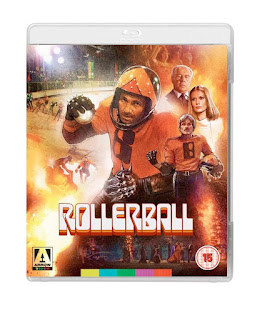 It's a very impressive film in many ways. Visually rich and splendid, the futuristic trappings are well done. It opens in a very documentary way, showing the game as though it were a sports reporting programme, with cinema veretie trappings and realism seeping from every pore. As we progress, the film starts to show its age with some incredibly slow sequences containing lots of talk. I guess these are adding the character into Caan and his struggle with the all powerful corporation, but with today's eyes, these drag the film down, and you can't wait to get back into the Rollerball ring for more action. Perhaps this was the point.

The transfer and presentation of the film is excellent, with the colours rich and sharp and the picture quality brilliantly presented. Caan is superb in the lead, and it was good to spot John Hausman with his very distinctive voice as the representative of the corporation.

As with all the Arrow releases. it comes with a great selection of extras:

Killer’s Kiss and The Killing were two of the very earliest movies to be written and directed by future screen legend Stanley Kubrick, both of them in the film noir style that was nearing the end of its classic period by the time of their release in the mid-1950s. 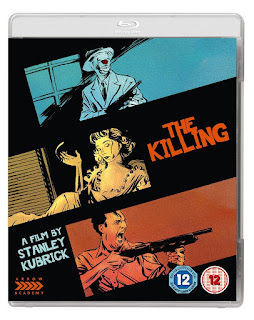 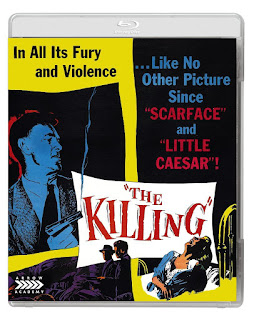 The Killing is the more acclaimed, well-known and influential of the two productions – it was an important touchstone for Quentin Tarantino’s Reservoir Dogs (1992) for instance – and is presented as the main feature on this recent Arrow Blu-ray release, with Killer’s Kiss relegated to the status of an extra. Although Kubrick took sole on-screen credit for The Killing’s excellent screenplay, its dialogue was actually written by noir fiction icon Jim Thompson (The Killer Inside Me, A Hell of a Woman, After Dark, My Sweet, The Getaway, The Grifters etc), and it was based on a novel, Clean Break (1955), by another accomplished noir author, Lionel White. However, in terms of both storyline and presentation, The Killing has a lot in common with Robert Siodmak’s similarly-titled The Killers (1946) – the Arrow Blu-ray release of which I guest-reviewed for this blog a few months ago – and it seems likely that this was also a significant source of inspiration.

Like The Killers, The Killing centres around a heist plot – in this case, involving the theft of racetrack betting money – and is told by way of a series of out-of-sequence flashbacks, through which the viewer has to piece together the action almost in the manner of a jigsaw puzzle. These are classic film noir ingredients and techniques; and Kubrick reinforced the movie’s noir credentials by casting in prominent supporting roles two of the genre’s most recognisable stalwarts – and, as it happens, two of my favourite actors – Marie Windsor and Elisha Cook Jnr, both arguably a little past their prime by this point. Windsor plays a typical brassy femme fatale and Cook her milksop husband, and their bickering interplay is, for me, one of the great highlights of this movie.
Other earlier heist movies often said to have influenced The Killing are John Huston’s The Asphalt Jungle (1950) and Jules Dassin’s Rififi (1955). The most obvious parallel with The Asphalt Jungle is that both movies star Sterling Hayden as the boss of the criminal gang, giving near-identical performances in near-identical roles; and Kubrick’s taut, documentary-style shooting of The Killing’s racetrack heist certainly recalls Rififi’s famously tense 30-minute dialogue-free sequence depicting in almost forensic detail the carrying out of a jewel robbery.
Often rated as one of the greatest crime movies ever made, The Killing is one that no fan of the genre can afford to have missing from their collection. That said, though, and at the risk of courting considerable controversy, I have to confess that, in my eyes, Killer’s Kiss is actually the better and more interesting of these two early Kubrick works.

While some film noir aficionados might consider this heresy, the advantages Killer’s Kiss has over The Killing are, for me, twofold. First, it tells a smaller-scale, more intimate story, which is altogether more emotionally involving than The Killing’s rather cold, clinical approach. Likewise structured in a series of flashbacks, it tells of a burgeoning romance between washed-up boxer Davey Gordon (Jamie Smith) and his neighbour Gloria Price (Irene Kane), who works as a dancer in a seedy dime-a-dance joint – a kind of more chaste 1950s equivalent of today’s lap-dancing club. The challenge with which they have to contend is not The Killing’s logistics of planning a perfect robbery, but simply how to avoid the attentions of Gloria’s lecherous boss Vincent Rapallo (Frank Silvera), who is strongly implied to have raped her and has then dispatched two thugs to murder Davey. The only false-seeming note in this gripping narrative is its rather incongruous happy ending, and it is no great surprise to learn that this was added in a reshoot at the behest of studio United Artists, who stumped up the majority of the movie’s modest budget.

The other great merit of Killer’s Kiss is Kubrick’s fantastic direction, which is even more gripping and inventive than in The Killing, making brilliant use of extensive location shooting in New York, including in the run-down streets and alleyways of the Brooklyn waterfront and Soho areas. Some of these sequences – such as a desperate fight between Davey and Rapallo in a warehouse storing shop window mannequins – are incredibly striking and memorable, and benefit from some very unusual and effective camera angles made possible by Kubrick’s decision to dispense with on-location microphones and dub all the dialogue and sound effects in post-production.

All in all, Killer’s Kiss is an underappreciated gem of a movie – and one that, unlike The Killing, is likely to be a previously undiscovered one to many of this Blu-ray’s purchasers.

Arrow have again done a fine job with this Blu-ray release. The high-definition transfers of both The Killing and Killer’s Kiss are the same ones that formed the basis of the Connoisseur Collection’s acclaimed equivalent Region A disc, and are excellent. There is also a strong package of added extras, including:

Stephen James Walker
Posted by David at 12:30 pm No comments: