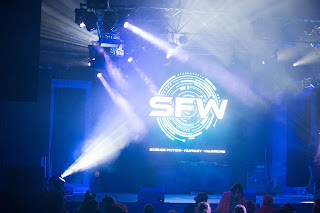 I've not been posting quite as much here of late ... mainly because I've been busy on several projects, and with several other real-world things also taking up my time!  But with the SciFi Weekender 8 event now past, I can finally find some time to blog!

So what is SciFi Weekender?  I have been asked that on several occasions ... is it like a ComicCon people ask ... or is it like a Festival?  A little of both, but not quite like either is the correct answer. The best way to describe it is as a weekend-long party at which everyone can geek out over whatever their Science Fiction, Fantasy or Horror passion is ... there's lots of partying ... live music and cabaret acts and dancing in the evenings (and sometimes during the day too) ... lots of genre guests from film and television ... artists guests from the comics ... author guests who pen the literature that people like to read ... and cosplay ... lots of cosplay ... It really is a weekend experience like no other!

For me, the journey to SFW has been fascinating indeed. Sam and I started to get involved several years back now, when we were guests of the event, and since then we have helped with the author track, helped with the other guests ... and then from last year, Telos Publishing became a co-sponsor of the event, along with Chic Festivals, Area 51 and Sci-Fi London ... so we were even more involved in the organisation.

For this year, I ended up scheduling the whole event and creating the programme which was given out to everyone. This was a year's worth of effort and planning ... helping to get the guests on board, the authors, liasing with Matt from Area 51 and Jonni from Chic to pin everything down ... Matt also did the final, spectacular design of the programme booklet and the end result, after months of work, was hopefully a guide to the whole event, allowing attendees to plan their own Weekender experience.  It seems to have gone down well too, which is very gratifying.

We also arranged the author track, with top names Darren Shan, Simon Morden, Justina Robson, Freda Warrington, Steve Lockley, Paul Lewis and of course Sam Stone all appearing to talk and sign books.  We were based at 'Author Central' in the Spaceport arena, and hosted signings there. Greatest thanks to Mick, Tracey and Caitlin Herod for helping out on the stall ... Sam and I were so busy over the weekend that we were only able to make fleeting appearances there ourselves!

The only downside to the weekend was the weather! We arrived on Wednesday in torrential rain which didn't let up until Friday morning ... the place was flooded! Wet and muddy, great pools of water everywhere, and you got soaked every time you went out!  But there's not much we can do about that unfortunately!

The weekend kicked off on Thursday with a couple of introductory panels, which seemed to go well, and then in the evening, we were treated to the band Jericho Rose who performed a brilliant 45 minute set. They are Manchester based, and their lead singer is Linzi Gold, Sam's daughter, who also sung at last year's Weekender ... They also nailed two covers: 'She Sells Sanctuary' and 'I Believe In A Thing Called Love' ...

This was followed by SFW Allstars ... a different vibe before the DJ, in which Daphne Ashbrook, Sam Stone, Linzi Gold and Yee Jee Tso sung, and Frazer Hines compered (and I did a little comic shtick with Frazer). Again this seemed to be well received ... and so we collapsed off to bed (well, to the cabin and wine and brandy before bed).

Friday and the first full day ... I moderated a panel in the morning with the Who Companions ... and then spent a lot of time dashing between the Spaceport and Timeport arenas for various reasons ... We did a little 'Opening the Tomb' sketch as I had arranged for the set from the Doctor who 'The Tomb of the Cybermen' to be there thanks to it's builder Sam Rendell, who had also arranged for a Cyberlegion to be present ... so I penned a couple of little sketches for Frazer, Wendy, Peter, and then Frazer, Daphne and Yee Jee to perform ...  Unfortunately Wendy Padbury was unable to attend due to sickness, so Linzi Gold stood in!

These went well I felt, with smoke and music and Cybermen emerging from the Tombs ... One attendee told me that this brought goosebumps up and threw him back to hiding behind the sofa watching it on television ...

We had a launch party for Telos' new books on the Friday with free wine ... it all went down well but I was a little disappointed at the turn out. We were launching titles by Freda Warrington, Paul Lewis, Sam Stone, and a special 'Tales from the Weekend' book of stories from all the attending authors.  Luckily sales at the table were good over the weekend, making up for the slightly small launch!  But this did mean that we had lots of wine left over to drink ourselves!

Saturday night we didn't get to see anything!  We were so tired after the day that after we had eaten we just crashed back at the cabin ...  At least this meant we got a little sleep!

And Saturday dawned bright and early ... with some much needed sunshine ... and the Cosplayers were out in force having been denied the opportunity due to the awful weather beforehand.

I managed to be late for my own panel in Starbucks!  Which amused me ... but my excuse is that I was over in the Owners Lounge for the Trooper Meet n Greet and got back late!  We had another Tomb Opening, and then there was the Just a Minute gameshow on Main Void!  Linzi Gold again stood in for Wendy Padbury, and we had a lively time with dance-offs, Joker interruptions, misunderstandings and laughter ... I hope everyone enjoyed it!

Then it was dinner and finally over to the Main Void to socialise, listening to 'The Dark Room' presentation, before Pat Sharp took to the decks to take us into the night ...

So exhausted and happy, I managed to not see much of anything that I wasn't directly on stage for ... I did manage to see Sam interviewing Nicholas Brendon, and the 'surprise' Buffy singalong afterwards ... It was great to very briefly catch up with Gareth Lloyd Jones, Professor Elemental, Chris Cross and Jimmy Vee, and to chat with the awesome Darren Shan and our other authors.

Unfortunately Justina Robson had a family emergency in the middle of the event and so had to excuse herself from Saturday's activities ... and we lost Phil Ford and Wendy Padbury to illness before the event started ...  But none the less we all had a great time.

I collected a lot of feedback from attendees over the course of the weekend, and this will all be fed into the mill for next time ... when, if at all possible, we want to make the Weekender even bigger and better!