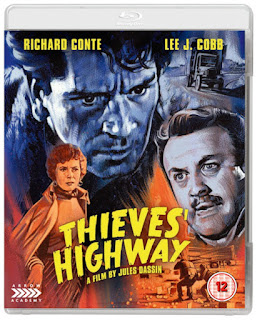 The late-era film noir Thieves’ Highway is held in high regard by many fans of the genre, but its great reputation is – in this reviewer’s opinion – not entirely deserved.

The main problem with the movie lies in its scripting, and more particularly its characterisation. The story centres around war veteran Nick Garcos (Richard Conte), who returns home to the States to find that his truck-driver father has lost both of his legs in an accident arranged by unscrupulous San Francisco market trader Mike Figlia (Lee J Cobb) as part of a scheme to avoid paying him for a consignment of tomatoes. Joining forces with a deceitful former associate of his father’s, Nick drives to the city with a truckload of prized Golden Delicious apples, seemingly intent on using this as a pretext to make contact with Figlia and exact revenge on him. So far, so good. However, it appears that, on arriving in San Francisco, Nick promptly forgets all about his revenge motive after he manages to get Figlia to pay him a good price for the apples – despite having foolishly abandoned his truck right outside the man’s market stall, predictably prompting him to help himself to the produce. Then, in a moment of jaw-dropping idiocy, Nick uses a public phone in a crowded café to call his girlfriend Polly (Barbara Lawrence) and brag about how much money he has made, while everyone present listens in. It is no great surprise that, when he later goes for a stroll along a deserted waterfront, he is attacked and robbed – although it eventually transpires that the culprits are two men sent by Figlia to get his money back. In the meantime, while waiting for Polly to arrive in San Francisco so that they can get married, Nick has started an affair with an Italian prostitute, Rica (Valentina Cortesa), despite knowing that Figlia has paid her to keep him occupied. (Honest, I’m not making this up.) Small wonder that when Polly does arrive, she is none too impressed to find Nick lying on Rica’s bed – although it is only on learning that he has lost all of his money that she immediately gives up on him and leaves! And so the plot staggers on, from one improbable development to another … 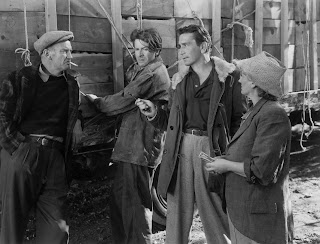 In many classic film noirs, the protagonist is dogged by fate at every turn, but in Thieves’ Highway, the misfortunes that Nick suffers are really all the result of his own stupidity – or, at best, unbelievable naivety – which is nowhere near as satisfying. It is only after Nick himself has been repeatedly scammed by Figlia that he apparently remembers why he came to San Francisco in the first place, and physically attacks the man – until, that is, some police officers turn up to deliver the patronising moral that people can’t take the law into their own hands, so Nick should really have left it all to them. Nick then hooks up with Rica, and they drive off into the sunset together in his truck …
To be fair to the movie’s esteemed director Jules Dassin (also responsible for such classics as The Naked City and Rififi), the moralising police officers and the implausible ‘happy ending’ for Nick and Rica were late additions made by the studio, 20th Century Fox, without his agreement. Where Thieves’ Highway does succeed admirably is in the visual flair that Dassin brings to it, and in its authentic depiction of the lives of the truckers and market traders involved in the Californian fruit and veg trade – an unusual but interesting background for a movie. The outdoor fruit market scenes shot on location in San Francisco’s Oakland Produce Market area are especially effective, with a number of real-life market traders being used as extras; and there are some memorably dramatic incidents on the road as the truckers make the long, tiring journey to San Francisco. In the end, though, the shortcomings with the script really let the whole thing down.

Arrow’s recent Blu-ray release of the movie – which is handily presented in a dual-format package with a DVD (not seen for this review) and a well-designed booklet with an essay by critic Alastair Phillips and some nice stills – has immaculate picture and sound quality, courtesy of an excellent new 4K digital restoration by 20th Century Fox. A good collection of extras include The Long Haul of A I Bezzerides, a 55-minute documentary portrait of the man who wrote both the movie and its source novel, Thieves’ Market; another new documentary, The Fruits of Labour, in which film noir expert Frank Krutnik, author of the excellent book In a Lonely Street: Film Noir, Genre, Masculinity, discusses the movie’s genesis, production, reception and politics; selected scene and character commentaries by Krutnik; and the theatrical trailer.

Review by Stephen James Walker
Posted by David at 10:58 am No comments: