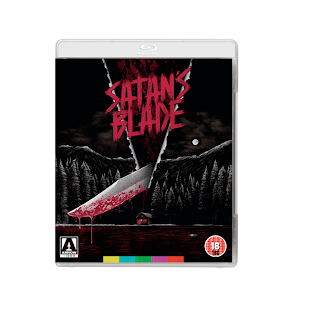 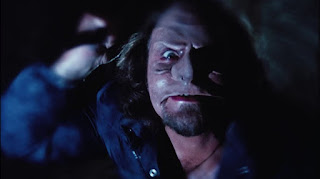 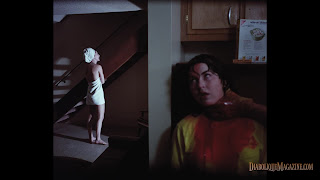 Review: Return of the Killer Tomatoes (1988) 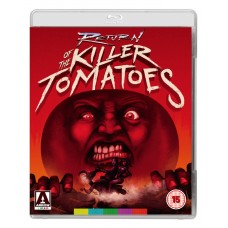 This is a great little film! And one which I'd not seen before. I've not even seen the original Killer Tomatoes film, so had no preconceptions as to what this might all be about. But as sequels go, this is pretty enjoyable and well done fare. It's streets above other 'so bad they're good' type films, and I'd almost go so far to say that this is 'so good it's good'!

The basic plot is that there's a mad scientist, Professor Gangreen superbly played by John Astin (the original Gomez Addams), who has discovered a way to turn tomatoes into people. So he has created Rambo-esque guards for his house, and also a hot female assistant (Karen Mistal). In fact she is so hot she's steaming! Except that said assistant falls for one of the lads from the local high school, and he and his mate (played by a young George Clooney) decide to try and liberate her ... 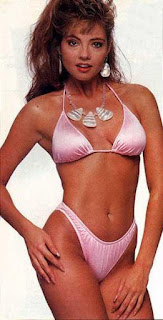 It's generally a nonsensical romp of a film, with some brilliant '80s moments. I love how it starts as a beach movie, with a whole bevvy of unfeasibly hot babes in bikinis, and then moves into sideswipes at consumerism as they try product placement of all types to try and get enough money to finish the film ...  Tomatoes are bad as well and are smuggled in, while people run around screaming if there is even a hint of tomato! Chad (Anthony Starke) and Matt (George Clooney) work in a pizza place and pizzas are made with every ingredient but tomato as well - strawberry jam being one such replacement, and the whole film is silly and yet compelling.

As mentioned, I was somewhat entranced by Karen Mistal who plays Tara Boumdeay (Professor Gangreen's assistant). She is stunning and with a body ... what a body ... The '80s fashions really work to her advantage in this regard. We even get a return of the bikini girls at the end as Matt uses the Professor's machine to create some hot girlfriends for himself. 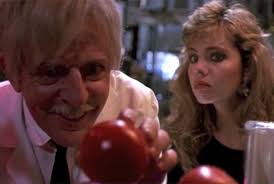 I loved the film. I liked the sense of self-awareness that it has, the breaking of the fourth wall, the insanity of the plot, and the gorgeous girls of course. For the ladies, there is of course George Clooney, and another assistant of the Professor called Igor, who is a handsome blond chap with a very educated speaking voice (Steve Lundquist).

It reminded me a lot of the more recent Sharkanado movies, with the same sense of the absurd and rollicking fun which they embody.

My one disappointment here is in the extras on this new Blu-Ray release from Arrow. Usually Arrow stuff their disks with tons of material, but here there's only a recent interview with Anthony Starke to round it off (there's a trailer and a couple of other minor elements, but no documentary or behind the scenes information. Ah well.

Worth getting to watch with your mates on a beer and pizza night. Just watch out for the tomatoes! 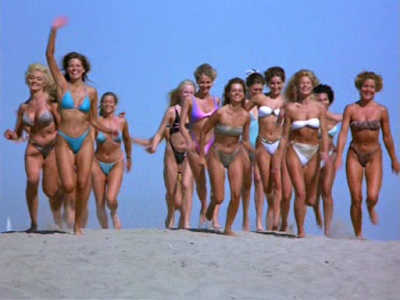 I love short stories ... they're great in collections, and anthologies, and the very best make you think and feel emotions ... they can also be experimental in a way that might be tricky at a longer length, but they can also be varied and range from funny to horrific to gut-wrenching, to sad ... there really is no limit!

No surprise then that some of my favourite television is in the 'Short Story' field. Anthology series which take a the form of stand-alone tales of terror (or science fiction). Among such series in the past have been Out of the Unknown, The Twilight Zone, The Outer Limits, The Hunger, Tales of the Unexpected and Urban Gothic. All of them presented some great material during their runs, and all managed to make the most of what modest budgets they had available.

Unfortunately, in more recent years, this sort of Anthology series has all but vanished. All people seem to want are character-driven series with season arcs and cliffhanger endings to each season ... the idea of telling discrete stories each week doesn't exist. There was Black Mirror of course which took a more political slant on the genre, but it's hard to think of any others. 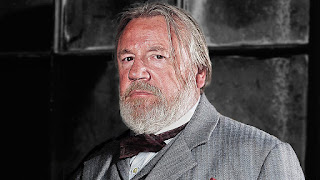 Which is why I was excited to see, first, a little series of films based on the work of H G Wells - The Nightmare Worlds of H G Wells, and, more recently, four of Neil Gaiman's short stories presented in similar fashion. I suppose one could also include here Mark Gatiss' brilliant M R James adaptation of The Tractate Middoth from a couple of Christmasses ago ...

The H G Wells stories were an interesting bunch, and I have to admit to not being very familiar with his short works. From what was presented, I got the feeling that they struggled to find ones which were actually adaptable to television. The themes seemed a little muddled in each, and the outcomes very obvious. I liked a lot the one about the old man who 'jumps' into the body of a younger man as he seeks immortality, and I also liked the one about the poisonous mushrooms, in which Shaun Parkes shines. 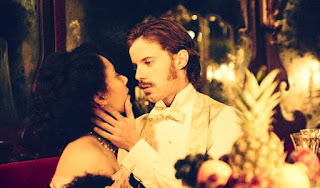 The direction of these was also well thought through, with largely black drapes taking the place of backgrounds, and the action taking place in a sort of theatre set, slightly removed from reality.  This was, presumably, a cost-saving measure, but it worked in the telling of the stories, making them slightly spiky and unreal. I'm not sure though that I could believe Ray Winstone as H G Wells. His accent being somewhat offputting, and not how I had ever imagined Mr Wells to sound (I have to admit, I have no idea what Wells' accent would have been, however!) 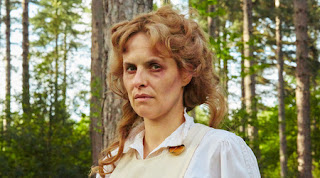 The four stories chosen were: The Late Mr Elvesham, The Devotee of Art, The Moth and The Purple Pileus.

Overall, however, I enjoyed Sky's presentation of these tales, and it was very refreshing to see proper short stories dramatised on television.

The Neil Gaiman stories were given the overall title of Likely Stories, and there were again four chosen: Foreign Parts, Feeders and Eaters, Closing Time and Looking for the Girl.

Unfortunately I was less taken with these adaptations, though for the most part they were well made and cast. I liked seeing Montserrat Lombard in every one - she's a superb actress and brings a full range of emotion (and accents) to each role. I was less enamoured with comedian Johnny Vegas telling stories in a gentleman's club though. 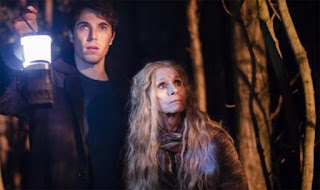 Probably the best of them was Feeders and Eaters where Lombard plays a girl waitressing in a cafe who hears stories from her clientele. One such comes from a young man who has met and is looking after an old, old woman (excellently played by Rita Tushingham) ... but she needs fresh meat to survive, and the implication, very subtly done, is that she is literally eating him alive. It's so subtle though that you could miss it - I only knew because I published Gaiman's story in one of Telos' anthologies a few years back! 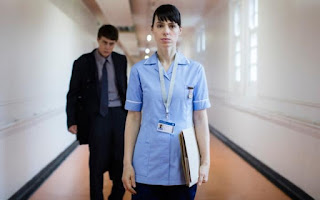 This is basically the problem with them though, there's not much story there. Gaiman is a brilliant writer and novelist, but the short stories they chose are perhaps not his best. But then I'm not the director/producer and don't know what criteria they were looking for. It's certainly true that all four are seedy and dark and dwell on the human condition ... so perhaps this was what they were aiming for. And if so, they succeeded!

Foreign Parts in particular made me feel quite grubby - it's about a venereal disease which takes over its host and makes them a better person somehow ... very strange. 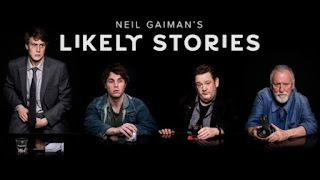 I really hope that these two series have been successful for Sky and that they are moved to widen their net and seek out more authors and more works to bring to the small screen. There is such a wealth of potential out there that it seems a shame to limit it to just two authors ...
Posted by David at 6:00 pm No comments: