A Day at the Races 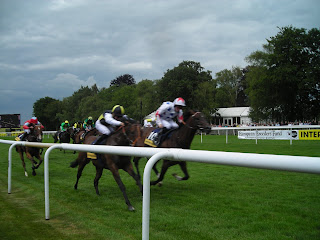 'So, David, back to the race ... how do you feel Something Perfect will do?' I'm standing on a small green, speaking with Jonno from Channel 4 Racing about a horse running in the next race to start; the 3:15 at Newmarket on Saturday the 20th June ... and I've never so much as stepped foot at a Race before! So how did this happen? Since when was I a Channel 4 pundit on the races? It all started because I was enjoying a nice weekend away with an actor friend, Frazer Hines, and we decided to spend the Saturday at Newmarket, which is where Frazer has his stud farm. So Sam, Frazer and I all roll off down to Newmarket on the Saturday. I am as green as anything, not having a clue what to expect. Sam had booked tickets for the Premier enclosure, so we finally figured out how to get in there and of course the first thing we did was get a jug of Pimms and settled down to watch the first race, and study the horses running that day. For me, it was all a case of seeing which one had the best name, but horses called things like 'TARDIS Travel' or 'Tennant's Fancy' weren't listed ... so I had no idea. Then Frazer spotted that a horse owned by a friend of his was running, so he decided to make a call ... seconds later, he's back with a big smile ... his friend's wife was there, and she had invited us into the paddock to see the horses with the other members of the Silver Lining Syndicate before the race. Now, to me, a paddock is a big straw-filled area bounded by wooden fences like you see on telly ... and I imagined we'd perhaps be sidestepping the piles of dung and trying to avoid getting trampled by these racehorses, all fired up before the race. Not at all ... the paddock is apparently a lovely big grassy area with a sort of track around it, where the grooms lead the horses next up to race, warming them up and getting them ready. So we wandered in there and stood watching the horses going around us. The horse owned by Frazer's friend was called Polly, and raced under the name 'Something Perfect' and she looked very smart. In fact, she won the 'best turned out' prize and we all applauded politely. Then the jockey arrived and we had a chat before he headed off to get on Polly to ride her down to the starting gates for the race. But Polly was having none of it. She got a little skittish and kicked out ... not at all a happy horse. The jockey hopped off and calmed her, and then led her out onto the racetrack before mounting her again and riding off to the start. 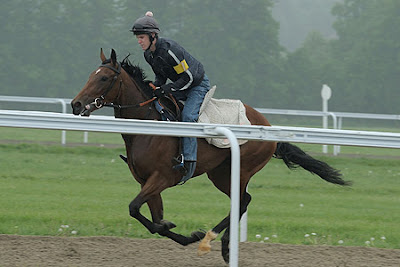 We then decided we ought to put a bet on her, after all, the syndicate which owned her had been kind to us and ... well ... you just do that sort of thing don't you. So we popped out to the betting huts and Sam put a small bet on her. I nipped to the loo, and when I emerged, Frazer was standing by a fence. 'Here he is,' says Frazer. A nice gentleman on the other side of the fence says, 'Oh yes, hello, good afternoon, I understand you write for Doctor Who?' I smile, I often get this ... 'No, not for Doctor Who, about Doctor Who. I'm a sort of historian?' 'Oh very good, come round here then ...' So I look at Frazer, slightly perplexed, and he nods and smiles, so off I trot to the other side of the barrier. There to stand next to the nice gentleman, who seems to be called Jonno. Next thing I know there's a microphone thrust under my nose with a big Channel 4 logo on it. I look up, and there's a TV camera pointing at me. Oh crikey! The questions start with some stuff about Doctor Who ... that's fine ... I can deal with those. 'I understand you've travelled all over the world with the show ...' Eh? How could he possibly have known that! So I say something about conferences taking place in LA and that it's great the show has such a global following. And then he asks me about the horse ... I couldn't remember its name ... nor even the name it raced under ... at that point I couldn't even remember if it was a boy or a girl! We had enjoyed a jug of Pimms remember. I mention that the horse seemed a little skittish, but the jockey had sorted it, and we hoped she'd do well in the race ... Then Jonno asks me who else is in the Syndicate ... erm ... um ... but you can't do that on telly can you. So I say that there's quite a few people in it, including TV actor Frazer Hines who is here today ... Jonno seems happy ... he closes the chat and we return to the studio to watch the race. I thank Jonno and return to Frazer, now joined by Sam, who are laughing their faces off. 'You have to be the biggest bulls**tter going, David,' says Frazer when he can speak. 'I'm glad they didn't ask you how the syndicate named the horse!' So was I!! As it happened, 'Something Perfect' came third in the race. Beaten by 'Cosmopolitan' in first place, and 'Penzena' in second. There was a bit of a flurry, as the jockey on 'Penzena' was apparently seen smacking 'Something Perfect' in the face with his riding crop during the race, however on playback, the officials decided it was accidental as the horses were all close together on the track ... but then as there were only 8 horses running in the race, bets only paid on the top two places ... so we were robbed! Like I said to Frazer on our way back, the races have been spoiled for me now as I think you always get to see the horses before and after the races, get to go in the owners' enclosure, drink Pimms and appear on Channel 4 ...
Posted by David at 5:08 pm 5 comments: 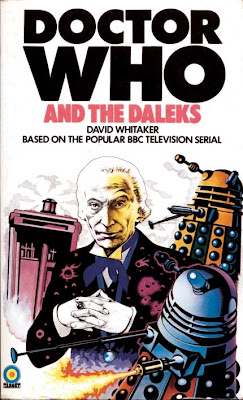 Folks might be interested to know that I'm interviewed talking about the old Doctor Who Target Books on a radio documentary being broadcast on Tuesday 23 June, from 11.30am to 12 noon. 'On the Outside it Looked Like an Old Fashioned Police Box' The PR reads as follows: "Mark Gatiss, Doctor Who writer and fanatic, presents a feature exploring the hugely popular Doctor Who novelisations of the 1970s and 80s published by Target books. In an age before DVD and video, the Target book series of Doctor Who fiction was conceived as the chance for children to 'keep' and revisit classic Doctor Who. They were marketed as such, written in a highly visual house style. Descriptive passages did the work of the TV camera; the scripts were more or less faithfully reproduced as dialogue. They were as close to the experience of watching as possible and were adored by a generation of children who grew up transfixed by the classic BBC series. Target Doctor Who books became a children's publishing phenomenon selling more than 13 million copies worldwide. From 1973 until 1994, the Target Doctor Who paperbacks were a mainstay of the publishing world. From humble beginnings they grew into a list running to 156 titles, shaping the reading habits of a generation." I've also heard that Russell T Davies, Gary Russell, Terrance Dicks, Philip Hinchcliffe, Chris Achillios, Caroline John and Anneke Wills are taking part. So give it a listen if you're around, or it should be on the BBC iPlayer afterwards.
Posted by David at 5:40 pm 2 comments: