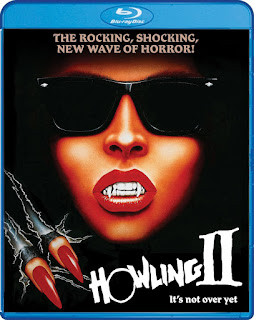 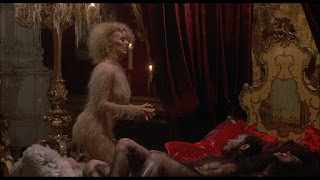 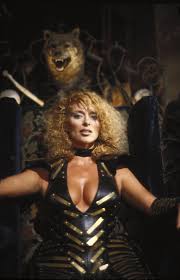 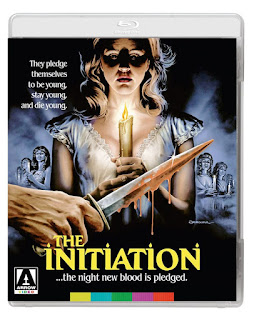 Not one of the best or most memorable of slasher films, The Initiation comes over today as something of a pale imitation of the best of the genre. It’s interesting that the same year it was released, Wes Craven’s A Nightmare on Elm Street was also released, and Craven’s film is superior in just about every way.

In The Initiation, Kelly (Daphne Zuniger) is plagued by bad dreams, caused by some trauma she suffered as a child. Not to be put off, however, she wants to become a member of her school’s sorority, and the initiation involves breaking into her dad’s department store and stealing the clothes from the security guard.

Of course things aren’t as simple as that, and when you add in some escaped prisoners from a local sanatorium, then the deaths start to add up. The main issue, from a plot perspective, is that the killings are random. No-one who dies deserved to die – this is one of the common tropes in this genre of film: usually if you are young, if you have sex, you die … but here there’s not even that tenuous morality to save you. People are bumped off left and right and the viewer is left to try and guess who the killer is … 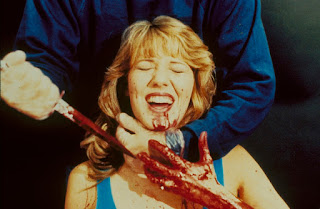 Of course it’s a curveball at the end which answers the question of why Kelly is having the nightmares … but ultimately it’s not very satisfying. 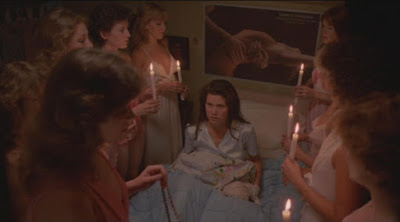 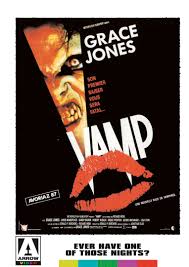 Another eighties horror film, and this time something which has something of a poor rep, but it’s hard to see quite why. There’s a lot to like in Vamp.

It’s ostensibly the tale of a couple of young men about town, Keith (Chris Makepeace) and AJ (Robert Rusler) who, in order to pass a College initiation ceremony, have to procure a stripper … so they head for the most jumping joint in town after procuring a ride from Duncan (Gedde Watanabe), a rich, but lonely, loser. They end up at the place where Queen Katrina (Grace Jones) performs, except that she’s a vampire queen and just about all the other performers at the club are also vampires. All except, strangely, for Amaretto (Dedee Pfeiffer), a familiar young girl who, it turns out, once kissed Keith. AJ is killed by Katrina and becomes a vampire himself, and Keith and Amaretto have to escape from the vampires, corrupt police and a psycho-albino vampire … Duncan is also vampirised, and it all comes to a head as they flee through the sewers and stumble across the vampire’s lair … 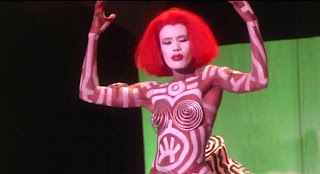 The film is great fun, and in common with gems such as Fright Night (1985) and Return of the Living Dead (1985), it doesn’t take itself too seriously. There’s some smashing make-up effects, Grace Jones is as weird and kooky as you would expect her to be – one distinctly gets the impression that for her stage routine, they just pointed the camera and let her get on with it – and Dedee Pfeiffer is cute and perky and ‘girl next door’ as anyone from Night of the Comet (1984) or pretty much any other eighties horror flick. There are also elements which seem to have been borrowed by From Dusk Till Dawn (1996) … and lots more besides. 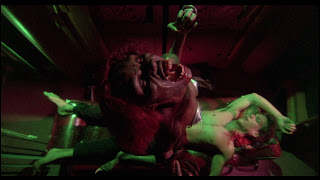 It’s a film to enjoy with a few beers, and to snuggle up with the girlfriend (or boyfriend) … as such were these films designed to be. 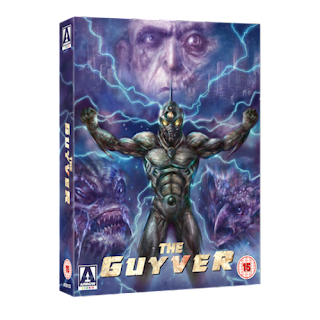 The Guyver is a film which somehow passed me by! It's also quite hard to categorise, being a sort of superhero movie, where the hero is as mutated and twisted as the bad guys ... oh, and they all look like monsters ...

Based on original Manga and Anime, the film has an immediate feel-good credential as the amazing FX artist Screaming Mad George is involved as both FX and co-director ... and it's a good call as the film relies on various mind-blowing transformations and monsters for its impact.

The idea is simple: as an opening sequence of text tells us: there are alien monsters among us, who can disguise themselves as humans ... and the only thing that can defeat them is a human using a transformation device called a Guyver. So enter Sean (Jack Armstrong), who stumbles upon the Guyver device after it is smuggled out of the Chronos Corporation HQ. It changes him into this amazing super weapon ... and from that point it's fights and chases and action as the alien monsters all want to get their hands on it! 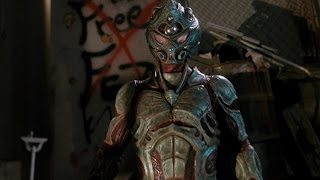 To be honest, it's pretty much exactly the same as watching Power Rangers only slightly more for adults. The monsters all look like creations from that show, or perhaps early Lost in Space and have the same habit of throwing dialogue and quips in all the time as they fight. It's certainly not to be taken seriously!

When Mark Hamill (yes, him off of Star Wars) turns up and ends up being transformed into some giant beetle thing, you know it's not going to end well!  And the final battles against a giant monster (which is what the CEO of Chronos turns into) is likewise great fun. 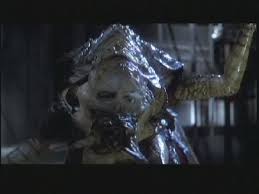 And that really sums up the film ... it is great fun! Linnea Quigley (off of Return of the Living Dead) appears as a 'scream queen' when one of the monsters invades a film set on which she is working, and Michael Berryman (off of The Hills Have Eyes) plays Lisker, the lead monster creature ... Even Jeffrey Combs (off of Reanimator) makes an appearance as 'Dr East', playing off his popular role as Dr West in the Lovecraft films ... 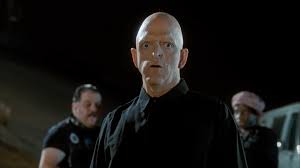 There are fights galore, transformations aplenty, gloopy monsters in vats, enough bodily fluid to keep David Cronenberg happy for months, and a crazy plot which just about holds everything together. It's a great film in its own way, and a good way to spend an evening with friends and beer ...


FIRST PRESSING ONLY: Fully-illustrated collector’s booklet featuring new writing on the film
Posted by David at 1:52 pm No comments: 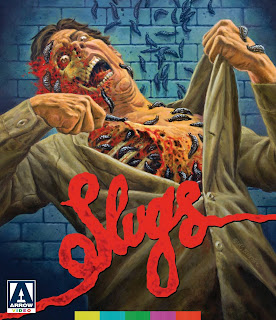 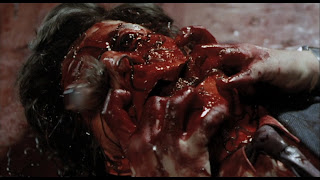 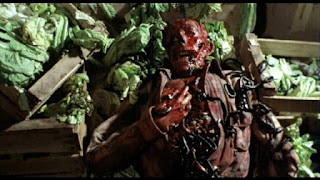