It's a Wind Up 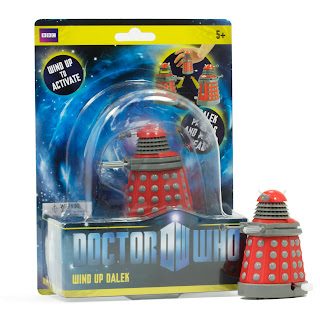 Among the myriad of Doctor Who toys which cross my path are some which are really simple and cute and do what they say on the tin. When some of the stuff being released costs literally hundreds of pounds to buy, it's great that there are some true pocket money toys out there.

I recently got the three new releases from Blew, a company which seems to have offices all over the world! They have released some lovely little wind-up Daleks and a TARDIS, all for a rrp of around £6, but which can be found in some of the cheaper shops (like B&M) for half that.

The TARDIS is a nice little model - it even has a wood grain effect on the outside rather than being smooth which I liked. The action on this one is that you initially pull it back, and then release it. The TARDIS then spins round 360 degrees while moving forward. A very simple and effective desktop toy. Why it's therefore called a 'wind up' TARDIS I don't know, as you don't wind it up.

Here's a video of it working:


Along with the TARDIS, there's also two variants of Dalek available: a red one and a yellow one. Personally I like the yellow (Eternal) one - every Dalek seems to be in red or blue, so to have something different is nice. The Daleks are slightly different from the TARDIS in that when you wind it up and release them, they then patrol forward, the head swinging from side to side. It's a simple toy and yet something which I find quite brilliant.

Here's a video of the Dalek in operation:


The toys would make ideal small presents for the Christmas tree, and I hope we get to see more brilliantly simple examples being released.