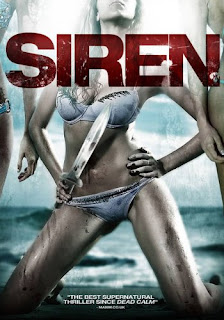 Trying new films can become a little addictive, and I quite like discovering something in the local Blockbuster which turns out to be OK ... but sometimes low budget films can be a little bit hit or miss.

Take a film called Siren for example. It's got a great cover showing a bikini clad girl holding a big knife ... It's not bad at all overall. The basic plot follows a man Ken (Eoin Macken) and his girlfriend Rachel (Anna Skellern) who head off on a boat trip with another male friend Marco (Antony Jabre) who is an ex-of the girl. The very start of the film shows a gorgeous woman in red waiting to be picked up at a lonely crossroads, a car drives up and she gets in, then the couple try and have a liaison in a deserted toilet block but she thinks she sees someone and it all stops ... but then we realise that the couple are play-acting and are in fact Ken and Rachel.

This opening is great but doesn't have any relationship to the rest of the film. The trio arrive at an island where a man swims out to them. He doesn't speak English but has blood coming from his ears. He dies on board so they decide to take him to the island to bury him. There they find another girl, called Silka (Tereze Srbova), who seems to know what is happening but won't say. Silka seduces Rachel, and the two men both find her very attractive as well ... but then the film goes off into a little world of its own with hallucinations and doubles, wandering about, finding bodies, people vanishing ... and all completely unexplained. 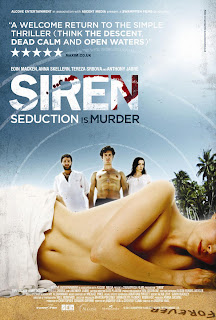 It seems that Silka is a Siren and kills men (but why, we don't know). We also don't know why she is seducing Rachel - I thought maybe Rachel was the Siren but didn't realise it, or that she and Silka were sisters ... but no. Eventually Silka is killed, and Rachel is left on the island alone as both the men have been killed as well ... and the film ends.

It's beautifully shot and really well acted from all the cast, but the script really needed some work to focus things and to add some sort of context. If Rachel was the Siren, and was just 'play acting' as human, then that would have linked nicely into the opening sequence. But as it is, the film starts well, but loses it's way about half way through, and then limps to an ending which, if not making much sense, just leaves the viewer hanging with no real closure.

Overall it's enjoyable to watch and has a nice claustrophobic feel to it. The locations are well chosen and used, and the cast excellent ... just don't expect it to make sense.