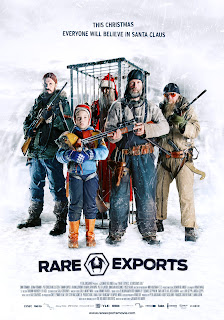 It's Christmas, so what better film to watch than a Christmas film! However, being as this is me, I'm not looking at more traditional Christmas fare, but something a little bit out of the usual.

We stumbled across Rare Exports: A Christmas Tale in our weekly trawl of Blockbusters looking for interesting things to watch. First of all, it's subtitled - the original film is Finnish - and then the lady in the shop was saying she wasn't sure we'd like it ... we weren't sure ourselves as it looked like it could be some slasher/torture fare perhaps, but decided to give it a try. And I'm glad we did!

The film is about Santa Claws, but not the sanitised, Coca Cola happy bearded man variant. This is the original, dark, demonic Santa who came and took away and ate children who were naughty. It's set in an isolated Finnish village, all ice and snow, and a group of Western scientists/explorers have found something buried under one of the local mountains. In a nice touch, one of their drill bores has discovered a vast layer of sawdust and woodchippings deep underground - the waste from Santa's workshop perhaps?

Alongside this story, we follow the lives of two kids, Piatari and Tommi who are worried that the explorers have found Santa and will set him free. Piatari finds footprints outside his window, and the reindeer are all found slaughtered meaning that the village will have no income for the next year. The boy's father, Rauno, sets a bated trap, and they capture what seems to be Santa himself - a filthy old man, naked, and with a long white beard. He is mute and plays dead and deaf, but becomes alert when Piatari is close ... and they realise that what they have is not Santa, but one of his helpers. And that Santa is actually still captured at the Scientists' base. 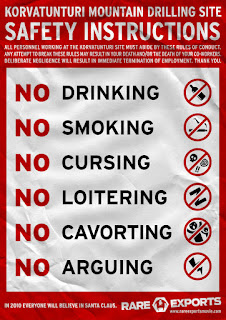 The film is charming and very imaginative. I loved the idea that Santa's 'elves' all look as we might expect Santa to look - old men with beards - but they are basically going around kidnapping all the children, and also making plans to defrost Santa himself from the huge block of ice that, The Thing-like, he is trapped in.

The direction is assured and the cinematography lovely, with all the ice and snow lending a superb backdrop to the events. The actors are great, with little Piatari stealing the show. From the cast list, it seems that Onni Tommila who plays him may be the real life son of the man playing his father, Jorma Tommila, and it's great casting!

Peeta Jakobi plays the Elf who is captured, and he does a brilliant job of making this Santa look-a-like creepy and disturbing.

The film has a strand of humour running through it which lightens it all, and the ending is imaginative and memorable, giving the whole thing a sort of fairy tale (more Grimm than Andersen) feeling.

If you get on with subtitled films, then this should be added to your 'should watch' pile along with other fare like the NightWatch films, The Adventures of Adele Sec-Blanc, and of course A Chinese Ghost Story. It's perhaps better than the recent Dead Snow as well ... definitely a Christmas Treat to be enjoyed.