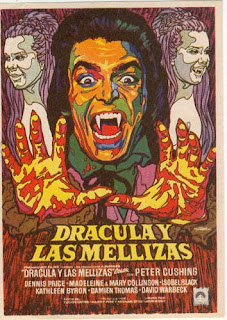 Having temporarily run out of DVDs to watch last night, we turned to some of the staple classics and chose to rewatch Hammer's wonderful Twins of Evil film.

I have loved this for a long time. When it was repeated on television sometime in the seventies, I even recorded the soundtrack onto tape so I could listen to it - in the same way as I re-enjoyed all the old Doctor Who stories before I had video to record them with. I love Harry Robinson's score - it's so evocative and just sends shivers up my spine every time I hear it.

The cast is near perfect - from Peter Cushing's wonderful ascetic Gustav Weil, through the evil Count Karnstein played by Damien Thomas (I wondered what had happened to him, and a quick check of IMDB shows that he's done a ton of stuff, lots of series, and is still working today! http://www.imdb.com/name/nm0858669/), and even the minor roles like Luan Peters (remember her from that Fawlty Towers episode 'The Psychiatrist'?) and Alex Scott as Hermann manage to shine.

Of course everyone goes on about the twins themselves, Madeleine and Mary Collinson, feted for appearing in Playboy before they made in the film (see here for more on that story: http://www.playboy.co.uk/girl/418/madeleine-and-mary-collinson), and they're not bad at all. I like the way that the 'good' one is obviously good, and the 'bad' one has that look about her ...

The film is very well made, set in Hammer's indeterminate time period and it's European setting (this time the town is called Karnstein, presumably after the castle and the Count who lives there), and the most is made of the locations. The film is actually quite vicious, with several burnings of young women, not to mention a chap at the end who gets a flaming torch in the eye, and of course the beheading of Frieda, which is very well done indeed.

Even the traditional vampiric disintegration of the Count at the climax is well done, and I remember thinking how good it was the very first time I ever saw the film.

For me Twins of Evil is one of the best of the Hammer films. Others I am very fond of are Vampire Circus, most of the Dracula films, but probably Taste the Blood of Dracula, and Legend of the Seven Golden Vampires on top, plus many others like Plague of the Zombies and The Reptile.

Hammer are at the moment releasing new novelisations of some of their catalogue, and this initially sounded promising, but recently I heard that the novelisation of Vampire Circus relocates and retells all the action in a modern setting ... no!  Most of the charm and appeal of these films is that they are set in the 'Hammer-verse' and to mess about with that would seem to be a recipe for disaster ...

It has been years since I have seen Twins of Evil, reading this makes me want to go back and watch it again.

I am very fond of the Reptile as well. When I first saw The Reptile it scared me as a child, couldn't sleep for days. Picked it up on DVD a couple of years back, must find some time to watch it again.