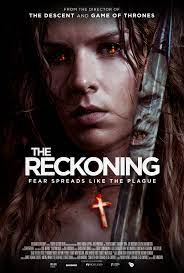 It's hard to know where to start this review. Once upon a time, the name Neil Marshall was the best new hope in horror, with his debut feature Dog Soldiers being one of the top werewolf films ever made - up there with The Howling and An American Werewolf in London - and the follow up, The Descent, being a brilliantly claustrophobic creature feature of the very best kind.

Since those two classics, however, Marshall has struggled. His science fiction opus Doomsday was a flat re-telling of Escape from New York, and Centurion was a dull historical yarn. His segment of Tales From Halloween was disappointing, Hellboy was a bit of an improvement, and now we have another historical tale in The Reckoning.

Set in the plague-ridden 17th Century, Marshall tells the story of a woman, Grace Haverstock (Charlotte Kirk), who loses her husband to the plague, and who is then accused of being a witch by the local squire (Steven Waddington). The witch-finder Moorcroft (Sean Pertwee) is called in, who proceeds to torture her to confess to being a witch, which she refuses to do. 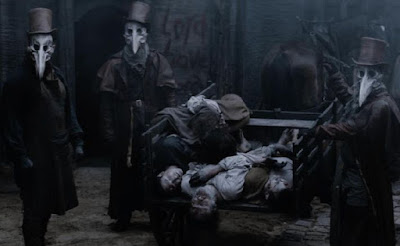 It's all very predictable and hopeless, recalling the much better Witchfinder General, and, strangely, elements of Captain Kronos Vampire Hunter, and although Pertwee is by far the best thing in it, the other main cast members are weak and unbelievable. Especially Kirk, who seems to walk through it all with something of a bemused air. Of the supporting cast, Emma Campbell-Jones is great in the brief time we see her as Charlotte's mother, before being burned at the stake, and the young lad (Maximillian Slash Marton - I think ...) who takes pity on her is likewise excellent.

There's some nasty torture here which Charlotte seems to shrug off with indifference, and some sort of gruesome internal torture device - which is inserted into an unnamed cavity and then slowly opened - would have left her bleeding to death, and yet she seems unaffected by it. Perhaps she really is a witch. 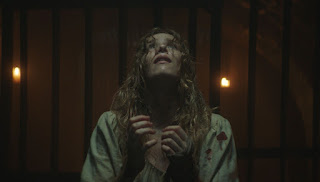 It's such a shame that the plot is so unfocussed and rambling. It takes about ten minutes of screen time to see Charlotte's husband killing himself and for her to find him, dig a grave, and bury him, all interspersed with flashbacks explaining what happened. We should have opened with him dead, and then got on with it!

The visuals are excellent, though, with plague-masked villagers ganging up on Charlotte, and the scenes of death and poverty are well done. One thing I've never quite understood about the whole 'witch mania' which apparently gripped England, was why other men and woman were so eager to decry their neighbours as being witches, knowing full well that it could, and sometimes would, be them next. The film doesn't explore this, and instead seems to be more about how Charlotte can stay above it all, protesting her innocence, while Moorcroft tries ever-more painful and degrading tortures on her.

There's a very vague supernatural element as Charlotte seems to see the Devil (Ian Whyte) at various points, but this is not expanded on or explained - perhaps it's her hallucinating due to the pain? Perhaps it's real? Perhaps it's an allegory? There are no answers in the film.

Ultimately this seems to be a film with a weak script, starring an unimpressive lead, and telling a story which has been told many times before. As a viewer I was left wondering what the point was. It's a great shame as Marshall has a great sense of the visual, and yet he seems to be struggling to find the right projects to realise. I hope he can come back more strongly soon. 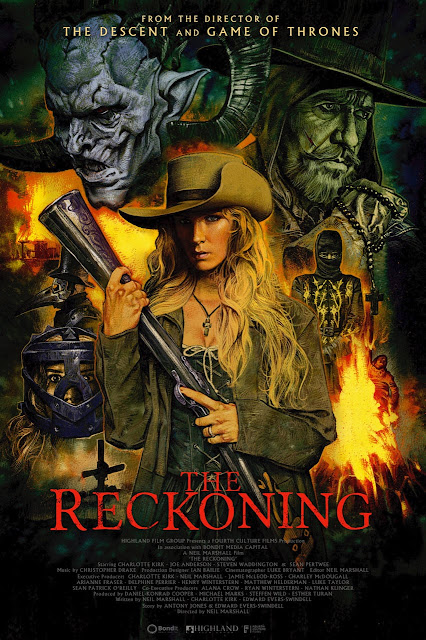