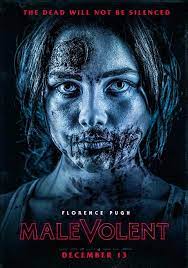 One of the most noticeable things about the plethora of low low budget films on Amazon Prime and Netflix is the number of ghost and haunting-type screenplays that there are. I guess this is because making a haunted house/shop/lift/car film with a small budget is easier than most other sorts of horror flicks. I tend to think this shows a lack of imagination and ambition, and is perhaps insulting to classic low budget films of the past like Night of the Living Dead and Halloween ...

Therefore when you see a film which says it's about a group of so called paranormal investigators scamming victims with fake 'exorcisms', my mind immediately went to the cheap and rubbish setting. But in this case, I was doing the film a disservice ...

We chose this one to watch as one of the leads, Ben Lloyd-Hughes, actually stars in my wife's forthcoming film The Stranger in Our Bed (she wrote the bestselling book on which the film is based, as well as the screenplay). We've not yet seen the film ... so we thought we'd catch up on what Lloyd-Hughes was like as Jackson, the lead investigator ... and he's brilliant!

Malevolent, directed by Olaf de Fleur Johannesson with a screenplay by Ben Ketai and Eva Konstantopoulos, based on the novel Hush by Eva Konstantopoulos, starts out like many other Haunted House films: a group of young and pretty investigators looking into some hauntings, faking some results and then claiming they have removed the problem ... except it's all a scam to get money.

Then they get a gig at a crumbling mansion in which the owner, Mrs Green (Celia Imrie) claims there is screaming. They investigate, but Angela (Florence Pugh), one of the team who actually does seem to have real psychic powers, starts to see young girls appearing, but they have their mouths sewn shut. The house has a murky past, and Mrs Green was somewhat involved ... 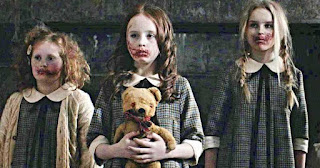 This is then where the film turns on its heel and becomes something of an Eli Roth torture-porn-type film, with Mrs Green turning out to be a dab hand with the needle and thread, as well as with a hammer, a pair of garden secateurs, and other sundry nasty implements of pain.

If you have a strong stomach, then it's not a bad watch. There are some moments of WTF as we progress, with previously unseen characters appearing, and a confusing ending - I don't think the writer or director really knew how to end it ... or they wanted it to appear on those websites which explain the endings of films to people ...

It's certainly a step above other fare, with great production values, some superb performances from all concerned, and convincing effects. The cast also includes James Cosmo - and he's always worth the price of admission - but Celia Imrie, along with Florence Pugh, are the real stand-outs here - both holding their own as the paranormal erupts around them!
Posted by David at 2:54 pm