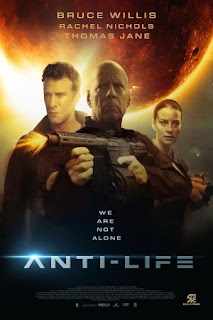 Well that was something of a mish-mash of ideas! Anti-Life (which also seems to have been called Breach) has elements of Alien in there, and The Thing, and also pretty much any sci-fi film with Bruce Willis ... add in conceptual stuff like Earth being evacuated, Humanity in giant spaceships heading for a new planet, and you might start to get the idea of what Anti-Life is all about.

The problem with it is that there's almost too much going on, and stuff happens for no particular reason than to progress the action. Basically there's a ship heading off to a new planet, and Our Hero, called Noah (Noah's ark ... get it), played by Cody Kearsley, gets on it with his pregnant girlfriend Hayley (Kassandra Clementi), who happens to be the daughter of the Captain. She is put in stasis for the journey, but strangely Noah pretends to be a junior janitor and joins the crew who are to keep the ship going for the next 80 days or however long it will take to get there.

Meanwhile, Bruce Willis is there as Clay, a senior janitor, who makes moonshine in the cargo hold ... there's also a worrying amount of some powerful acid-like stuff on board which eats through everything a little like the Alien's blood in Alien does ... 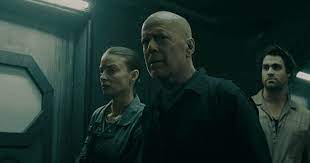 And there's an alien life form too ... not sure where it comes from but it's inside one of the crew, Shady (Johann Urb), and bursts out of him, exploding his body as it goes, and then infecting another crew member, Blue (Johnny Messner), who is nearby. Annoyingly the effect is cut away from and we don't see the monster ... in fact this is a common trend throughout, not showing anything until we get to the Big Bad at the end ... and then we realise why ... it's just not very good!

The alien infects person after person, turning them into zombies which then rampage and attack everyone else ... and so the thing spreads. The crew discover that guns and lasers and so on might chop the humans up into pieces, but those pieces then join back together to form a Thing-like composite creature which continues to rampage ... And then they discover that the acid stuff kills the human shells - melting them away.  So they use that ...

Meanwhile the alien collective has got into the nuclear power centre of the ship and has accelerated it towards New Earth - it wants the planet! So Noah and Hayley have to stop it!

The film had the potential to be quite good, but there's too much running around and shooting, and not enough of the monsters (apart from the infected humans, who drool black goo, have a tentacle where their tongue was, and scream a lot!).

Oddly, the whole thing reminded me of author Sam Stone's far superior short novel, The Darkness Within which deals with similar themes (human race heading to the stars on a ship, an alien incursion, turning the humans into zombies etc) but which handles them far more logically and cleverly than this film does.

Overall it was an enjoyable mess of a film, with Willis phoning in his performance, and the effects of the composite monster at the end being something of a letdown. Diverting, but annoying, as it could and should have been so much better.