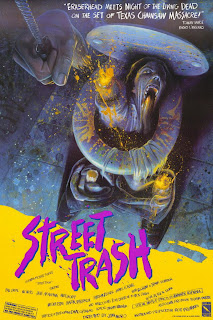 Three more films to delight and entertain, but in differing degrees ...

First off, a little thing called Street Trash that we caught on the telly recently. I'd not seen this before, but had heard thing spoken of it around the melting effects on show. So Sam and I cranked it up on the Sky recorder and gave it a watch. What a pile of rubbish!

Now I'm usually quite tolerant to 'good' bad films - those which have a bit of fun and bely their lack of budget with enthusiasm, but this was painful. I'm not sure it has a plot. The central strand seems to be about a shopkeeper who finds a crate of a liquor called Viper in a sealed area in his basement, and then decides to sell it for a dollar a bottle. Luckily there's lots of vagrants who use his liquor store and so bottles get bought (or stolen). However anyone who drinks it, then melts into a technicolour goo within seconds.

I will give them that the melting effects are neat - I loved all the colours which made a change from the usual blood red gore - but aside from this, the film has nothing to offer. There's boss vagrants abusing girls and women, other people running about, vagrants picking up girls and having drunken sex ... it's all a selection of random scenes and images which don't have a common thread. Which is a shame, as with a better script it might have been half watchable. 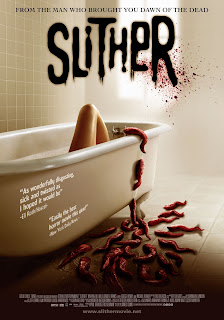 Another film that I spotted on the tellybox and recorded was Slither. This is a great monster movie about a meteor which crashes to Earth and releases a large alien slug-thing. This infects a local man who starts to mutate and change, and he in turn infects a woman who he then keeps in his hay barn. He feeds her raw meat and she blows up to the size of a balloon before exploding and releasing thousands of little slugs which head off to get into as many people as they can.

Before you can say Zombie Apocalypse, the infected are staggering about in classic zombie fashion, chasing after a small band of people who mange to remain human. Good to see Firefly's Nathan Fillion as the local police chief trying to survive to the end. It all ends with a climactic battle against the original infected man, who has become a sort of John Carpenter Thing-like monster, with tentacles and teeth and all sorts.

We had great fun with this. It's well made and acted, and hugely enjoyable. The effects are great, and the CGI slugs are icky and nasty. A fun way to spend an evening. 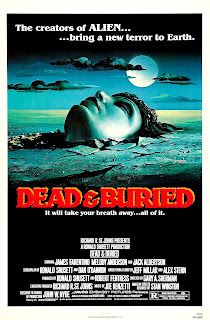 The third film is an oldie by the name of Dead & Buried. I used to have the poster for this pinned to my bedroom wall as I loved the imagery, but I don't think I'd ever seen the film until now. It's another sort-of zombie film I suppose, in which a hick town undertaker is able to bring the dead back to life to populate the town. It all gets a little out of hand, and the townsfolk start actually killing strangers to add to their number, and all this gets the local sherriff (James Farentino) somewhat confused. It's got Robert Englund in it, and was written by Dan O'Bannon and Roland Shussett who also wrote the screenplay for Alien ... it's good a good pedigree.

It's a fun watch but I found it confusing - you need to have a good memory for faces to recognise that people killed early in the film reappear later on as townsfolk with no mention or pointer to this fact. But the deaths are good and gory, and there's a scene I can't watch where a poor patient in hospital gets a syringe in his eye!

Overall it's well made, directed and acted, and moreover it's an original take. I've not seen anything quite like it before (or since) and like Alien, it's testament to the originality of the authors.  I suspect we need more films like this, and less remakes of films which were perfectly good (if not classics) in their original form.