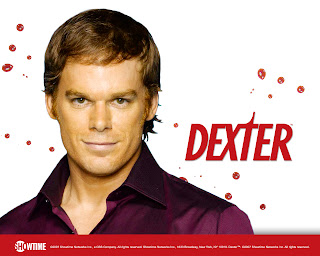 Dexter is not a series I would chosen to have watched as I'm not a fan of things like the CSI series and NCIS and other cop shows like that. But Dexter isn't quite like those. Sam got the box set for Christmas, and I'm so glad I got the chance to visit what is arguably one of the best shows on television.

If you've not given it a try, then I recommend you do. Each season is 12 episodes long, something of an anomoly in American TV where usually a season has 22 or so episodes. The premise is simple: Dexter Morgan works for the Miami Police as a Blood Specialist - more specifically a Blood Splat Specialist - he can examine the aftermath of a crime and work out who was killed, by what implement(s) and how the crime was carried out by analysing the way the blood fell, pooled, spattered and trailed. He's also a serial killer himself ... but he only goes after the bad guys - those who are killers themselves and who have evaded justice thanks to technicalities in the law, poorly constructed prosecutions or soft judges. At least that's where he starts out. 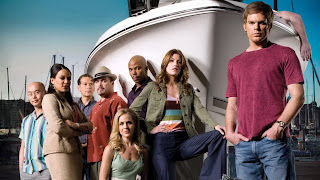 The reasons for his 'hobby' are all part of the clever backstory, in which Dexter's mother was killed by criminals, and he was rescued from a pool of her blood as a baby by a policeman - Harry - who then adopted him as his own. Dexter describes his need to kill as his 'Dark Passenger' and he keeps it hidden from everyone else.

The series themselves each follow a basic arc - in that Dexter's colleagues at the Miami PD investigate some serial killer or murder, and this then develops into an often convoluted plot which gets deeper and darker as the episodes move forward. Suspects are found, sometimes they are then killed, and the real killer becomes apparent. 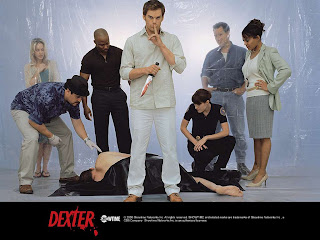 The first series follows a killer dubbed 'The Ice Truck Killer', the second is 'The Bay Harbour Butcher', the third is 'The Skinner', the fourth is 'The Trinity Killer' and the fifth is 'The Barrel Girls Murderer'. In each case, Dexter gets involved in the action both through his work for the Police, but also through the changes in his private life which involve his girlfriend, Rita, and her two children, getting married and having a baby himself. There's also his sister, Deborah 'Fucking' Morgan who talks like a man with Tourettes, but who has a heart of gold. The other regular characters are the other police: La Guerta, in charge of the group who is manipulative and self-serving, Angel, the cop who loves La Guerta, forensics expert Masuka who loves bad jokes, and Quinn, who develops through the series into love interest for Deb. There are others too who come and go as the episodes progress. 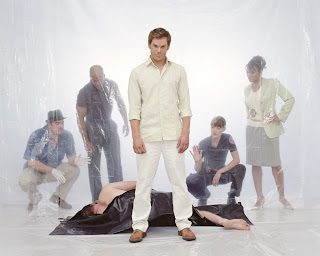 There is a revolutionary central performance from Michael C Hall as Dexter. He is completely believable, and his acting is flawless. This is part of the main appeal of the show, to see this character that you should dislike - he is a merciless killer - become someone you care deeply for a root for. You cheer when he offs his victims, and you don't want him to get caught. Hall plays it so well, that in the first episode of Season 5, where events cause Dexter to break down somewhat, your heart wrenches with him - Sam spent most of that episode in tears it was so effective and moving. I read that Hall won the Golden Globe for his performance and rightly so. Other standouts include Julie Benz as Rita, an incredible piece of character development from mousy shy girlfriend to strong, feisty wife. We were also very impressed indeed by John Lithgo in Season 4, playing the Trinity Killer. He is cold and complex and totally believable. A marvellous performance and, as Sam and I observed at the time, somewhat career defining, which is pretty good going for the man who made us laugh so hard in Third Rock from the Sun. Keith Carridine turned in a great role as Detective Lundy, first as the cop leading the investigation in Season 2, and then hunting the Trinity Killer in Season 4.

The series is compelling in terms of plot, acting, production and emotion. I defy anyone who has watched it all not to be moved by the opener of Season 5. It is truly a gem, full of brilliant writing, lines which make you laugh and smile, touches of humanity, and of grief, of deep seated trauma, and of people coming to terms with who they are and what they are on all sides.
Posted by David at 9:46 am