The Official Doctor Who Fan Club 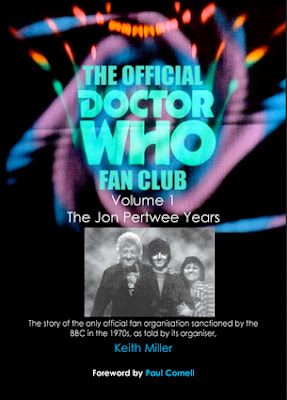 Doctor Who fandom goes back a long way ... much further than perhaps people realise. We did a series on the history of fandom for our fanzine The Frame many years back, and determined that there was a fan club for the very first Doctor, William Hartnell. But the purpose of this review is to look at a new book which has been self-published by Keith Miller, all about the early days of fandom in the seventies, when Jon Pertwee was the Doctor. Thus a thirteen year old boy from Edinburgh decided to write to the BBC and see if he could start such a thing ... the secretary of the Doctor Who office, Sarah Newman, agreed, and there then began what can only be described as an incredible few years, during which Miller produced newsletters, contacted merchandisers, visited the studios, and even was party to some early fan politics.

In the book, Miller reproduces all the editions of his fan newsletter, and intersperces them with the correspondence he had with all the parties. In a way it's a shame that none of Miller's actual outbound letters are here, just the ones he got back, but such was the technology of the day, that I guess there wasn't a way he could keep copies of everything he sent - and why would he think to anyway! They're probably in a musty file somewhere in the BBC's Written Archives centre though. These responses paint a fascinating picture, and moreso of Sarah Newman and her unswerving support of the young Keith Miller.

She is nothing less than a miracle worker. Arranging to have the newsletters printed and despatched by the BBC, supplying publicity photos and envelopes, agreeing to reverse charges phone calls so he could speak to her ... and all of this on top of her normal job!  In a way, if Miller had not been only thirteen, this could be a real sequence of love letters! She is encouraging and supportive, giving him advice on how to handle things, keeping the other fans away who were trying to overthrow him, and generally being the rock on which the club was built.

It's hard to believe the BBC today - or any organisation at all - behaving in this way towards an enthusiastic fan. But things were much simpler back then, and Newman must have taken a lot of risks to help Miller in his endevours.

Along the way we learn that Frazer Hines was at one point due to be in 'The Three Doctors', that Jon Pertwee smoked and was vain - complaining whenever the fan newsletter didn't, in his opinion, feature him enough - and yet despite this, made time for Miller when he visited the studios. One of the most poignant elements in the book is a reprinted letter from Roger Delgado which Miller received from him ... saying that the Master won't be around for much more ... and then of course Delgado died in a motor accident. Miller goes on in a footnote to explain how a fan visited his house and stole the original letter from his scrapbook whilst unattended - an act which is pretty unforgivable!

The process by which the Newsletter was made is archaeic by today's standards, being typed on stencils which were then Roneoed to produce the final printed sheets: the Roneo being a machine which squeezed ink through the holes in the stencil and imprinted them on the paper. There's more about the process here: http://en.wikipedia.org/wiki/Mimeograph. I know it as my friend Owen Tudor had one in his garage and many of the fanzines that we produced in the late seventies were produced using it (Beka and Colony in Space being two that spring to mind). But Miller included art in his magazine, made by tearing and pricking the stencil with a pin - painstaking!  It wasn't until around 1977 that photocopying started to become available, and this ushered in a new age of A5 and A4 fanzines, all made with typewriter and Letraset lettering ... but this was years away from what Miller was doing.

The book is a fascinating collection of letters and information, all dated and interesting. It makes me want to dig out some of the stuff I have in files somewhere and put them together as well ... Like Miller I am a hoarder and have most of everything somewhere.

If you're interested in the early days of fandom, and are intrigued to see what the first (probably) regular Doctor Who fanzine looked like, then this is your chance. I suspect that a thirteen year old Keith Miller would have had kittens at the prospect of his work being as professionally printed as this, and with a colour cover to boot! These days we are so spoiled with the ability to print on demand ... but this takes you back to the smell of ink and oil, and to the enthusiasm of one fan to write about and share his favourite show.