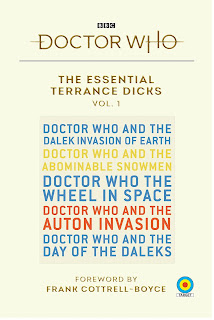 I doubt there is a Doctor Who fan alive who doesn't know the name of Terrance Dicks. He is synonymous with the show ...

If you don't know who I'm talking about: Terrance Dicks was a writer on Doctor Who (and other popular TV shows like Crossroads and The Avengers) in the late sixties. In 1970 he worked as Script Editor on the show, writing many episodes himself, and he continued to write for it after he left as Script Editor in 1974. In 1973 he was approached by Target Books to pen some novelisations of the show for them, and he ended up writing over 60 of the books! He was also a prolific children's writer in many other fields.

Many Doctor Who fans cite Terrance as the man who got them to read books, and he is universally loved and praised for his work.

I was lucky as a young fan back around 1976, to make Terrance's acquaintance through a fanzine I was starting up, and also a friend (Paul Simpson) who had already made contact with Terrance and who invited me along with him to meet the author! Thus began a life-long friendship with Terrance. I would pop over and see him and Malcolm Hulke (who lived in the next street) regularly, chatting about his work and Doctor Who. Terrance came to events that I organised and spoke and met other fans: he was a gracious and friendly man, always willing to chat and to share advice.

As I grew up and started work, so my Doctor Who projects became ever more professional, with books coming out from the BBC and Virgin Publishing ... then I had my own publishing house, Telos Publishing, and more Doctor Who projects followed. Terrance was always there, always at the end of the phone to help and chat about the obscurest of Doctor Who trivia ... he would call me sometimes with questions he had been asked, knowing that I would have the answer.

And then on the 29 August 2019, the phone stopped ringing. Terrance Dicks had sadly passed away. And an era came to an end. 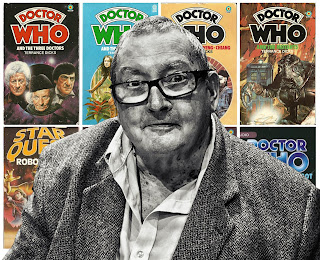 Spurred by the love that the fans had for Terrance, or 'Uncle Terrance' as they termed him - I think 'Uncle Terrance' was seen to be trending on Twitter as news of his death spread! - the BBC ran a poll among fans as to which of his many novelisations were the favourites ... and these two new hardback titles from BBC Books are the result.

Containing ten of his most loved adaptations of Doctor Who adventures, the books collect some of the best writing that there has ever been related to the show. Terrance had a knack, a love of the material, and a deft way with words, which transformed the scripts into thrilling adventures on the page.

The first volume contains a Foreword by Frank Cottrell-Boyce, perhaps a strange choice for the book. Indeed, the text itself provides no clue as to who he is at all - there is a short biography of Terrance on the back cover flap, but nothing more in the book itself. Checking Wikipedia reveals: Cottrell-Boyce is an English screenwriter, novelist and occasional actor, known for his children's fiction and for his collaborations with film director Danny Boyle. He has achieved fame as the writer for the 2012 Summer Olympics opening ceremony and for sequels to Chitty Chitty Bang Bang: The Magical Car, a children's classic by Ian Fleming. Ah ... and he also wrote a couple of episodes of Doctor Who in 2014 and 2017. 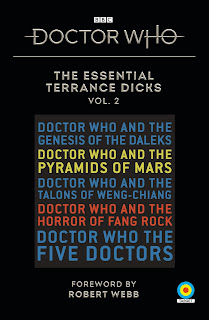 It's a shame there's no longer tribute or biography of Terrance within the two books, and no surrounding matter to support the reprints of the novelisations putting them into context (for example The Auton Invasion and Day of the Daleks were both written early on in 1974, while The Wheel in Space was a much later book in 1988). This seems something of a missed opportunity to me.

If you just want the stories, then at £25 a book, this is perhaps an expensive way of reading them - cheap paperbacks can be picked up online all the time (except perhaps for The Wheel in Space which is very hard to find). But as a tribute and celebration of Terrance Dicks and all that he brought to the many worlds of Doctor Who they are a lovely collection.