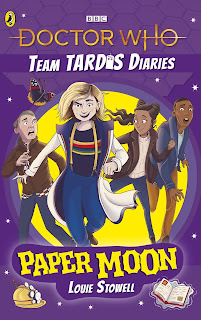 Team TARDIS Diaries is a new series from BBC Books/Puffin, and initially there are two to be bought (the other one is called Ghost Town by Susie Day). They are an interesting concept, in that the book tries to be interactive with the reader - not in a 'make your own adventure' way, but more in the way the storytelling progresses. They use a conceit that the book is actually printed on psychic paper and so can tell the thoughts of whoever is holding it ... thus as the story progresses it passes from a straightforward narrative to Ryan, to Yas and to Graham (with a nice sequence of the Doctor holding it towards the end) and you see the story unfold from the different viewpoints.

The 'issue' here is of course that the book is aimed at and written for 7-9 year olds, and yet I do wonder how many 7-9 year olds are actually watching and enjoying/understanding Doctor Who on television ... some of the ideas and concepts seem far above that age group to me ... especially the latter part of season 13 ...

As a short read, it's therefore typically simplistic and one-note ... The Doctor and her 'Fam' receive an invite to the death of one of the psychic trees who go to make the psychic paper ... and there they run into some pirates ... the illustrations are nice and are scattered through the book in the current style of works by David Walliams and similar and it's so light and fluffy that the book almost floats! 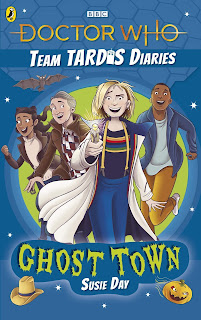 This current incarnation of Doctor Who just doesn't know what it wants to be. The BBC seem to want the show to be current and edgy and ticking all the right boxes as far as race and sex and 'right on' correctness are concerned ... they also seem to think it's aimed firmly at kids as far as the books and merchandise is concerned ... But then they present simplistic stories with a cute alien dog-like creature (Pting) which eats anything and everything (perfect for 7 year olds) alongside tales of machinations by the Master using creatures from parallel universes and attempts to combine cyber-history with Time Lord history which are so complex that even die-hard fans of the show have trouble putting it all together! Or tales of Dalek invasion which look at politics and possession of a very adult and disturbing kind ...

But then you have a jokey, smiley, quipping Doctor who dashes about with her 'Fam' in a TARDIS which looks cold and alien and certainly not a friendly home-space ... she grins and talks a lot, but does very little and has no gravitas ...

It's a strange dichotomy ... books for 7 year olds who have probably never watched the show, and if they did, then they probably might recognise the 'fam', but as to being able to follow the stories ... probably forget it ... and a show which seems to be made to deliberately alienate any fanbase it might have had, in the hope of finding a new one ... somewhere ... somehow ... but with no apparent plan or aim underpinning that hope.

As books for kids, though, these are great!