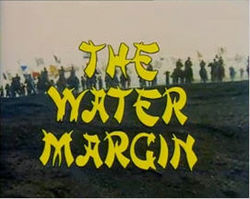 Everyone of a certain age probably remembers The Water Margin ... it was an hourly serial shown on Saturday nights around 1976, and immediately before BBC2's popular double bill of horror films ...

I suppose it's popularity arose out of the fever for 'Kung Fu' and all things oriental around that time ... popularised by the films of Bruce Lee, and David Carradine as Cain in the TV series Kung Fu ... but this was something slightly different.

Indeed, this was a 1973 Japanese production of a 13th-century Chinese epic by Shih Nai-an of a group of 'knights' who rose up against a corrupt government and overthrew it ... The original Japanese series was picked up by the UK, and translated into English by David Weir ... but not subtitled ... no, the original cast were dubbed into English ... and what was clever, was that they didn't worry about an exact translation. They looked at the lip movements and tried to match English dialogue to it, so that the whole thing came across as more naturalistic than a direct over-dub ... 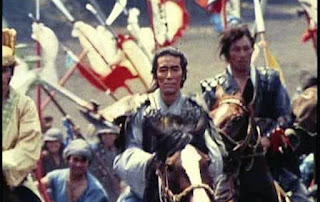 It was wildly successful, and the series lived on in the memories of all who saw it. Now the whole series is available on DVD ... and it's the English dub that we all know and love ...

'Do not despise the snake for having no horns,' says Bert Kwouk at the start of each segment. 'For who is to say it will not become a dragon!' ... and thus the story is told. 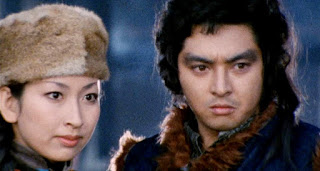 Basically it's the tale of Lin Chung (Atsuo Nakamura), a captain in the Emperor's Guard, who is disgraced by the scheming Kao Chiu (Kei Satō) as he wants Lin Chung's wife, Hsiao Lan. And so he has her, and then banishes her also. Lin Chung is dragged off in chains across the desert, and eventually winds up at Liang Shan Po, a watery district far to the south of the Capital city. There he finds friends and starts to build a community which will eventually rival the government. 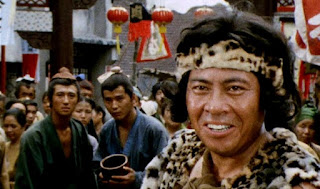 Along the way there are others who join the fight. Legend says there are nine dozen heros - 108 - who will fight ... and we follow the paths of some of them as the series progresses. Chief among them is Lin Chung, but also the female warrior Hu San-Niang (Sanae Tsuchida), Lu Ta (the Priest) (Isamu Nagato), Yang Chih (Blue Face), Wang Lun (Yoshirô Kitahara), Wu Sung (Tiger Hunter) (Hajime Hana), Shih Chin (Tattoed Dragon) (Teruhiko Aoi), Chu Wu (Ryôhei Uchida), Sung Chiang (the Good Judge) (Takeshi Obayashi), Li Kwei (Black Whirlwind) (Hitoshi Omae) and others ... all have parts to play in the drama. The cast is all over the place online with spellings different to those on the box set ... so please excuse me from not crediting them all! 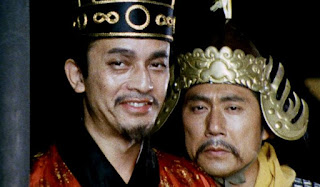 What is good about The Water Margin is that it never gets boring ... everything moves along at pace and there are fights and battles along the way, and characters you like and can relate to. Lin Chung is essentially a good man, a man of peace, and so even at the end of the second series, he is reluctant to just kill Kao Chiu, preferring to let 'nature' have it's way ... but the series still ends on a good note ...

As enjoyable television, the show is superb, combining some great performances, both on-screen and verbal, amidst fast and furious action. The music is great also!

The English cast are mostly uncredited, but here is what I have been able to discern:

Here's a piece on the dubbing process: https://www.bbc.co.uk/archive/dubbing-the-water-margin/zvmft39

And that brilliant theme and titles: https://www.youtube.com/watch?v=TVVRMBWGBqw