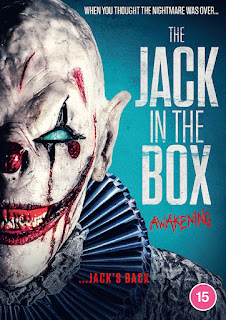 The Jack in the Box
was a fairly decent 2019 film, now available on Prime. The premise was simple, there's a 'haunted' Jack in the Box toy, which, if opened, allows the demon within to emerge and to take 6 victims.

Written and directed by Lawrence Fowler, the film manages to stay serious, and also manages to add a pretty decent new villain to the great horror pantheon ... though quite why this demonic Jack is claiming all these victims isn't clear ...

Move forward a couple of years, and now we have The Jack in the Box: Awakening, a sequel of sorts, but one where Fowler seems to forget the rules he established in the first film, and now presents the demonic toy as some sort of wish-granting entity. The box has been obtained by the son (Matt McClure) of a dying old lady (Nicola Wright) and she opens the box.  The demon (James Swanton) will then take 6 lives, and once this has been done, it will grant her a wish - to be well again.

And thus the film plays out as per the first, with a variety of people: cooks, housekeepers etc being stalked and taken by the Demon ... strangely as this happens, so the old woman seems to get better ... looks like her wish is being granted as the killings progress ... But will she gain her health again at the end? And will feisty housemaid Amy (Mollie Hindle) win out? You'll have to watch to find out!

The main downside to watching was that on the preview copy, they had decided to put the text SCREENING PURPOSES ONLY over the bottom quarter of the screen, all the way through ... very distracting! 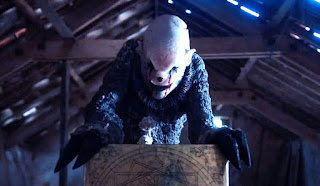 I enjoyed the first film a lot. I felt it showed promise, and had a nice, simple premise. Certainly it's cut from the same cloth as many other films from Hellraiser to Wishmaster and so on, but the makeup is good on Jack, and the actor playing him is suitable creepy.  I was reminded too of the 2018 Channel Zero season The Dream Door which featured the character of Pretzel Jack ... only that was far superior!

The sequel however is to be commended for not just rerunning the same plot as the first film, but also in trying to find a new angle, the writer/director seems to have played fast and loose with his 'rules' ... and the problem with that is then your franchise starts to lose credibility ... You need to stick with the rules and legend you have created, and only expand ... you can't start changing....

THE JACK IN THE BOX: AWAKENING is out now on Digital & DVD in the UK and available in the US on January 18th 2022