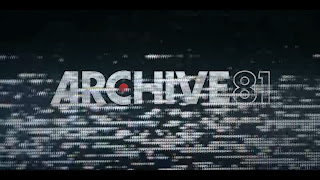 There's a lot of material on the streaming services these days, so when something appears which is actually really good, it's worth shouting about. Netflix's ARCHIVE81 is such a show! It's an 8 part, hour long set of episodes, chronicling the story of a man named Daniel (Mamoudou Athie) who is hired by Virgil Davenport (Martin Donavan) of a company called L.M.G.to salvage and preserve a set of Hi8 video tapes recorded back in 1994 by a woman named Melody (Dina Shihabi) ... it's all tied in with an apartment building in New York called the Visser which was destroyed by fire, and what happened to Melody at that time ... As Dan digs deeper, so he finds himself reliving Melody's nightmare as she investigates the Visser for an oral history of the place as part of her PhD. She records everything on her video camera and so it's all there to be salvaged and played back in the present day. 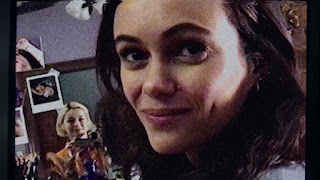 The strangeness starts to emerge as Virgil seems to know that Dan's family was killed in a fire when he was a child, and also that Dan must work out of a deserted facility in the middle of nowhere ... with no contact with the outside world. Dan's father appears on Melody's tapes proving that he's somehow involved in it all ... and a young girl, Jess (Ariana Neal) who helps Melody make contact with some of the apartment's residents also seems involved somehow.

As the episodes progress we're introduced to a strange cult operating out of the Visser, worshipping an ancient icon, and using an unnerving aural chant to invoke a fugue-like state ... And the mystery piles on as more people are introduced, including a present-day Melody who turns out to be an impersonator, Melody's friend Annabelle (Julia Chan) starts drawing images of a mystery-woman who turns out to be the original leader of the cult ... 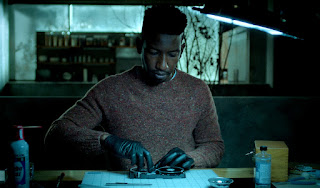 I'm not going to say much more as the complexity and twists and turns of the production are one of it's strengths. It's got a great structure, with Dan in the present day looking back at Melody in 1994, and Melody in turn is seeing things from 1924 ... it's something of a crash of years and ideas as this icon-worship has persisted through the years and forms a backbone for the narrative.  Another strength is the sound design - and as part of the ritual is a strange humming cadence, this is used, along with a simple yet chilling note sequence in the music and sound design, so that the whole production becomes permeated with dread and horror as you watch. It's very clever. 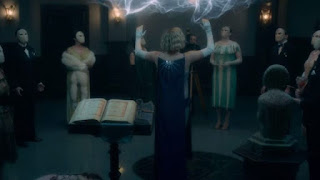 The show is based on a podcast, also called Archive81, which can be found on Apple Podcasts (https://podcasts.apple.com/us/podcast/archive-81/id1098194172?mt=2), and all major podcast apps. The Archive81 Wiki explains that it's a found footage horror podcast created by Dead Signals about ritual, stories, and sound. It describes the Podcast thus: After Daniel Powell goes missing following employment by the Housing Historical Committee of New York State, his friend Mark Sollinger receives hundreds of hours of audio of his archiving there. The audio, released by Mark in the form of the podcast, documents Dan's listening to an extensive collection of cassette tapes, containing interviews from a high-rise apartment building in 1994. So it certainly has a similar background to the TV show.

I found the show totally engrossing, and very creepy. As Dan listens and watches the old tapes back, alone and isolated in this strange compound, so we visit 1994 with Melody ... and when Dan and Melody actually meet and interact, then you know that some deeply weird stuff is going down here ... each episode brings something new, and the nightmare deepens the farther you get. 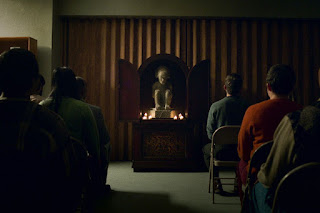 If I had one complaint, it is that I would have given the last half hour or so a good script polish as there are elements there which just leave questions hanging as to what actually happened, and you don't want that after 8 hours of great drama.  It's telling that there's already an article on DigitalSpy explaining the ending, and the search is also one of the selections on Google - it seems a lot of people felt the same way as I did ... what did happen?  And that's not really what you want.