Catching up on books from the year, and two which are very different, but which are strangely similar, are Behind the Sofa edited by Steve Berry (Troubador), and Turn Left by Andy X Cable (Miwk). 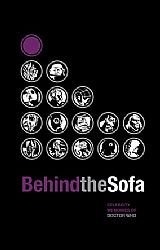 Berry's book was published to raise money for Alzheimers research, and is a very nicely put together hardback tome of memories from a wide selection of people - authors, editors, actors, musicians, politicians ... just about anyone and everyone who has a fondness for Doctor Who can be found within the pages. I have to confess a slight bias as there is a piece from me in there too, alongside writings from Neil Gaiman, Al Murray, Chris Tarrant, Richard Herring, Mark Millar, Konnie Huq, Murray Gold, Roland Rat and Michael Grade!  It's a very comprehensive collection of thoughts and memories of Doctor Who and really establishes that just about everyone has been touched by the programme in some way or another in their lives.

Some of the stories are so familiar, that if you are a fan, then you find fannish comadarie in the tales of Target Books, and being forbidden to watch, of meeting Tom Baker or collecting action figures ... everyone has a shared childhood whether born in the sixties, eighties or even noughties it seems.

The book is beautifully illustrated by Ben Morris, and the whole package is a joy to hold.  If you're at all interested in the memories and love that everyone collectively has for Doctor Who, then please consider buying the title from the publishers' website here: http://www.troubador.co.uk/book_info.asp?bookid=1978 rather than from anywhere else as 100% of the money will then go to the charity rather than some of it ending up in the rather deep pockets of Amazon or wherever.

The other title I have been reviewing is similar in a strange way. Turn Left is subtitled 'An Unofficial and Unauthorised Guide to Doctor Who Road Signs' and is penned and illustrated - in biro - by the (probably) pseudonymous Andy X Cable (though he does have his own Facebook page here: https://www.facebook.com/andyxcable). It's a strange beast indeed, being the journal of a self-confessed Doctor Who fan, who has the habit of connecting every thing he sees to a reference to something in Doctor Who. Thus this book documents all the road signs he has seen, in the order he saw them, and what memories or themes they cause him to consider as a result. We get stories about Doctor Who where the story titles are incorrectly spelt or muddled, characters and actors are confused with real people, and monologues about how he got to the road, or something about his life which relates to the sign, or to Doctor Who or all three. 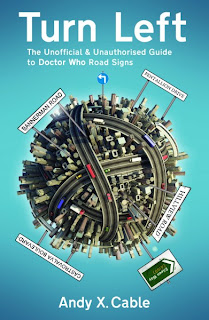 'Andy X Cable' is portrayed as a disfunctional young man, short of friends and devoted to his mother who looks after him as best she can. Many attendees of Doctor Who conventions may recognise elements of 'Andy' in some of their fellow fans, and the stereotype of a fan/nerd popularised (in my mind at least) by the 'Milky Milky' man, Mr Strange, played by Hugh Dennis in The Mary Whitehouse Experience, is the classic depiction of this sort of insular people-challenged individual.

But below the stereotype is a keen satire, and reading through the book, and sniggering at Andy's poor grammar and torturous descriptions, we find revealed to us a man who is often misunderstood, who has no real friends, and who uses Doctor Who as a crutch to help him through real life. As the text progresses, so the entries start to explore more of his world, and then, with crushing impact, Andy's Mum dies, and there is nothing for two months. The entries following this are full of sadness and lashing out at the world, until a friend finally comes into his life in the form of Celia. The book ends with a somewhat upbeat outlook for Andy ... he finally has someone in his life that he can share his passion with ...

It's a difficult read, admittedly, mainly because of the stream of consciousness style of writing, but also because 'Andy' is someone we have all met at some point in our lives. Were we nice to him? Or did we laugh at him? On a personal level, I have always tried to be kind. I remember one mother, who always accompanied her son to Doctor Who events, explaining to me that he looked forward to the events so much that they envigorated him and gave him something to reach for, that they made him feel included in a community, and that he never would go out otherwise. That, for me, is the magic of Doctor Who - in bringing together people of all ages, races, colours, creeds and abilities. To make a person feel included, where their circumstances of life has dealt them cards of exclusion and prejudice. It's what the Doctor teaches - to look beyond the superficial and to embrace the dreams and aspirations of everyone.

Turn Left is an interesting book. Partly a funny and often tangental look at Doctor Who, and partly a social commentary. Well worth a look. It's published by Miwk, a relatively new publisher of all things Cult, so please check out this book, and the others on their catalogue. (http://www.miwkpublishing.com/store/index.php?_a=product&product_id=13)