I must have been very good this year as Santa brought me a fine selection of Doctor Who goodies for Christmas this year ... here's a little round-up.

From Danilo comes this little pocket diary which has a TARDIS design on the front. This is simple, yet effective.  Inside it's a page per week, with little space to pen in those vital appointments and aide memoires. As always with Diaries and Calendars, I've never understood why they don't include notable Doctor Who dates ... here, even November 23 is not marked as the 50th anniversary. It's nicely designed though with little Daleks and Cybermen ... a shame that the TARDIS interior on the front and back endpapers is the now out of date one ... 6/10 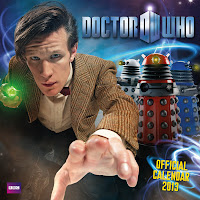 Another generic Danilo production and probably the most disappointing item. Nothing special about it at all. Generic photographs of monsters and companions (Amy has now left, Cybermen are changing etc) and no imagination or thought put into it at all. 1/10

THE CRIMSON HAND/THE CHILD OF TIME

Two graphic novel collections from Panini.  The Crimson Hand is the third collection of tenth Doctor strips from Doctor Who Magazine, and features new companion Majenta Pryce. What's nice about these books is the factual matter around the creation of the strips, with comments from writers and artists as to their development. Leaving aside that it steals its title from the last of Telos' Time Hunter Novellas (Child of Time), the second volume is the first collection of eleventh Doctor strips from the Magazine. For me, the comic strips have never held that much fascination, and so I'm not intimately familiar with the content. Some of the art is patchy, and some of the storylines go off into realms of fantasy ... but I understand that this element of the Magazine has its fans ... 7/10 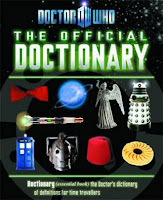 What a strange book. It's penned by Justin Richards as though written by the Doctor, and is a narrative explaining a number of terms in 'Doctory' speak. There's lots of photographs, and lots of material here, but it all feels tired and a little desperate - what book can we do this year to use lots of photographs? I'm sure they sell well, but I can't see the point. I've always believed that you should not talk down to your audience, and yet this is what the Penguin/BBC Children's Books do all the time (there's a clue in the publishers I guess). 4/10 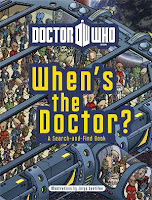 This is more like it. Another Penguin/BBC Children's Book, but this time we have some imagination and fun, as in proper Where's Wally style (or Where's Waldo for my American chums) we have a number of double-page spreads of detailed artwork, and the challenge to spot the Doctor, Amy, Rory and the TARDIS as well as all manner of other items. It's brilliantly done, and one can spend some time working through the drawings to appreciate the thought that has gone into it. It's a companion book to Where's The Doctor which came out last year, and it works very well indeed. 8/10

THE OFFICIAL DOCTOR WHO ANNUAL 2013 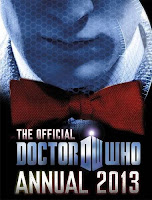 I can't remember the last time I actually got a Doctor Who Annual for Christmas!  Usually I buy it in the January Sales ... this time the book is published by the ubiquitous Penguin/BBC Children's Books and is edited and written by Jason Loborik who previously had a hand in the Battles in Time magazine, and who is also credited as editor on The Official Doctionary... this is all part of the problem ... it's the same people, over and over writing and editing these books ... so the dearth of ideas and approach, and the whole generic 'safeness' of it all saddens me. The Annual is very bland. There's lots of generic pictures, stuff about last year's season - which now seems very old ... nothing about the 2012 adventures or what we are currently seeing ... and nothing reflecting that 2013 is the 50th anniversary. Such a shame and something of a wasted opportunity. 4/10