Three films for this blog today ... two of them vampire movies, and a third which stars the same person as one of the previous two ... don't say this blog is never thought out. 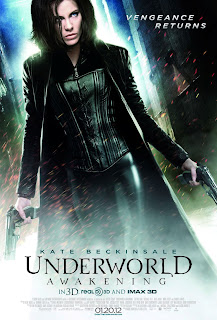 First off then, the latest in the Underworld saga, being Underworld Awakening. I think I need to draw a veil over the third film in the franchise which was poor and unengaging, and we all knew the plot anyway as it was the backstory to films one and two ... and it didn't have Kate Beckensale in it as well which was a major minus point.

Film four picks up where film two ended, with our vampire heroine Seline (Beckinsale) being kidnapped and kept - literally - on ice. It's not long before she is rescued and determines to find out what happened to her lover ... in the meantime she seems to have picked up a daughter, the first true hybrid of Vampire and Lycan ... and of course all sides are interested in that.

The film suffers from the lack of a good male lead to counter Beckensale, and in particular a good Lycan ... it is interesting to see Kristen Holden-Ried from the TV Series Lost Girl playing a Lycan werewolf here, given that he plays the same monster on television. Overall it's a great adventure, full of lovely visuals and great performances. I think this is in part due to the 3D in which it was made. Even though we watch in 2D, the additional depth that the director is looking for in his shots results in a more imaginative use of the camera, and some lovely set pieces.

I enjoyed the film a lot, and I'm sure we'll revisit it soon. 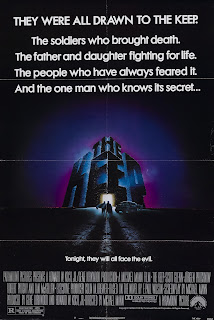 Next up is something of a lost treasure. I was unable to find a copy of The Keep on DVD to buy but a friend had an off-air copy recorded when it was shown on television, so I was able to revisit it. It's based on a tremendous F Paul Wilson novel of the same name, and directed by Michael Mann, better known for pop videos and adverts. The cast is brilliant, with Ian McKellen and Gabriel Byrne playing put-upon doctor and German officer. The plot is fairly original for this type of film: a platoon of German Nazi officers decide to occupy an old Keep in Rumania, not realising that the place is a trap for an ancient vampire which is being held there. The creature is set loose when one of the crosses keeping it in check is removed, and it then starts to kill the soldiers, gaining strength and solidarity with each murder, while beguiling the doctor with promises if he will help it escape ...

It's an eerie and evocative film thanks to Mann's superb camerawork, and there's one sequence where the vampire is depicted as a swirling creature made of smoke and fire which defies belief - that this was made in  1983 is incredible, the effect is brilliant and I've not seen anything quite like it since.

It's let down by some poor plotting towards the end, and perhaps a lack of sympathy when a second Nazi officer arrives and starts murdering the innocent village people (not the pop group) to try and uncover the identity of the killer ... and then there's a Highlander-like 'one' - a mysterious stranger who arrives to stop the vampire from emerging ... Not bad, but ultimately a little puzzling. However it is a great film, and well worth seeking out. It's all apparently available on YouTube if you can put up with seeing a whole film in that format. 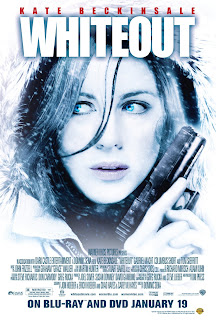 Finally, a 2009 thriller called Whiteout, starring Kate Beckinsale. Here she hangs up her vampire PVC and becomes a US Marshal investigating some killings in Antarctica. The film is a pretty straightforward whodunnit, where, in good old Agatha Christie style, the possible suspects are all killed off one by one.

In style it's a little like 30 Days of Night but without the vampires, or John Carpenter's The Thing but without the monster. As such it falls a little flat, as it needed something more than a man with an ice pick as a villain. But it's an entertaining watch, and some of the cinematography is very good.

The settings are nice, and there's a great sequence where they find something buried beneath the ice (see the similarities to The Thing) but it turns out to be a crashed plane.

Personally I wouldn't want to be out in all that ice and snow ... watching the film makes you chilly indeed.