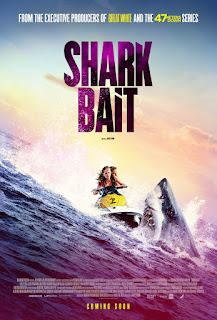 I love a good monster film ... and sometimes I think we don't get enough of them ... but this example falls back on a tried and tested trope: Sharks! Yes, those much-maligned denizens of the sea, who have a habit of being caught in tornados - or sharkenados - or terrorising innocent humans in everything from Jaws onwards.

Perhaps my favourite shark-menace film of recent years is The Shallows in which Blake Lively finds herself trapped on some rapidly submerging tidal rocks off a deserted beach as a highly intelligent shark attempts to snack on her ... and common with many of these films, the shark shows more intelligence than the humans it's trying to eat ... however with Lively, it might have met its match!

Which brings us to Shark Bait (called Jetski on IMDB, presumably an alternate title) ... another teens in trouble romp, where a group of dysfunctional kids on spring break - Nat (Holly Earl), Tom (Jack Trueman), Milly (Catherine Hannay), Tyler (Malachi Pullar-Latchman) and Greg (Thomas Flynn) - all with their own neuroses and sleeping with each other and angst and so on, head out to sea on a couple of stolen jet skis only to accidentally crash them into each other, leaving them all huddled on one ski, which of course won't now start. And one of them has broken their leg ... bleeding into the water ... 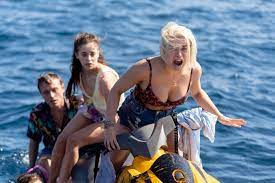 And that's more or less it. The kids are pretty hopeless and daft and you don't really care that much about them as they get picked off one by one by this shark ... the gore effects are realistic and nasty, and the water turns red on several occasions ...

Of course we have a Final Girl (I think she's Nat, but I could be wrong) who manages to outwit the shark, gets the jet ski mended and operational again, and heads to shore on some deserted beach somewhere - it's not clear where she ends up - but ol' sharkie is still out to get her ... even jamming itself between shallow rocks in an attempt to deprive her of her legs ... it's something of a daft scenario, and just how hungry must this shark be? It's already eaten four of her friends! Maybe it wanted some brains ... the one thing missing in this film.

Overall I found this to be a fun, but improbable, film. It's one where you have to leave your critical faculties at the door and just enjoy it - probably with some beer and friends. It's nicely made and the effects are excellent. The shark looks/seems real and it provides a tangible threat to the imperilled teens. Just don't expect anything more than a succession of deaths!

The only real issue is that shark attack films are very common ... and it's therefore hard to produce something which really stands out (as The Shallows managed).

SYNOPSIS: A group of spring-breakers enjoying a weekend in Mexico. After a big night of partying on the beach until dawn, the friends steal a couple of jet skis and take them out to sea, but end up in a horrific head-on collision. The group finds itself stranded miles from land and struggling with a badly injured friend. With no clear way home and predators circling in the choppy waters below, the true horror begins…